VR-Zone spotted a bunch of very interesting slides about Haswell over at Chiphell. The slides and information both look fairly believable so let's get with the analyzing shall we?

Haswell is Intel's next tock, meaning it's a brand new architecture. Haswell will debut sometime in 2013 on Intel's 22nm process, first introduced with Ivy Bridge at the beginning of 2012. The information on Haswell spans three major platforms: notebooks, desktops and Ultrabooks.

Haswell for Ultrabooks will be available in a 15W TDP, similar to where SNB based Ultrabooks are today. The big news here is Intel will move the PCH (Platform Controller Hub) onto the same package as the CPU, making the Ultrabook version of Haswell a single chip solution. With Sandy Bridge you needed two parts from Intel, the CPU and the PCH, with Haswell you only need the Haswell MCP (multi-chip package). That's two individual die on a single package, often the precursor to outright die integration (perhaps at 14nm?). The combined MCP should require a smaller footprint than the CPU + PCH arrangement we have today, allowing for less cramped (or smaller) motherboards and potentially even larger batteries in Ultrabooks. This is a huge move as it really starts to blur the line between Ultrabook and tablet hardware.

While Haswell for Ultrabooks tops out at two cores, you can get 2 or 4 core versions in notebooks and desktops.

Both the Ultrabook and notebook Haswell platforms will feature one of three different on-die GPU configurations: GT1, GT2 or GT3. Desktop Haswell will only be offered (as of now) in GT1 or GT2 configurations. No word on the differences between each configuration, but the fact that there are three in Haswell (vs 2 in SNB/IVB) indicates Intel may be exploring an ultra high performance GPU option to further encroach on discrete mobile GPU territory. An even higher performance GPU option for Haswell is something we hinted at in our Ivy Bridge architecture discussion. 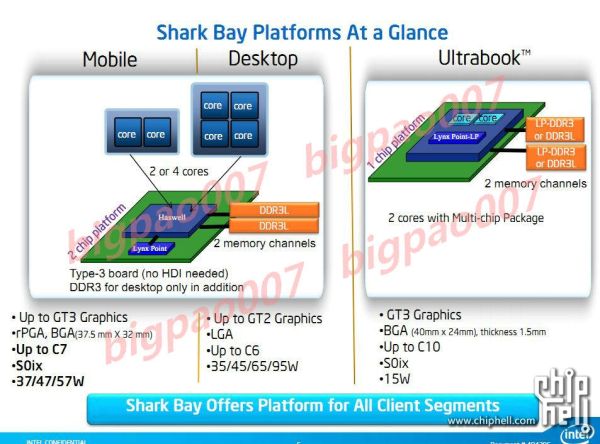 The list of memory support is also fairly power optimized. All three Haswell targets will support DDR3L, while the desktop version can use regular DDR3 and the Ultrabook version can use LPDDR3. All three implementations feature two memory channels.

It's important to note that despite Haswell's retarget to focus on 10 - 20W TDPs, the architecture appears to be capable of scaling nearly as high as Sandy Bridge (95W desktop parts will be available, although TDPs may not be directly comparable). This makes sense given that a single architecture can usually span an order of magnitude of TDPs without losing its edge.

Other Haswell features include integrated voltage regulators (should simplify things on the motherboard side), AVX 2.0 instruction support and of course things like AES-NI and Hyper Threading. Haswell will require a new socket: LGA-1150 for desktops.

Nothing here is really all that surprising. We knew that faster integrated graphics was coming, I am curious to see just how powerful this GT3 option will be. The true test is whether or not it will be enough to steer customers like Apple away from including a discrete GPU in their 15-inch Macbook Pro for example. From what I've heard, much of Intel's integrated graphics roadmap has been strongly "encouraged" by Apple.

The move to a single-chip solution for a high-end x86 CPU is a pretty significant step. That line between tablets and notebooks is going to become mighty blurry come 2013.