The What's Next Western Digital event back in May 2022 saw the introduction of new products in the WD_BLACK lineup. On the portable SSD (PSSD) front, the WD_BLACK P40 Game Drive SSD augmented the company's strong set of offerings in the gaming market. As a complement to the popular WD_BLACK P50 Game Drive SSD, the new PSSD retained the USB 3.2 Gen 2x2 (20 Gbps) link while adding RGB lighting to the case.

The P40 was launched at a much lower price point compared to the P50. In order to achieve the lower price point and make the P40 a mid-range offering, the company has cut some corners while still advertising the drive as a 2GBps-class one. The review below presents a detailed evaluation of the WD_BLCK P40 Game Drive SSD and compares it against a host of other PSSDs in the same capacity class. Our analysis reveals use-cases where the P40 does make sense to use without spending much more for the premium-class P50.

External bus-powered storage devices have grown both in storage capacity as well as speeds over the last decade. Thanks to rapid advancements in flash technology (including the advent of 3D NAND and NVMe) as well as faster host interfaces (such as Thunderbolt 3 and USB 3.x), we now have palm-sized flash-based storage devices capable of delivering 3GBps+ speeds. While those speeds can be achieved with Thunderbolt, mass-market devices have to rely on USB. Within the USB ecosystem, USB 3.2 Gen 2 (10 Gbps) is fast becoming the entry level for thumb drives and portable SSDs. Premium devices sporting the USB 3.2 Gen 2x2 (20 Gbps) interface have been making it to the market over the last couple of years, with host support in desktops and other computing platforms starting to pick up. Broadly speaking, there are five distinct performance levels in this market:

The PSSD we are looking at today - the WD_BLACK P40 Game Drive - belongs to the second category in the above list. Western Digital's WD_BLACK lineup of products targets the gaming market, with focus on performance numbers as well as industrial design / RGB lighting. The company has also been using the lineup to bring new technology to the market - such as the WD_BLACK P50 Game Drive SSD back in 2019. It was one of the first 20 Gbps PSSDs to hit the market when it was launched. This allowed the company to charge a premium for the high-performance product that continues to this day. In an attempt to expand the lineup with a mid-range offering, WD launched the P40 Game Drive SSD with very similar specs (up to 2000 MBps) earlier this year at a much lower price point.

The WD_BLACK P40 Game Drive SSD retains the industrial design and appearance of its premium sibling, while being slightly more compact. One of the key updates appreciated by the target market is the addition of RGB lighting (controllable via WD's dashboard software) to the case. Instead of supplying two separate cables, WD is providing a single Type-C to Type-C cable with an attached Type-C to Type-A adapter. 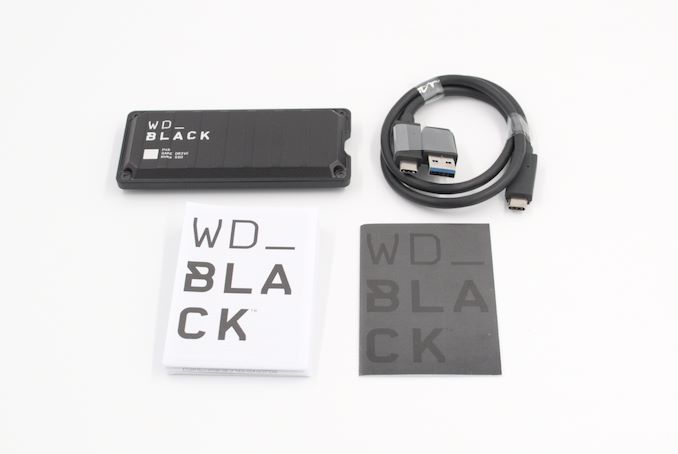 The solid aluminum metal casing lends a rugged look to the drive, and lays to rest any potential thermal concerns during operation.

CrystalDiskInfo provides a quick overview of the PSSD as seen by the host system. The P40 support S.M.A.R.T passthrough and TRIM, as shown in the screenshot below. Compared to the DRAM-equipped SN750E used in the P50, WD is using a DRAM-less SN560E in the P40. The cost-savings translate to the lower price on the P40 compared to the P50.

The table below presents a comparative view of the specifications of the different storage bridges presented in this review.

Prior to looking at the benchmark numbers, power consumption, and thermal solution effectiveness, a description of the testbed setup and evaluation methodology is provided.

The most attractive aspect of the Quartz Canyon NUC is the presence of two PCIe slots (electrically, x16 and x4) for add-in cards. In the absence of a discrete GPU - for which there is no need in a DAS testbed - both slots are available. In fact, we also added a spare SanDisk Extreme PRO M.2 NVMe SSD to the CPU direct-attached M.2 22110 slot in the baseboard in order to avoid DMI bottlenecks when evaluating Thunderbolt 3 devices. This still allows for two add-in cards operating at x8 (x16 electrical) and x4 (x4 electrical). Since the Quartz Canyon NUC doesn't have a native USB 3.2 Gen 2x2 port, Silverstone's SST-ECU06 add-in card was installed in the x4 slot. All non-Thunderbolt devices are tested using the Type-C port enabled by the SST-ECU06.

The specifications of the testbed are summarized in the table below:

The testbed hardware is only one segment of the evaluation. Over the last few years, the typical direct-attached storage workloads for memory cards have also evolved. High bit-rate 4K videos at 60fps have become quite common, and 8K videos are starting to make an appearance. Game install sizes have also grown steadily even in portable game consoles, thanks to high resolution textures and artwork. Keeping these in mind, our evaluation scheme for direct-attached storage devices involves multiple workloads which are described in detail in the corresponding sections.

In the next section, we have an overview of the performance of the WD_BLACK P40 Game Drive SSD in these benchmarks. Prior to providing concluding remarks, we have some observations on the device's power consumption numbers and thermal solution also.