Among the spate of announcements from NVIDIA today as part of their fall GTC 2022 event, the company is delivering a surprising shake-up to their DRIVE automotive SoC plans. Effective immediately, NVIDIA has cancelled Atlan, their planned post-Orin SoC for 2025 automobiles. In its place, NVIDIA is announcing Thor, an even more powerful SoC set to launch in the same 2025 timeframe.

NVIDIA’s Atlan SoC was first revealed back at spring GTC 2021, where NVIDIA announced it as their next-generation automotive SoC to succeed the (now current) Orin SoC. At the time of its announcement, Atlan was planned to be a high-performance SoC offering 1000 TOPS of INT8 inference performance, using a next-generation (Lovelace) GPU design and next-generation Grace CPU design. The chip even integrated a BlueField DPU as a networking and security processor, with the intent of delivering a single SoC that could handle all of the compute functions required by a self-driving car. 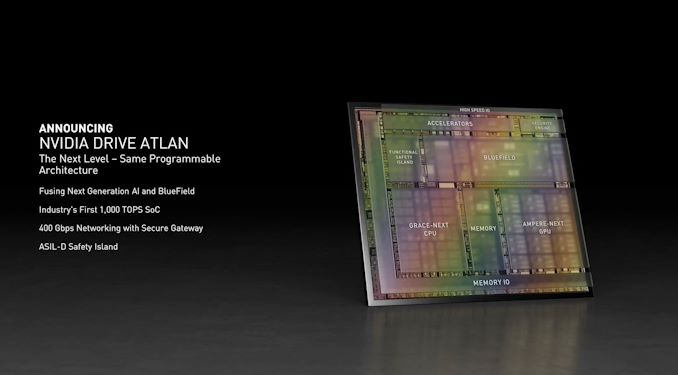 But whatever Atlan was meant to be, now it’s no more. As of NVIDIA new DRIVE SoC roadmap, Atlan has been scrapped. In its place is a new SoC, Thor, which is slated to be even more powerful than what NVIDIA had planned for Atlan.

Like the Atlan announcement in 2021, NVIDIA is only releasing a handful of details about Thor this far ahead of its release. The high-level details include that, while not naming specific NVIDIA CPU and GPU architectures, the SoC is tapping features that were first introduced with the Grace CPU, Ampere GPU architecture, and Lovelace GPU architecture. Meanwhile, NVIDIA’s blog post on the matter does go one further, stating that the SoC uses an Automotive Enhanced (AE) version of Arm’s thus far secretive Poseidon CPU core. Of what little we know about Poseidon, it is a next-generation high-performance CPU core being developed by Arm that will be used in their next-generation Neoverse V-series platform, replacing the just-released Neoverse V2.

Notably, packing in all of this performance is going to make Thor a very bulky chip. While NVIDIA is not announcing the process node, they are already saying that it will use 77 billion transistors, which is all of 3 billion transistors less than their new flagship GH100 GPU. NVIDIA’s performance claims don’t indicate whether matrix sparsity is in use, but even if it is that will put Thor at half the FP8 performance as NVIDIA’s flagship GPU. All of which underscores NVIDIA’s extreme performance goals for the planned SoC.

And while NVIDIA’s mockup for the chip shows it on an AGX board in a single chip configuration, today’s announcement also makes explicit mention of NVLink chip-to-chip (NVLink-C2C) chip interconnect technology. This is a curious mention, since NVIDIA’s key art doesn’t show Thor as being chiplet-based. This may mean that NVIDIA is instead going to use NVLink-C2C for even more powerful multi-chip DRIVE AGX boards (ala Pegasus), or it could very well be that Thor is a chiplet-based design and NVIDIA is being purposely generic with their art.

Beyond that, NVIDIA is not offered any further technical details on the SoC. So details on the memory type used, the GPU architecture, and other functional blocks remains to be seen.

At this point, NVIDIA has also not detailed why they cancelled Atlan in place of Thor. Thor is certainly a more powerful design and would seem to incorporate some newer features not found on (or at least never disclosed for) Atlan. Whether this means NVIDIA is somehow pulling in what would have been a post-Atlan chip or if they have tossed Atlan because their customers need better AI inference performance for their self-driving cars remains to be seen.

Hardware upgrades aside, what is clear is that NVIDIA is designing Thor for the same market segment as Atlan. Which is to say it’s meant to be a high-performance single-chip design for handling all of the computational needs of a self-driving car, from infotainment systems and sensor fusion up to the actual self-driving algorithms themselves. As with Atlan, the goal is to replace what are currently separate computers within a car with a single computer that does it all, leveraging the functional safety design techniques with extensive isolation (including MIG) to keep the separate tasks from interfering with each other.

Perhaps the most surprising thing of all, however, is that this change in SoCs is not expected to impact NVIDIA’s SoC delivery date. NVIDIA says that they’ll have Thor in automakers’ hands for their 2025 cars, the same timeframe that Atlan was intended to arrive in. So while the devil is in the details, at a high level NVIDIA is aiming to deliver Thor near the same time as they would have delivered Atlan. It is worth noting, however, that while NVIDIA had previously announced that Atlan would be sampling in 2023, no such announcement has been made about Thor. As such, Thor’s sampling date may end up being later than what would have been Atlan’s.