Today's model on the test bench is the MSI MPG Z690 Carbon WIFI with a solid feature set that includes 2.5 GbE and Wi-Fi 6E networking, two full-length PCIe 5.0 capable slots, four PCIe 4.0 x4 M.2 slots, as well as a large 19-phase power delivery. The MPG Z690 Carbon WIFI is positioned in the mid-range segment of the market, but at the $350-400 price point, MSI does have some stiff competition. It's time to see how the Z690 Carbon WIFI stacks up and if its gaming-focused model below its enthusiast-level MEG series can deliver the goods.

MSI has a few key ranges that target users looking to build different types and levels of systems to differentiate its various levels of motherboards. Its Pro series targets professionals and SMBs, and its MPG (Performance Gaming) range is aimed at gamers looking to maximize frame rates and performance. It has motherboards for all different scenarios, including its MEG (Enthusiast Gaming) range reserved for its flagship and high-spec models and the MAG (Arsenal Gaming) series offering competitive controller sets and features at lower entry price points.

The flagship models, such as the MEG Z690 Godlike, offer almost everything any user could need on a desktop platform. Of course, any of MSI's Z690 models could be used for various and combined workloads, including rendering, image manipulation, and gaming. Still, each series focuses on different price points and varying levels of controller support. 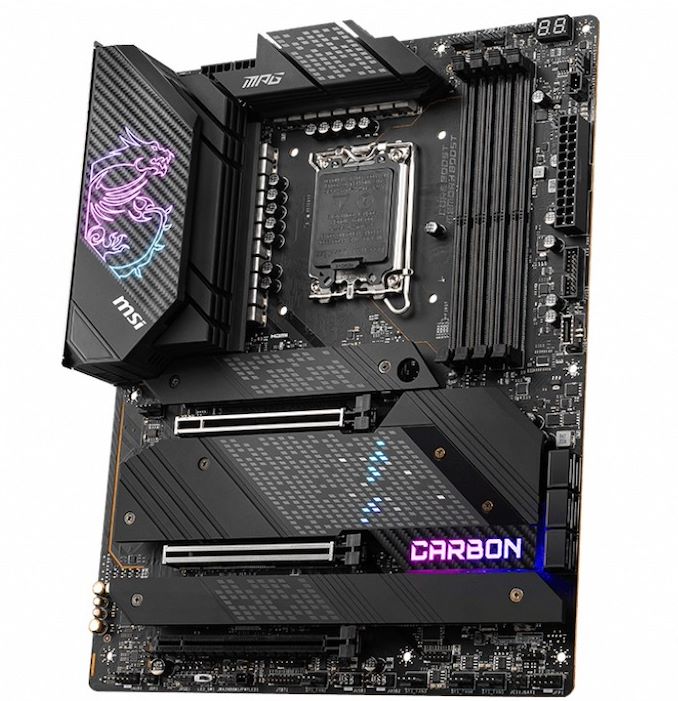 Taking a look at the MSI MPG Z690 Carbon WIFI, it is based around a carbon fiber aesthetic, with black heatsinks covering an all-black PCB. MSI includes a customizable RGB Dragon logo on the rear panel cover, with an RGB Carbon logo that is also customizable on the chipset heatsink. Across the middle section of the board is another customizable RGB LED zone, with the M.2 heatsinks and chipset heatsink also encompassing a futuristic and neat grey and black patterning. MSI does offer users further customization avenues via one 4-pin and three 3-pin RGB LED connectors. 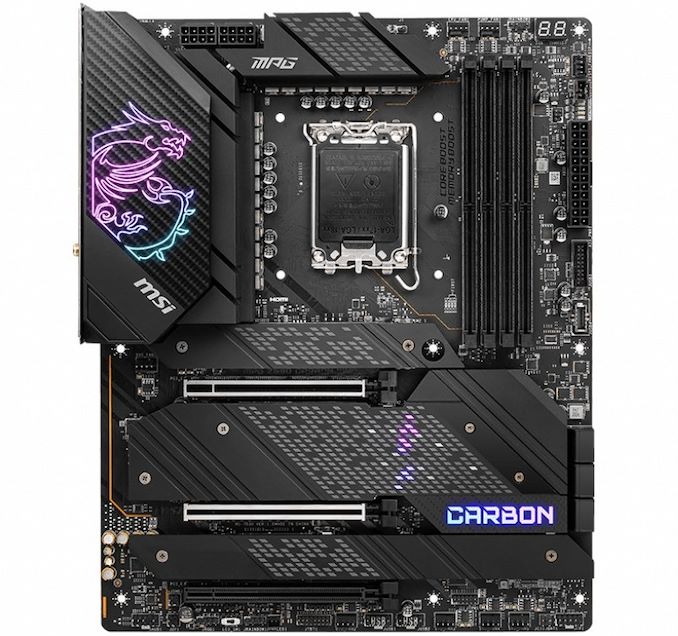 The board's PCIe and storage slots are on the bottom half of the MPG Z690 Carbon WIFI. Sandwiched between swathes of covers and heatsinks are a pair of full-length PCIe 5.0 slots that can operate at x16/x0 or x8/x8, with a third full-length slot electronically locked down to PCIe 3.0 x4. Regarding storage, MSI includes a total of five M.2 slots, three of which allow support for PCIe 4.0 x4 M.2 drives, one with PCIe 4.0 x4 and SATA support, and a fifth with support for PCIe 3.0 x4 and SATA. For conventional storage or devices such as optical drives, MSI includes six SATA ports in total, four of which are powered by the chipset and support RAID 0, 1, 5, and 10 arrays, and two via an ASMedia ASM1061 SATA controller. 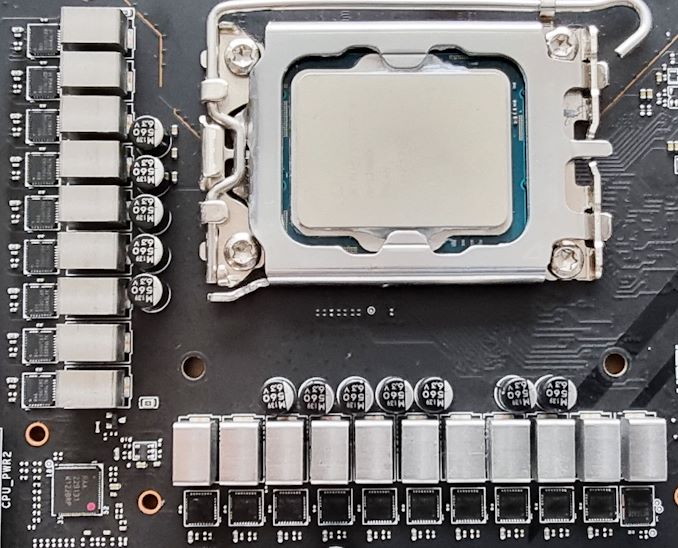 Focusing on the power delivery, MSI is using a direct 18+1+1 phase design with eighteen Renesas 220075R0 75 A power stages for the CPU VCore, and one Renesas 220075R0 75 power stage for the iGPU. Controlling the power delivery is a Renesas RAA229131 20-phase PWM controller with the power delivery operating at 18+1. It represents a straightforward one-phase-per-channel design without teaming, pairing, or doublers. Powering the board's CPU VCAUX voltage is a single Monolithic Power Systems M2940A PWM controller that drives one MP87992 70 A power stage, making the design an 18+1 (CPU VCore/iGPU) and 1+0 (VCCAUX), which by all accounts is a premium power delivery capable of overclocking Intel's unlocked 12th Gen Core even further. 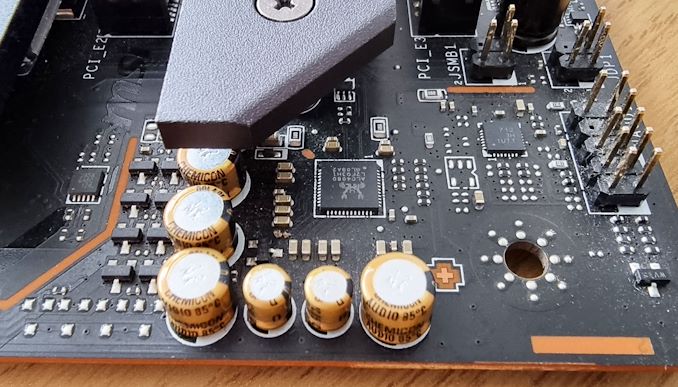 The MSI MPG Z690 Carbon WIFI has a decent onboard audio solution that uses a Realtek ALC4080 HD audio codec. The HD audio codec itself doesn't have any EMI shielding, but it is slightly covered by an extended dual M.2 heatsink between the bottom two full-length PCIe slots. Seven Japanese Gold Nichicon audio capacitors supplement this, and MSI includes a line of PCB separation from the rest of the board's controllers and componentry.

On the rear panel, MSI includes a large variety of input and output consisting of one USB 3.2 G2x2 Type-C, five USB 3.2 G2 Type-A, and four USB 2.0 ports. Also present is a pair of video outputs, including one HDMI 2.1 and one DisplayPort 1.4 output, as well as a decent networking array with a single Intel I225-V 2.5 GbE controller and an Intel AX211 Wi-Fi 6E CNVi. MSI also has a competitive onboard audio solution with five 3.5 mm audio jacks and single S/PDIF optical output powered by a Realtek ALC4080 HD audio codec.

Finishing off the rear panel is a small BIOS Flashback button with the associated USB port highlighted by a white rectangular ring. Users looking for the CMOS battery can find it sitting behind the audio input/output array, with the jumper pings located on the bottom row of the board's header selection. 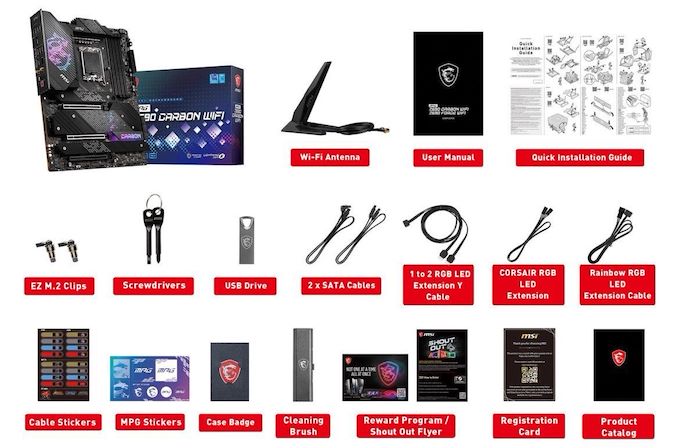 Included with the board within the retail packaging is a modest yet ample selection of accessories to get users going right out of the box. This includes two black SATA cables, three RGB LED extension cables, a nifty cleaning brush, a case badge, a pair of screwdrivers, EZ install M.2 clips, a USB flash drive with the board's software and drivers, user manuals, and an Intel AX211 Wi-Fi 6E antenna.

The MSI MPG Z690 Carbon WIFI has an MSRP of $400, but it can be purchased (at the time of writing) at Amazon for $350 or at Newegg for the slightly higher price of $369. In terms of competition, several boards in the $350 to 400 price range also offer strong competition. These include models such as the ASUS ROG Strix Z690-F Gaming WIFI at $368, as well as GIGABYTE's popular Z690 Aorus Master, which we've previously reviewed and benefits from 10 GbE networking, and it is currently on sale at Newegg for $320 (at the time of writing).

Given the levels of solid competition at the price point with all the vendors looking to offer users the best value for their money, if you can consider a $350 to 400 value, then MSI has plenty to do. The MSI MPG Z690 Carbon WIFI does have plenty going for it, including Wi-Fi 6E, five M.2 slots, and a solid 19-phase power delivery. Still, the proof is always in the pudding (performance), and it's time to see how it stacks up against other Z690 models we've tested, including GIGABYTE's very attractive-looking Z690 Aorus Master.