The latest flagship desktop processor from Intel, the Core i9-11900K, has been out for over a month, and we've been busy putting numerous Z590 motherboards on tests to see how some of the motherboard options stack up against each other. Up for analysis today is GIGABYTE's Z590 Aorus Master, which is one of its premium models and has plenty of high-quality features and controllers onboard. Based on the Aorus gaming series, the Z590 Aorus Master includes 10 gigabit Ethernet, Wi-Fi 6E, three M.2 slots, and large power delivery. From the specifications, it's a behemoth but with an attractive price tag when compared to the flagship Z590 offerings.

From our experience with previous generations of Intel's premium desktop chipsets, including Z490, Z390, Z370, etc., we've seen numerous trends of motherboard vendors stacking features onto its PCBs. Ultimately, the better the feature set, the more it costs, which is understandable, but Intel's Z590 offers some of Intel's biggest updates from a desktop-based chipset from them in years.

Aside from the PCIe 4.0 support that the 11th generation Rocket Lake processors bring to the table, the Intel Z590 chipset, when paired with Rocket Lake, effectively doubles the bandwidth between the CPU and chipset's DMI to x8, as well as native support for Wi-Fi 6E CNVi, which uses the latest 6 GHz Wi-Fi band for uninterrupted wireless access. Another addition native USB 3.2 Gen2x2  connectivity, which is fantastic for content creators and users with compatible devices.

As far as premium GIGABYTE Z590 models go, the Z590 Aorus Master sits just behind GIGABYTE's flagship water-cooled Z590 Aorus Xtreme WaterForce and air-cooled Z590 Aorus Xtreme models. Regarding usable and core features, the Z590 Aorus Master has pretty much what you would expect from a mid-premium model. What GIGABYTE does have is plenty to focus on, including a nice aesthetic, with a predominately black PCB, black heatsinks, and black and silver PCIe slot armor, as well as matching M.2 heatsinks. 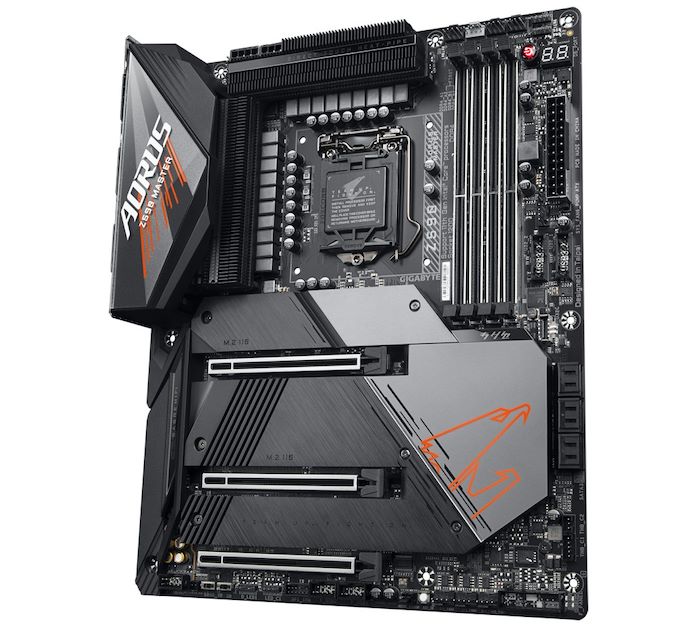 Focusing on the features, there are three full-length PCIe slots, all with GIGABYTE's metal slot reinforcement, with the top two slots operating at PCIe 4.0 x16 and x8/x8, with the third electronically locked down to PCIe 3.0 x4 from the chipset. Regarding memory support, GIGABYTE has QVL'd memory up to DDR4-5400, which is impressive, and the four slots can accommodate up to 128 GB. GIGABYTE also includes three PCIe M.2 slots, with one operating at PCIe 4.0 x4 and the other two at PCIe 3.0 x4, with the Gen 3 pairing also with support SATA based SSDs. There are also six SATA ports for conventional storage devices and optical drives, with RAID 0, 1, 5, and 10 arrays supported across all six ports.

The networking is as good as it gets on a desktop motherboard with a 10 GbE controller and Intel's latest Wi-Fi 6E CNVi. The rear panel includes USB 3.2 G2x2 Type-C, with an internal USB 3.2 G2 Type-C front panel header located below the memory slots. GIGABYTE uses an amped-up onboard audio solution with a premium HD audio codec and DAC combination, with one Displayport 1.2 video output for users intending to leverage Intel's integrated graphics. 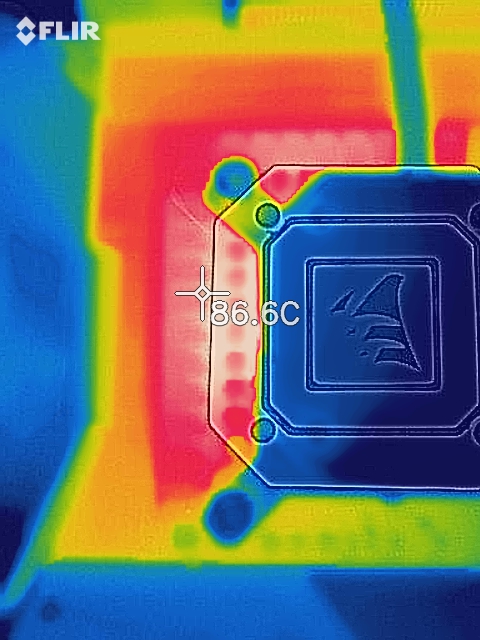 When we overclocked the GIGABYTE Z590 Aorus Master, we saw very tight VDroop control with the default load-line calibration settings on its large 18-phase CPU setup for the power delivery. We managed to get 5.2 GHz all-core on our Core i9-11900K, despite the large 413 W power draw from the wall with a maximum core temperature of 88 degrees Celsius. The performance went up incrementally in our POV-Ray benchmark, with some hit to performance at 5.2 GHz, which is likely related to the thermals or possibly built-in power limitations. We also tested the thermal capability of the power delivery, and although warmer than we expected, we did observe temperatures ranging from 71 to 78ºC with our K-Type thermocouples and the integrated temperature sensor on the board.

At present, the GIGABYTE Z590 Aorus Master is available for $410 at Amazon, which is a fair price considering the mixture of premium controllers and features. This is similar to the ASRock Z590 Taichi, which is available for $430 at Newegg and includes Thunderbolt 4, but take away the Thunderbolt 4, and the Master has the better overall specifications on paper, especially within its power delivery capabilities. Other boards to consider are the ASUS ROG Strix Z590-E Gaming WIFI ($380) and the MSI MEG Z590 Ace ($500), which both should be judged on their own merits. GIGABYTE looks to dominate the market below the flagship models. The Z590 Aorus Master looks to solidify its position as a leading model with 10 GbE, Wi-Fi 6E, and plenty of other high-quality features.