Sometimes less is more, and when it comes to motherboards the mini-ITX form factor has some of the most enthusiastic fan club members. Small form factor systems are becoming more widely used as we're ushered into a single graphics card setup dominated landscape. and in terms of features to price, the B550 chipset has some of the most cost-effective of any current desktop platform. One such board is the GIGABYTE B550I Aorus Pro AX which combines a wave of premium features combined with AMD's B550 chipset. It includes compatibility for PCIe 4.0 devices with supported processors, dual PCIe M.2 slots, and 2.5 gigabit Ethernet. It's time to give our verdict on it and see if it can cut it in a very competitive small is more market.

One of GIGABYTE's most scalable ranges is its Aorus series, which typically aims its feature set and aesthetics at gamers. Often clad in RGB enabled heatsinks and componentry, the Aorus series is now GIGABYTE's most widely recognizable range, which stretches from the larger E-ATX to small-sized mini-ITX offerings in motherboards, but also covers graphics cards, laptops, and all manner of other components.

Focusing on the mini-ITX form factor, the range on offer is considerably more competitive than the ATX market for a couple of reasons. The first is that there are much fewer small form factor models available, meaning manufacturers are limited in what they can do and need to strive to get the right solution, sometimes at the first time of asking. The second is that with less to choose from, it's key in getting a model that fits the desired feature set and for the rest of the hardware to fit the whole aspect of a system build. 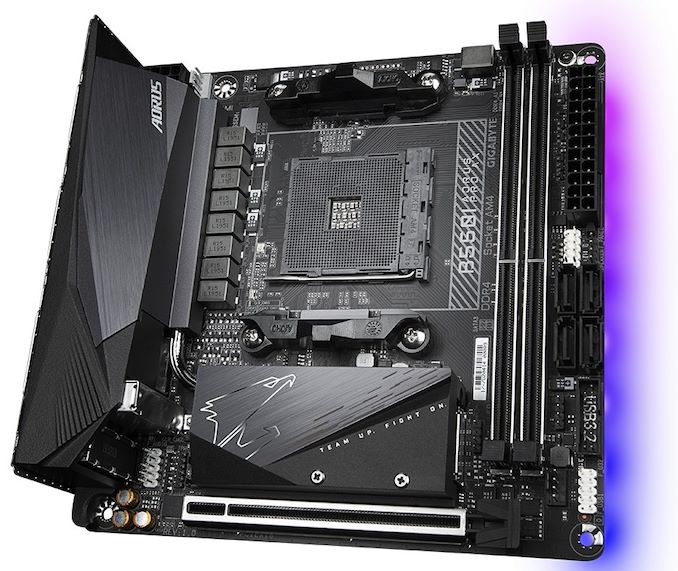 Less is more in some cases, but fewer PCIe slots available means less room for the addition of controllers such as networking, storage, and other devices. Focusing primarily on what the GIGABYTE B550I Aorus Pro AX has to offer, it blends subtle black and grey tones for an elegant look, with the board's integrated RGB located along the right-hand side of the board for a rainbow infused under glow effect. While having a look that should fit into most systems in terms of aesthetics, the mini-ITX Aorus Pro AX has plenty of features. This includes a PCIe 4.0 x4 M.2 slot located on the front and a PCIe 3.0 x4/SATA M.2 slot on the rear, with four SATA ports, and two memory slots capable of support up to DDR4-5100 memory, with a total capacity of 64 GB. Looking at networking, it uses a premium 2.5 GbE controller with a Wi-Fi 6 interface pairing. Simultaneously, the onboard audio solution is also good, which one expects from a mid-range model.

Putting the GIGABYTE through our testing suite, the B550I Aorus Pro AX performed well in the majority of our system tests, with good showings in all three power tests, as well as in our POST time testing. DPC latency performance was average at best, and it performed competitively when compared to other AM4 based models tested with our Ryzen 7 3700X processor in our CPU and gaming tests. 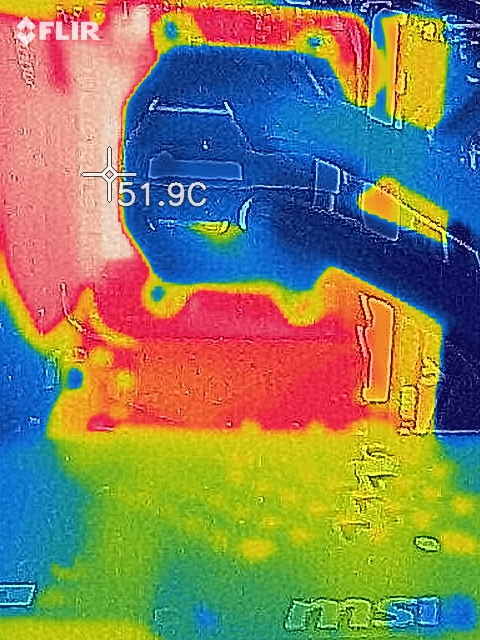 In our overclock testing, the Aorus Pro AX performed as expected, with its premium 8-phase power delivery consisting of six 90 A power stages for the CPU VCore, and two 90 A power stages for the SoC. We saw good VDroop control under load, with consistent performance increases in our testing as we ran each frequency. Even under full-load with lots of CPU VCore to stress the power delivery, it performed very well for a mini-ITX sized model, with competitive temperatures when compared to other AM4 models.

The GIGABYTE B550I Aorus Pro AX plays to the strengths of the X570 chipset, as a B550 mini-ITX board can only include so much, so it benefits from the small form factor with full PCIe 4.0 support as opposed to an ATX sized variant. At present, the B550I Aorus Pro AX is available at Amazon for $179, which is a little cheaper than MSI's MPG B550I Gaming Edge WiFi model at $185, and ASRock's B550 Phantom Gaming-ITX/AX at $200. All three of these models, including similar feature sets, including premium integrated audio, 2.5 GbE networking, and Wi-Fi 6 capabilities. The end decision could come down to performance, memory compatibility, and other aspects such as power delivery, rear panel I/O connectivity, which all three models include respectable offerings, but for GIGABYTE's model, it's time to see how it stacks up against other model's we've tested.

Read on for our extended analysis and comparison tests.