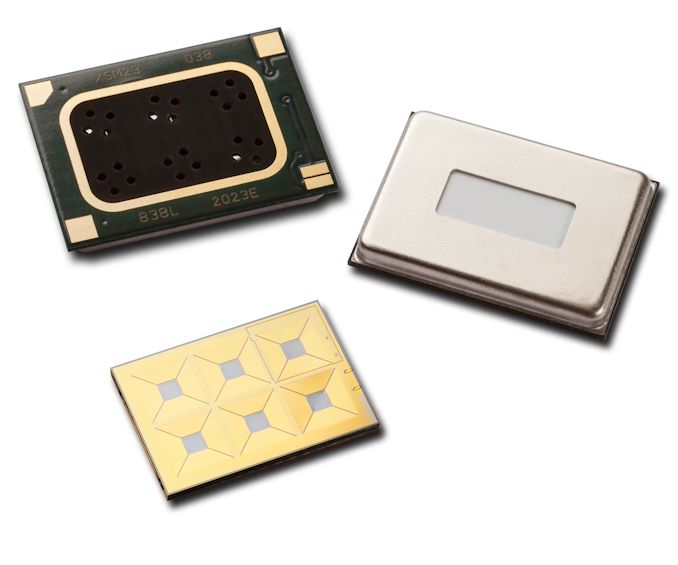 Speakers aren’t traditionally part of our coverage, but today’s announcement of xMEMS’ new speaker technology is something that everybody should take note of. Voice coil speakers as we know them and have been around in one form or another for over a hundred years and have been the basis of how we experience audio playback.

In the last few years, semiconductor manufacturing has become more prevalent and accessible, with MEMS (Microelectromechanical systems) technology now having advanced to a point that we can design speakers with characteristics that are fundamentally different from traditional dynamic drivers or balanced armature units. xMEMS’ “Montara” design promises to be precisely such an alternative. 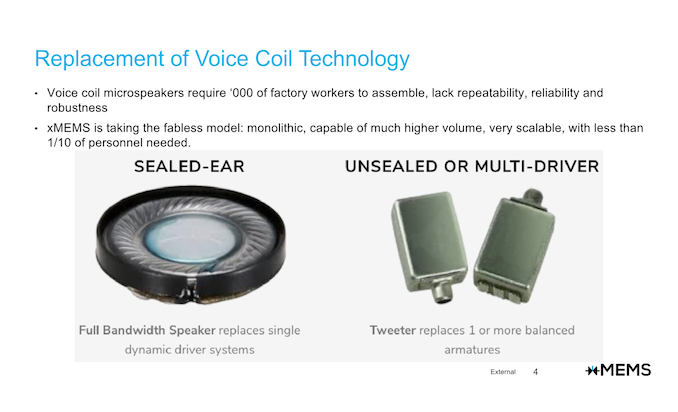 xMEMS is a new start-up, founded in 2017 with headquarters in Santa Clara, CA and with a branch office in Taiwan. To date the company had been in stealth mode, not having publicly released any product till today. The company’s motivations are said to be breaking decades old speaker technology barriers and reinventing sound with new innovative pure silicon solutions, using extensive experience that its founders have collected over years at different MEMS design houses.

The manufacturing of xMEMS’ pure silicon speaker is very different to that of a conventional speaker. As the speaker is essentially just one monolithic piece manufactured via your typical lithography manufacturing process, much like how other silicon chips are designed. Due to this monolithic design aspect, the manufacturing line has significantly less complexity versus voice coil designs which have a plethora of components that need to be precision assembled – a task that is quoted to require thousands of factory workers.

The company didn’t want to disclose the actual process node of the design, but expect something quite crude in the micron range – they only confirmed that it was a 200mm wafer technology. 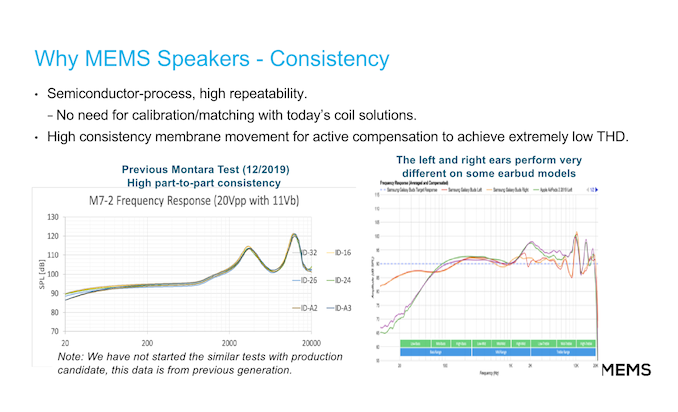 Besides the simplification of the manufacturing line, another big advantage of the lithographic aspect of a MEMS speaker is the fact that its manufacturing precision and repeatability are significantly superior to that of a more variable voice coil design. The mechanical aspects of the design also has key advantages, for example higher consistency membrane movement which allows higher responsiveness and lower THD for active noise cancellation. 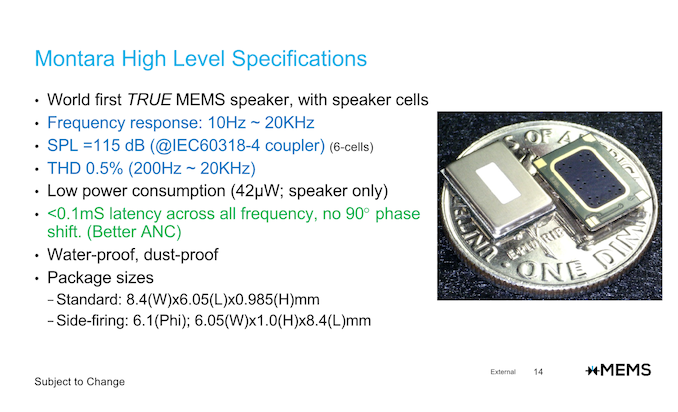 xMEMS’ Montara design comes in an 8.4 x 6.06 mm silicon die (50.9mm²) with 6 so-called speaker “cells” – the individual speaker MEMS elements that are repeated across the chip. The speaker’s frequency response covers the full range from 10Hz to up to 20KHz, something which current dynamic driver or balanced armature drivers have issues with, and why we see multiple such speakers being employed for covering different parts of the frequency range.

The design is said to have extremely good distortion characteristics, able to compete with planar magnetic designs and promises to have only 0.5% THD at 200Hz – 20KHz.

As these speakers are capacitive piezo-driven versus current driven, they are able to cut power consumption to fractions of that of a typical voice coil driver, only using up 42µW of power. 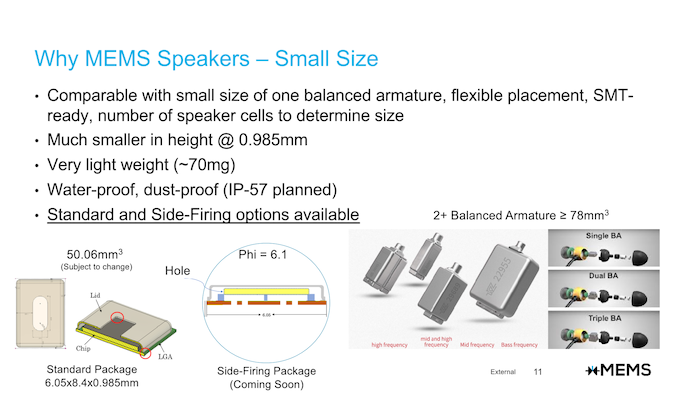 Size is also a key advantage of the new technology. Currently xMEMS is producing a standard package solution with the sound coming perpendicularly out of the package which has the aforementioned 8.4 x 6.05 x 0.985mm footprint, but we’ll also see a side-firing solution which has the same dimensions, however allows manufacturers to better manage internal earphone design and component positioning. 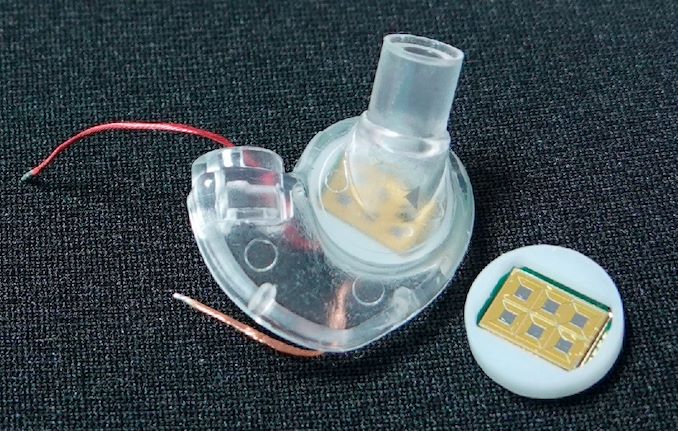 In the above crude 3D printed unit with no optimisations whatsoever in terms of sound design, xMEMS easily managed to design an earphone of similar dimensions to that of current standard designs. In fact, commercial products are likely to looks much better and to better take advantage of the size and volume savings that such a design would allow. 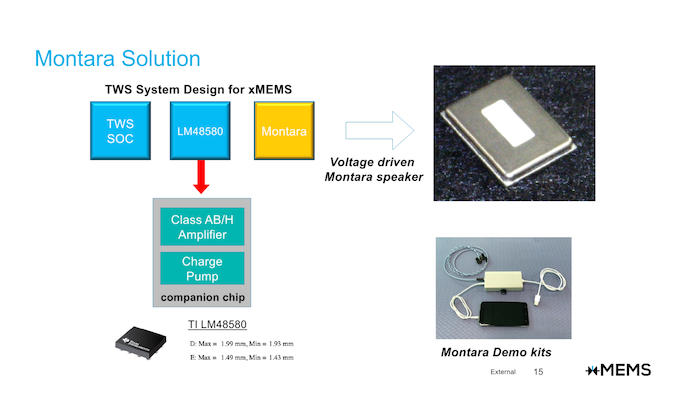 One key aspect of the capacitive piezo-drive is that it requires a different amplifier design to that of classical speaker. Montara can be driven up to 30V peak-to-peak signals which is well above the range of your existing amplifier designs. As such, customers wishing to deploy a MEMS speaker design such as the Montara requires an additional companion chip, such as Texas Instruments’ LM48580.

In my view this is one of the big hurdles for more widespread adoption of the technology as it will limit its usage to more integrated solutions which do actually offer the proper amplifier design to drive the speakers – a lot of existing audio solutions out there will need an extra adapter/amp if any vendor actually decides to actually make a non-integrated “dumb” earphone design (As in, your classical 3.5mm ear/headphones).

TWS (True wireless stereo) headphones here obviously are the prime target market for the Montara as the amplifier aspect can be addressed at design, and such products can fully take advantage of the size, weight and power advantages of the new speaker technology. 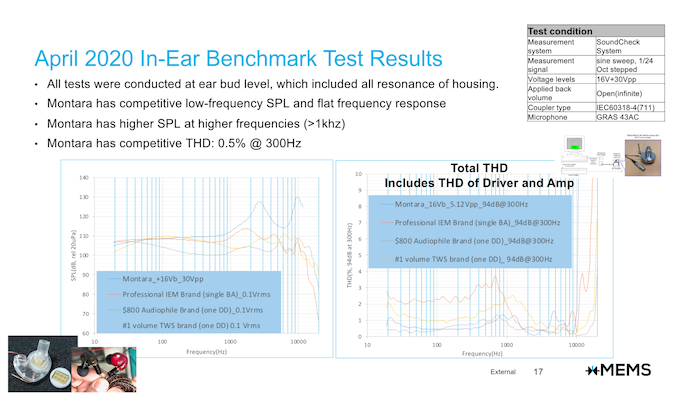 In measurements, using the crude 3D-printed earphone prototype depicted earlier, xMEMS showcases that the Montara MEMS speaker has significantly higher SPL than any other earphone solution, with production models fully achieving the targeted 115dB SPL (The prototype only had 5 of the 6 cells active). The native frequency response here is much higher in the higher frequencies – allowing vendors headroom in order adapt and filter the sound signature in their designs. Filtering down is much easier than boosting at these frequencies.

THD at 94dB SPL is also significantly better than even an unnamed pair of $900 professional IEMs – and again, there’s emphasis that this is just a crude design with no audio optimisations whatsoever. 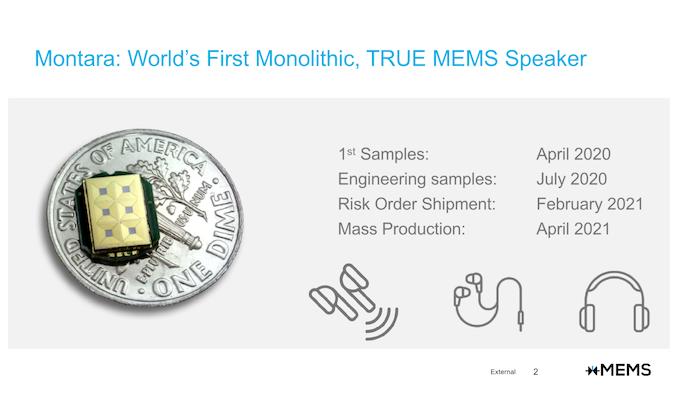 In terms of cost, xMEMS didn’t disclose any precise figure, but shared with us that it’ll be in the range of current balanced armature designs. xMEMS’ Montara speaker is now sampling to vendors, with expected mass production kicking in around spring next year – with commercial devices from vendors also likely to see the light of day around this time.