On the back of AMD’s successful Ryzen Mobile 4000 series launch for consumer laptops, the company today launching its range of commercial processors from the same family. These processors are designed for the standard commercial verticals typically associated with company contracts, education deployments, medical use cases and any environment that requires a level of manageability across its workforce. The new AMD processors have up to eight of the latest Zen 2 cores, up to Vega 7 compute graphics, and are built on the latest TSMC 7nm process node technology.

AMD’s Ryzen Pro hardware, much like Intel’s vPro, are commercial platforms. Commercial markets are similar to consumer markets, but rather than aiming to sell to users individually, commercial markets involve company-wide distribution of large numbers of units that are managed by a central IT team. For example, a global company might request 10000 units as part of its 3-5 year cyclical upgrade strategy – these units might be purchased outright from an OEM, or leased, depending on the contract. As a result, these devices typically have to adhere to a rigid structure to ensure full administrative capabilities (deployment, imaging, monitoring) while also minimizing downtime. If a company wants to deploy a stable confirmed software update over those 10,000 machines, it could be done at the click of a button on the admin side. 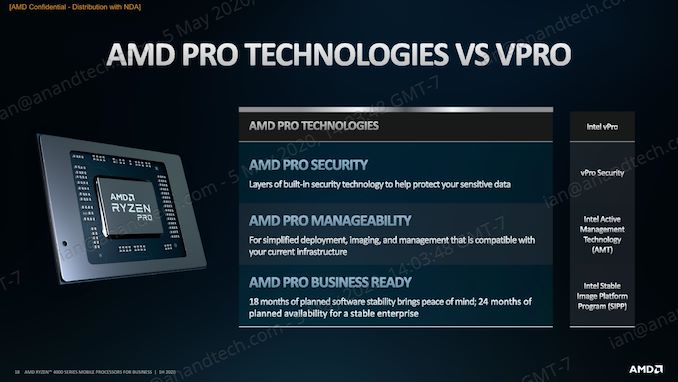 While this seems like an easy adjustment at the hardware level, it can be asked about what happens at the processor level to enable this. This is why AMD creates its own Ryzen Pro product lines specifically for these markets. These processors have specific features turned on, that aren’t turned on in consumer products – this also means that these processors require additional validation at the manufacturing level to ensure that these Pro features work.

This includes security, such as AMD’s Memory Guard which enabled full encryption for when a system is in hibernate mode/ a consumer laptop will still have data in memory, or in a stored page file, potentially unencrypted, open to attack. However a Ryzen Pro machine will keep it encrypted while in that hibernate mode. There are also additional collaborations on security with OEM partners, such as Lenovo’s Self-Healing BIOS and ThinkShield, HP’s Sure like of security, and then additional benefits in Windows. 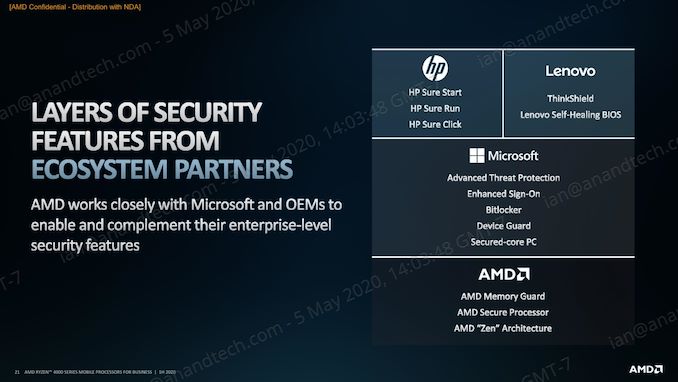 There is also additional ecosystem stability metrics that these customers often require, such as a guarantee of company shipments of parts for at least 24 months with no iterative updates (e.g. the chip isn’t moved to a new process), and a guarantee that there will be OS image stability over 18 months. This isn’t unique to AMD, however it is part of the AMD package. Obviously AMD is citing the recent rise in Work-From-Home users as the key time to launch its new product line.

For the new hardware, AMD will be launching three Ryzen Pro 4000 series processors. These include a Ryzen 7 Pro, a Ryzen 5 Pro, and a Ryzen 3 Pro, all aimed at mobile devices with a TDP of 15 W.

The first products with the new Ryzen Pro 4000 Mobile Series processors are from Lenovo, namely several series of ThinkPads, which are the often quoted brand identifier that a product is ready for commercial use. The T14, T14s, X13, and L14/L15 Series (all Gen 1) will all use these new processors, offering 14-20 hours of battery life depending on the model. Technically Lenovo already announced the T14 and T14s back in February. 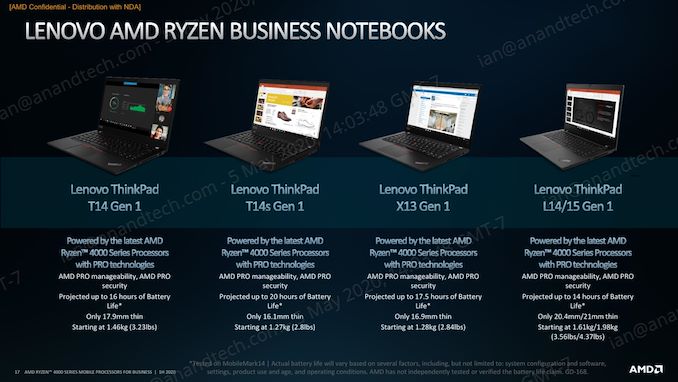 These machines will be available shortly, depending on region. Other Ryzen Pro devices are expected to be announced over the course of the next few months.