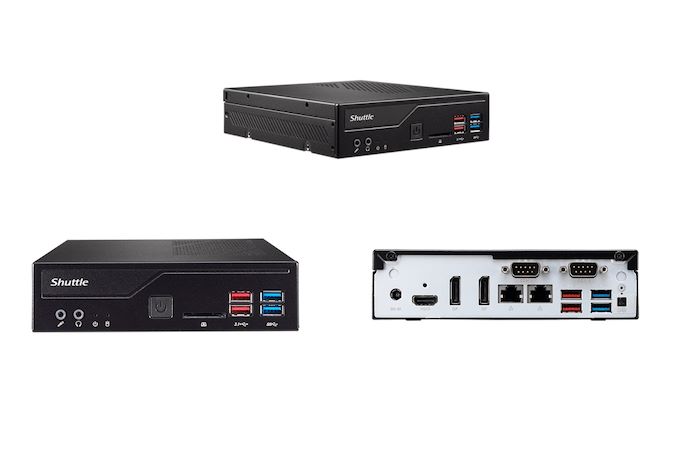 Small form-factor (SFF) machines have predominantly used 5W - 45W TDP processors. The introduction of the mini-STX form-factor standardized a compact form factor for systems with processors having a TDP up to 65W. However, the mini-STX form-factor along with the associated cooling system is still too bulky for certain use-cases. Most systems built in that form-factor have considerable z-height to accommodate a reasonably standard heat-sink and a single fan. The resulting system volume is between 1.54L and 1.92L, depending on the chosen chassis.

Shuttle's XPC slim line aims to serve the market segment requiring standard desktop processors in a compact form factor. These computers are a fit for a variety of business and commercial use-cases. This review takes a look at the performance and features of a system built on the Shuttle XPC slim DH370 barebones platform.

Shuttle's XPC slim line-up includes two different form-factors - the XH series uses a 17cm x 17cm motherboard in a 3.5L chassis, while the DH series uses a slightly smaller board in a 1.35L chassis. The DH370 we are looking at today belongs to the latter category. The product is sold 'barebones' similar to the mini-STX products in the market (and unlike the NUCs). The board is socketed, and the end user can opt to install any Coffee Lake-S CPU (up to 65W TDP) in the system. The RAM (DDR4 SO-DIMMs) and storage drive(s) (M.2 NVMe and/or 2.5" SATA drive) have to be added by the user. Shuttle supplies a dual-fan proprietary cooling solution along with the system. The choice of CPU makes it similar to a DIY build in many respects.

The barebones version of the DH370 is complemented by a rich set of optional accessories to better fit particular use-cases. These include the ability to replace one of the two COM ports with a VGA display output port (using the PVG-01), adding Wi-Fi capabilities (using the WLN-M WLAN card and antennae), ability to trigger power switching when the unit is installed in a hard-to-reach location (using the 2m long CXP01 cable for an external power switch), a rackmount kit allowing for the installation of two XPC slim units in a 2U slot (PRM01), and stands (PS02) for vertical orientation of the system. 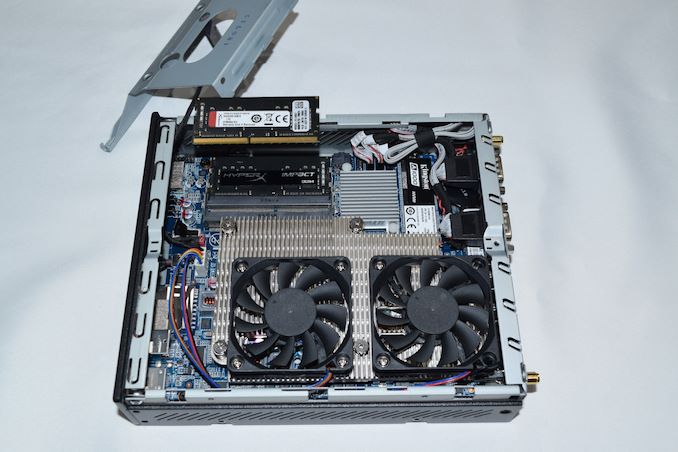 The specifications of our Shuttle XPC slim DH370 review configuration are summarized in the table below.

Similar to the other compact SFF systems, the DH370 is equipped with two DDR4 SO-DIMM slots (supporting DDR4-2400 / 2666 MHz memory kits). Since our review system was pre-configured, the package contents that we received and have pictured below might not exactly tally with the set of components received by retail customers. 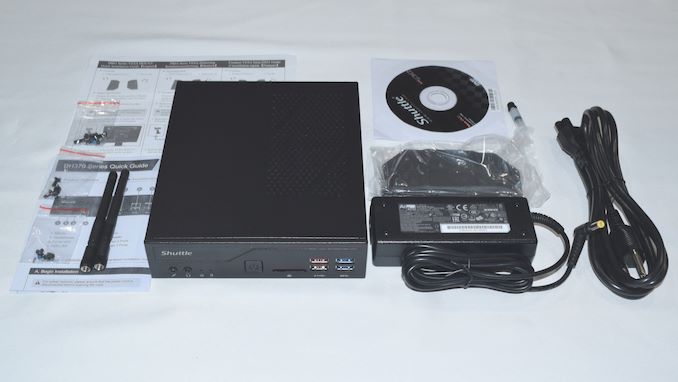 The package includes the drivers on a CD (a USB key, even read-only, is much more preferable), a quick installation guide, screws to install the storage drives, thermal paste, a 90W (19V @ 4.74A) adapter, and a geo-specific power cord. The antennae for the WLAN component and the PS02 stand kit for vertical installation were also part of the kit. The gallery below shows aspects of the chassis design as well as the internals of the system.

The Shuttle XPC slim DH370 runs the standard AMI BIOS, and the features are quite basic. There is no fancy GUI or extra features such as the ones we are accustomed to in the BIOS of systems from Intel, ASRock, Asus, GIGABYTE, and the like. The screenshots in the gallery below takes us through the available BIOS options.

The DH370, as the name itself indicates, uses the Intel H370 chipset. This brings all the platform updates that the 8th Gen. Core platform supports - the primary ones being the plethora of USB 3.1 Gen 2 ports directly from the chipset, and the CNVi integrated Wi-Fi capabilities. The DH370 makes maximum use of the new features, opting to bring out all four possible USB 3.1 Gen 2 hosts as Type-A ports (two in the front panel, and two in the rear). The board also integrates a M.2 2230 slot for the Wi-Fi WLAN adapter. The H370 chipset has 20 PCIe 3.0 lanes, of which four are used for the DMI link to the processor. The compact nature of the XPC slim DH370 doesn't allow for complete usage of the available HSIO (high-speed I/O) lanes. The AIDA64 system report provides a breakdown of the usage of the PCIe lanes:

In the table below, we have an overview of the various systems that we are comparing the Shuttle XPC slim DH370 against. Note that they may not belong to the same market segment. The relevant configuration details of the machines are provided so that readers have an understanding of why some benchmark numbers are skewed for or against the Shuttle XPC slim DH370 when we come to those sections.

The XPC slim DH370 stands out from the run-of-the-mill Coffee Lake desktops due to its ability to drive three separate 4Kp60 displays (1x HDMI 2.0a + 2x DisplayPort 1.2) using the integrated GPU in the installed CFL-S processor. The ability to support this feature without compromising on the form-factor is worthy of deeper analysis. We will be doing that further down in this review, in addition to the analysis of our usual benchmarks for SFF systems.