Going through the different vendor's product stacks alphabetically, our first TRX4 model comes via the ASRock TRX40 Creator. As the name might suggest, the ASRock TRX40 Creator is focused at content creators and professional users looking to use features such as Aquantia AQC107 10 GbE, Intel's AX200 Wi-Fi 6 wireless interface. Also featured are support for up to DDR4-4666 with up to 256 GB across eight slots, a USB 3.2 G2 20 Gbps Type-C port on the rear panel, and three PCIe 4.0 x4 M.2 slots. 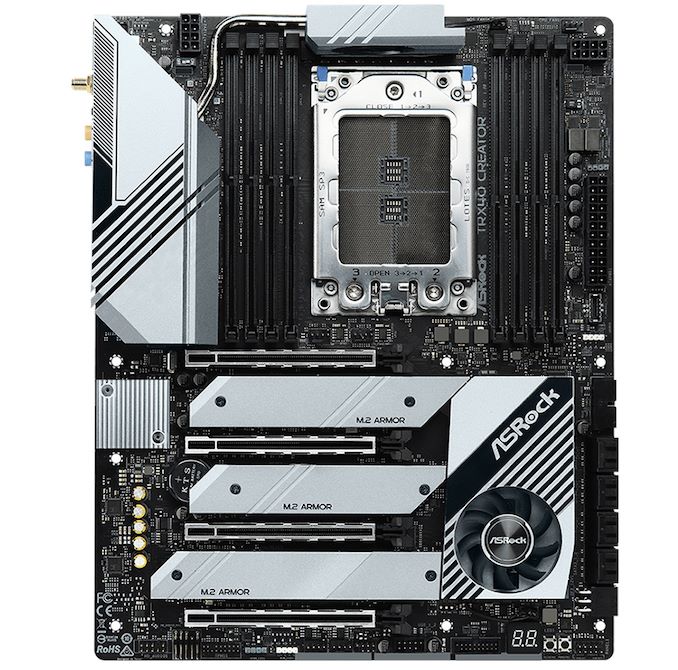 The ASRock TRX40 Creator is an ATX sized model which combines a very sleek and simple aesthetic with its silver aluminium heatsinks and black PCB. Keeping the TRX40 chipset cool is an actively cooled heatsink, while the rear panel cover doubles up as the power delivery heatsink. Touching on the power delivery itself, the ASRock TRX40 Creator is using an 8-phase design which is controlled by an ISL66247 8-phase controller, with eight ISL99390 90 A power stages. Providing power to the CPU is a pair of 8-pin 12 V ATX power connectors which are located along the top left and right of the board. There are four full-length PCIe 4.0 slots which operate at x16/x8/x16+x8, with three PCIe 4.0 x4 M.2 slots which each includes an M.2 heatsink. For SATA devices, there are eight SATA ports which support RAID 0, 1, and 10 arrays.

Located around the edge of the board are five 4-pin headers which are split into one for a CPU, one for a water pump, and three for chassis fans. In the bottom right-hand corner is a two-digit LED debug, with a small power and reset switch. For users looking to go extreme, ASRock has also included a CPU Xtreme OC switch, although the more enthusiast of users might opt for ASRock's TRX40 Taichi. Memory compatibility looks strong with support for up to DDR4-4666, with scope to install up to 256 GB across eight memory slots.

The rear panel has just two USB 3.1 G2 Type-A ports, with four USB 3.1 G1 Type-A and a single USB 3.2 G2 Type-C with support for up to 20 Gbps. Networking on the ASRock TRX40 Creator is impressive with dual Ethernet consisting of an Aquantia AQC107 10 GbE and Realtek RTL8125-AG 2.5 GbE pairing, and an Intel AX200 Wi-Fi 6 wireless interface. Also present is a BIOS Flashback button, a clear CMOS switch, and a PS/2 combo port. The five 3.5 mm colour-coded audio jacks and S/PDIF optical output are powered by a Realtek ALC4050H and ALC1220 pair of audio codecs, while a Texas Instruments NE5532 headset amplifier is present to bolster the quality of the front panel audio connector.

The ASRock TRX40 Creator as the naming structure would suggest is pitched to content creators and professionals with its well-rounded networking controller set, support for up to three PCIe 4.0 x4 M.2 slots, and subtle and neutral aesthetics. Unlike other ASRock models of late, its decision not to include Thunderbolt 3 may be a disappointment to some, but they have integrated a USB 3.2 G2 Type-C port with half the available bandwidth (20 Gbps) on the rear panel. Another thing that should be rectified is the naming scheme, as both ASRock and MSI have a TRX40 Creator model in its line up; more should be done to create better brand awareness and not to confuse users. The ASRock TRX40 Creator will launch with an MSRP of $449.