With ASRock announcing just two new models for the launch of the AMD Ryzen Threadripper 3970X and 3960X launch, it is no surprise to see one of its most predominant series hit the TRX40 chipset. The ASRock TRX40 Taichi takes its usual unique approach to aesthetics with its cogwheel inspired branding, and even adds integrated RGBs to further adds to its appeal. The most notable features include support for DDR4-4666 memory, a 16-phase power delivery for the CPU, and a Realtek 2.5 GbE controller. 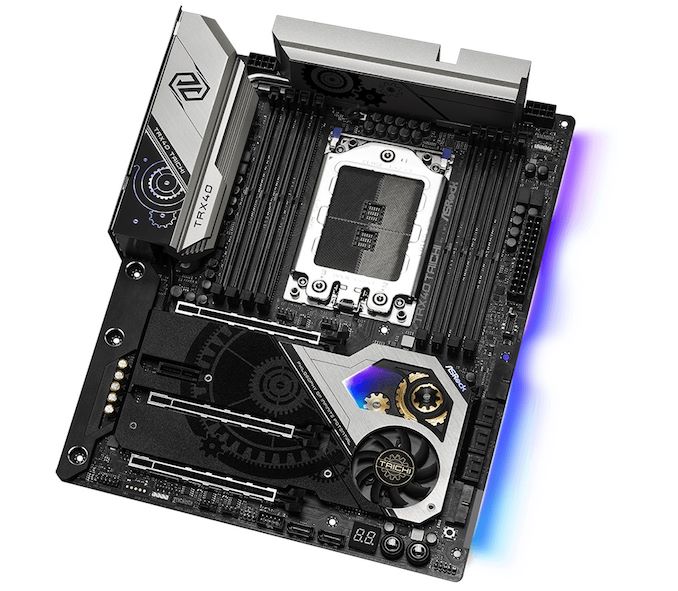 The ATX sized ASRock TRX40 Taichi continues the unique lineage of models with a recognisable aesthetic with cogwheels implemented into the design, as well as integrated RGB LEDs into the chipset heatsink and the right-hand side of the board. Underneath the large aluminium heatsink is a 16-phase power delivery with 16 ISL99390 90 A power stages and is controlled by an ISL69247 controller running at 8+0. There are three full-length PCIe 4.0 x16 slots, with a single PCIe 4.0 x1 slot in the middle, which are surrounded by a black Taichi designed armor shielding around the PCIe slot area. For storage, there are two PCIe 4.0 x4 M.2 slots onboard with heatsinks integrated into the armor, and a total of eight SATA ports which support RAID 0, 1, and 10 arrays. Two of the SATA ports are straight angled and are located right next to the two-digit LED debug, power button, and reset switch.

Users looking to expand on the two PCIe 4.0 x4 M.2 slots will appreciate the Hyper Quad M.2 card in the accessories bundle which allows users to install a further four PCIe 4.0 x4 M.2 slots into one of the full-length PCIe 4.0 x16 slots. The ASRock TRX40 also has eight memory slots which support up to DDR4-4666 and 256 GB of memory. As with all launch day TRX40 models, the chipset heatsink has a cooling fan which is open and not covered by a grill, while there are five 4-pin headers with one for a CPU fan, one for a water pump, and three for chassis fans.

On the rear panel is two USB 3.1 G2 Type-A, four USB 3.1 G1 Type-A, and one USB 3.2 G2 Type-C 20 Gbps port, with a BIOS flashback button and PS/2 combo port. The five 3.5 mm audio jacks and S/PDIF are handled by a Realtek ALC1220 and ALC4050H audio codec combination, while the two Ethernet ports are powered by a Realtek RTL8125-AG 2.5 GbE and Intel I211-AT Gigabit controller. The board also includes an Intel AX200 Wi-Fi 6 wireless interface which also adds BT 5.0 connectivity.

The ASRock TRX40 Taichi is the premier board for enthusiasts in its line-up with each of the four full-length PCIe 4.0 slots supporting x16 across the board, which allows for a powerful gaming system, solid workstation, or for other tasks such as content creation. The ASRock TRX40 Taichi has an MSRP of $499 which represents good value for money based on the features and leaves the door open for an even more premium flagship further down the line.