The MSI Creator TRX40 Motherboard Review: The $700 Flagship for Threadripper

The TRX40 chipset is designed to support all the current generation AMD Ryzen Threadripper processors including the 3990X which has 64-cores and 128-threads of processing power. On the test bench today is the MSI Creator TRX40 which is its current top-tier offering with a high-end feature set including four full-length PCIe 4.0 slots and supports up to three PCIe 4.0 x4 M.2 drives. With a feature set led by an Aquantia AQC107 10 gigabit Ethernet controller, and an Intel AX200 Wi-Fi 6 wireless adapter, MSI opts for a more content creator and professional theme for its flagship. 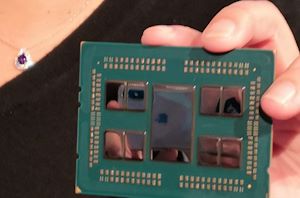 In what is being put down to an inadvertent leak by MSI, it could be that the currently unannounced chipset for AMD's new 3rd Gen Ryzen Threadripper series processors...