It probably goes without saying that battery life is a critical aspect of a mobile device. After all, something that spends a significant amount of time tied to an AC adapter for power isn’t very mobile at all. In order to properly test battery life, we use our standard battery life test suite, which covers a range of display-on scenarios from mostly display-bound light web browsing to aggressive processor and graphics workloads that can be found in 3D games and Lollipop local app compilation. This allows us to see the power consumption of various components within the system, and in the case of the more extreme tests we can also see what sustained performance is like for various aspects of the system.

However, before we get to the battery life results I want to talk a bit about display power, which is a bit of a perennial question in our battery life tests. While you can roughly separate out display power in battery life tests the data often isn’t present to say whether one type of display is more efficient than another. Ideally, we would disassemble devices and wire up a power monitor to the battery terminals, but with review units supplied from the manufacturer, this is often a non-starter with the T&C of their sampling program. Therefore, for this test we decided to test for display power by measuring power consumption using the internal fuel gauge. This allows us to get some kind of number for power measurement, but it’s important to emphasize that this is just a way of getting a measurement that’s more precise than plugging the phone into an AC adapter and trying to guess true power consumption based upon AC adapter power draw. 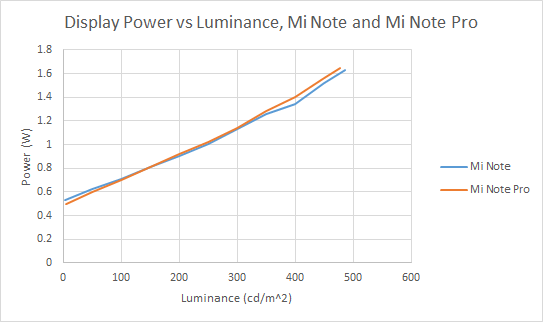 In the case of the Mi Note and Mi Note Pro, we’re faced with an interesting situation because the only real difference between the two devices in terms of power is that one uses a Snapdragon 801 with a 1080p display and 3GB of LPDDR3, while the other has a Snapdragon 810 with a 1440p display and 4GB LPDDR4. In a purely idle display situation, the Mi Note Pro and Mi Note look to be almost identical in terms of power consumption. I’m not sure how Xiaomi accomplished this, but the result is impressive to say the least. 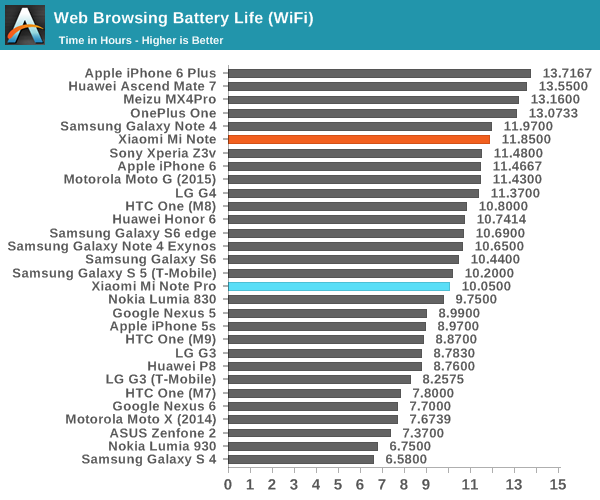 Moving past our display power testing, the web browsing test is the lightest test in our suite that includes both RF power and some CPU workload. Here, we see some pretty interesting result. Assuming both devices have nominal battery capacity the Mi Note averages around 1W in this test. The Mi Note Pro averages about 1.2W, or roughly 200 mW higher throughout the test. Both displays are in a command mode to enable panel self-refresh and power appears to be roughly equivalent. While the M9 had a number of confounding factors, with the Mi Note Pro it is increasingly evident that the Snapdragon 810 causes a noticeable regression in battery life, even in very light CPU workloads where the work done per time is identical. At any rate, both perform respectably in this test, even if the Mi Note Pro does fall a bit short relative to other phablets. 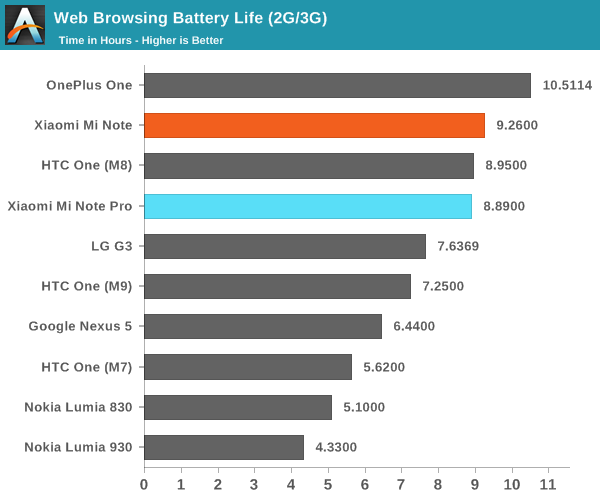 Unfortunately, with the Mi Note devices we don’t have the ability to do our standard LTE comparisons, but I’ve run the same test on AT&T’s WCDMA network which should provide a decent modem comparison as well. Interestingly, here it seems pretty clear that the gap that appears in WiFi browsing almost disappears when running on HSPA+. Given that 3G strongly stresses modem performance, it does appear that the modem in the Snapdragon 810 brings power efficiency improvements over previous generations. However, it looks like it isn't quite enough to completely compensate for the difference in CPU efficiency. 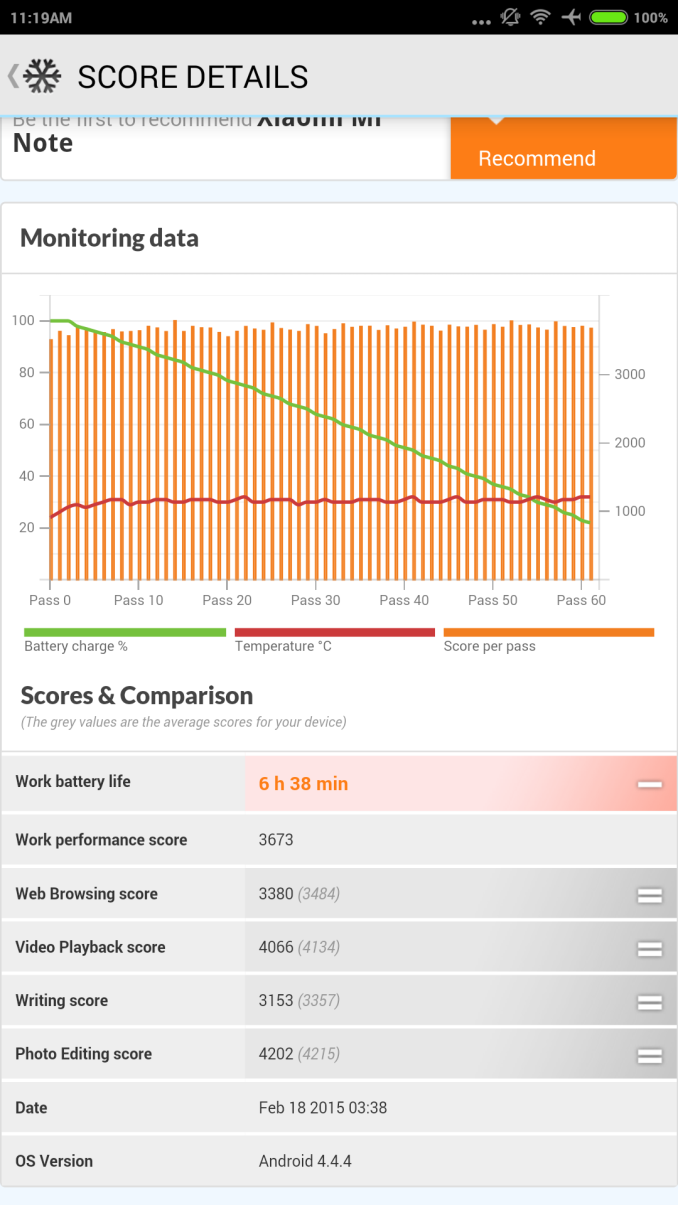 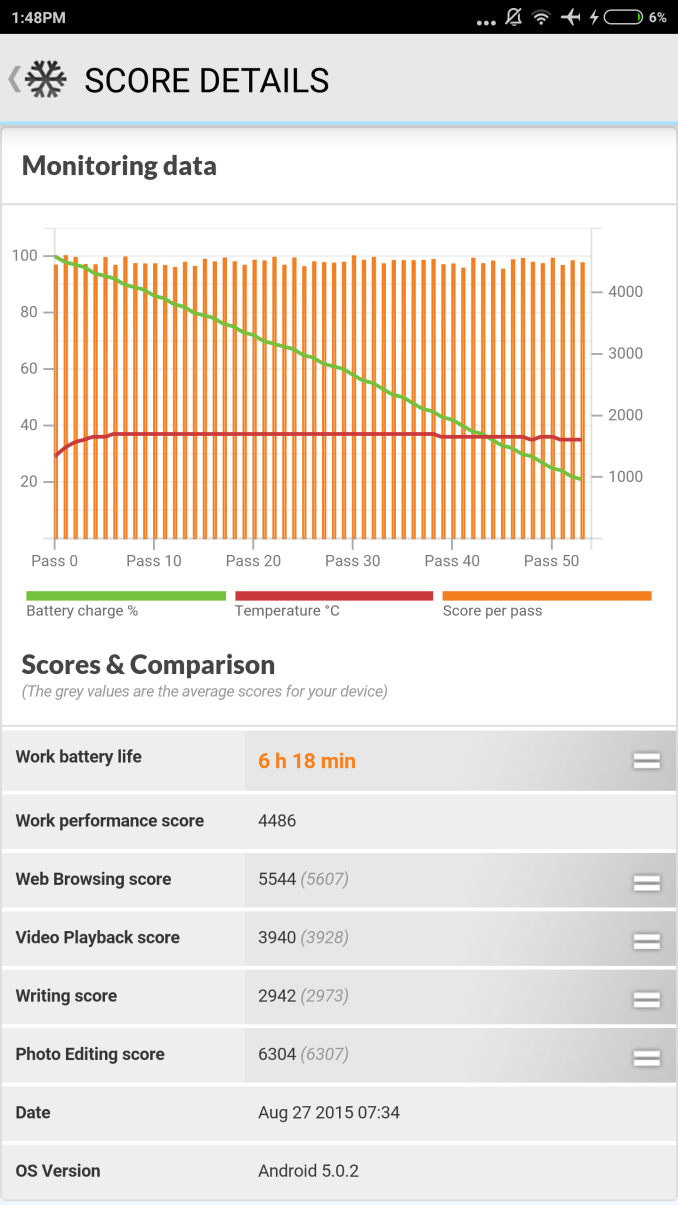 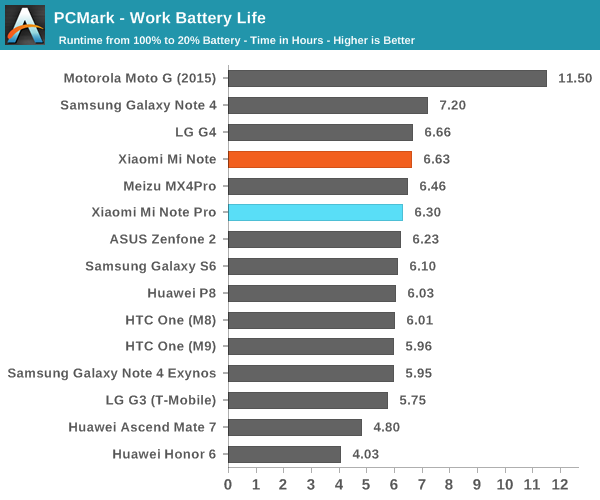 Moving on to PCMark, our balanced CPU/display battery life test, we see some interesting results as well.  If we look purely at power, one would probably assume that the Snapdragon 810 is losing here, but once you consider average performance throughout the test, the Mi Note appears to do worse overall. However, due to Xiaomi’s rather conservative governor on the Mi Note and the different Android versions it’s hard to draw any conclusions from this test as PCMark results are strongly dependent upon Android version. The one device that we have on-hand with Snapdragon 805/801 and Lollipop 5.x is the Galaxy Note 4, which clearly exceeds the Mi Note Pro in both performance and runtime even after compensating for the difference in battery size. I didn't realize this until writing up the review, but PCMark is probably the best demonstration of the battery life improvements that come with Lollipop and ART as this is one of our benchmarks that strongly depends upon VM performance. 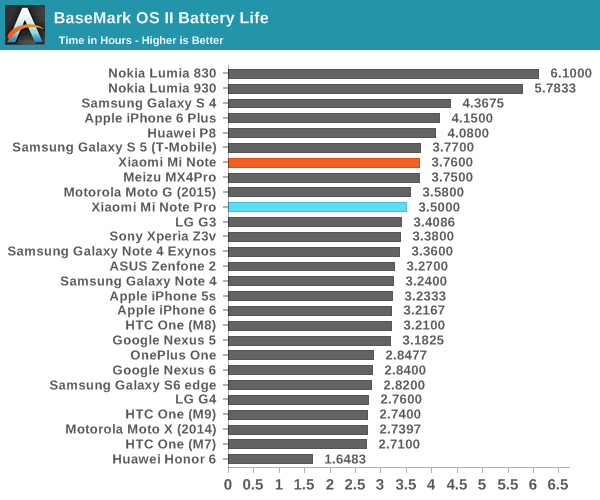 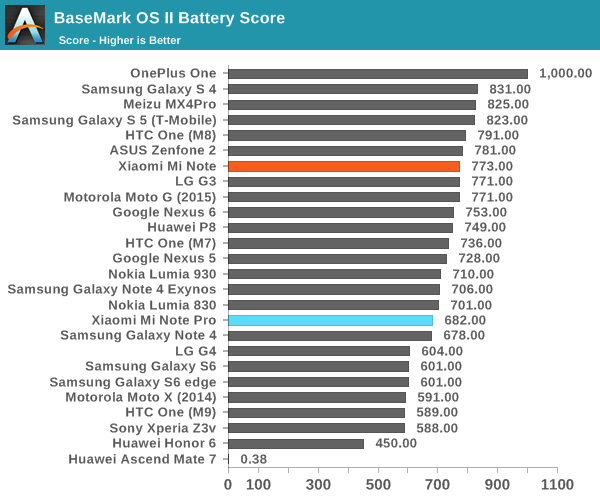 At the more extreme end of the segment, Basemark OS II is a test designed to really place significant pressure on the CPU. In this test, we once again see that the Mi Note lasts significantly longer than the Mi Note Pro. If you’re like me, you would probably assume that the Mi Note does so because it doesn’t deliver as much performance, but looking at the battery score shows that the Mi Note Pro consistently sustains higher load over the duration of the test. Xiaomi has done a great job of keeping thermals under control with the Mi Note Pro, but despite this it’s clear that the SoC is just consuming a lot of power here. 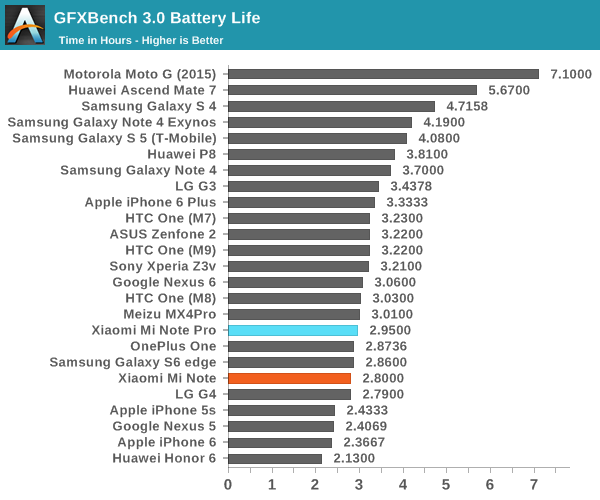 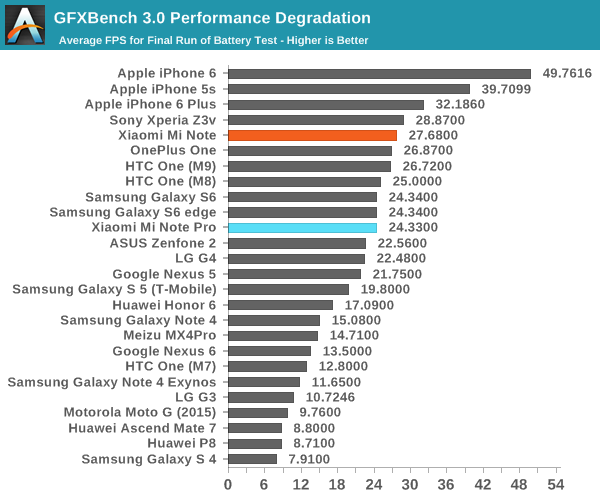 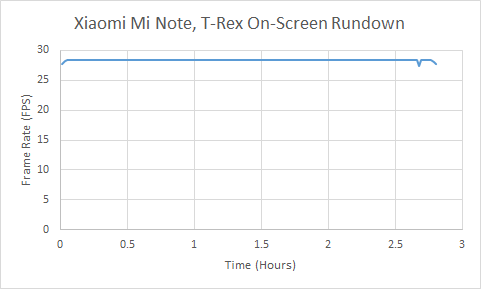 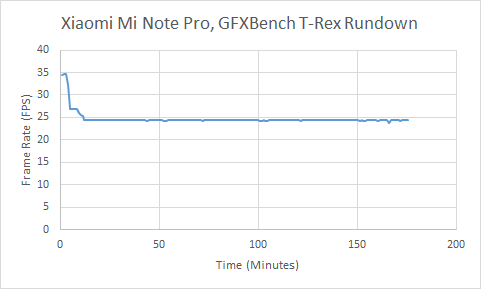 Overall, the battery life of the Mi Note is acceptable and comparable to most phablets on the market, while the Mi Note Pro falls slightly under par. I doubt most users will really notice a big difference here, but both devices should get most people through a full day of use without any kind of range anxiety. Given that the SoC is basically the single biggest difference between the two devices when it comes to power consumption, it’s definitely concerning how the Mi Note Pro appears to regress relative to the Mi Note in any kind of CPU-bound workload when the Snapdragon 810 is fabricated on a more advanced 20nm process.

Battery life is usually the primary way by which mobility is determined, but in a number of scenarios charge time becomes critical. The usual cases where this might happen include forgetting to plug in your phone before going to bed and long distance flights. I’m sure there are a number of people out there that will point to most of these cases as a good reason for removable batteries, but based on discussions with OEMs it’s clear that most people don’t carry a second battery around on a regular basis. As a result, the speed with which a smartphone can charge is relevant in these scenarios. In the case of the Mi Note, the charger is limited to a rather standard 5V, but the Mi Note Pro supports QC 2.0 fast charging at 9V. The included charger is limited to 1.3A though, so much of the charge speed improvements will come from less power loss over the charger cable rather than higher wattage. In order to test charge time, we measure the time it takes for a phone to charge with its included charger until the phone indicates 100% either through an LED or by measuring power draw at the wall. 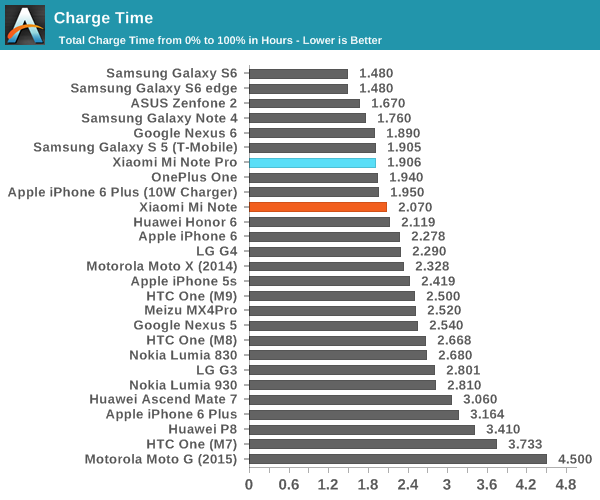 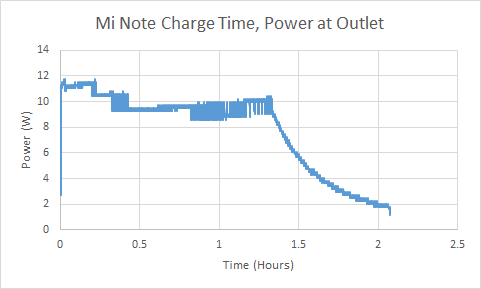 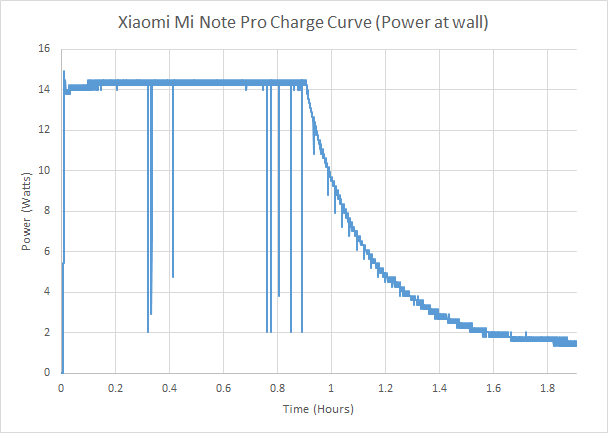 As we can see, the benefit of fast-charging with the Mi Note Pro’s included charger is relatively small but definitely noticeable. It actually ends up about as fast as the OnePlus One with a 5V, 2.1A charger which suggests that this move was mostly done in order to improve energy efficiency and mildly improve charge rate while balancing battery longevity. It's worth noting that even though the Mi Note Pro has the same charge time under our testing, looking at the graph it's clear that the Mi Note Pro will charge faster in the linear region before slowing down to achieve the previously mentioned improved battery longevity.

The Mi Note performs as one would expect from a standard 5V charger, and doesn't support fast charge judging by its behavior on the charger. Overall, both phablets do about as well as one would expect here. Looking at the mobility equation holistically, the Mi Note is better than the Mi Note Pro, and as a result the conclusions for both are noticeably different. I would say that the Mi Note is on par with other phablets launched today, but the Mi Note Pro is below average due to the Snapdragon 810 in this device, v2.1 or not. It's unfortunate that this is the case, but I suspect Xiaomi has been backed into a corner when it comes to SoC choice here.