The second set of keyboards that we look at today comes from the German manufacturer, Perixx. Their PERIBOARD line of keyboards target most of the market niches in the category - from mechanical gaming keyboards with Cherry MX switches to Bluetooth keyboards for mobile devices. Their play in the HTPC area comprises of wireless keyboards with either integrated touchpads or trackballs, with a focus on being easy on the wallet. However, does that translate to units that are cheap in quality? That is what we aim to find out with our review samples of the PERIBOARD-716 wireless touchpad keyboard and the PERIBOARD-706 PLUS wireless trackball mini-keyboard. 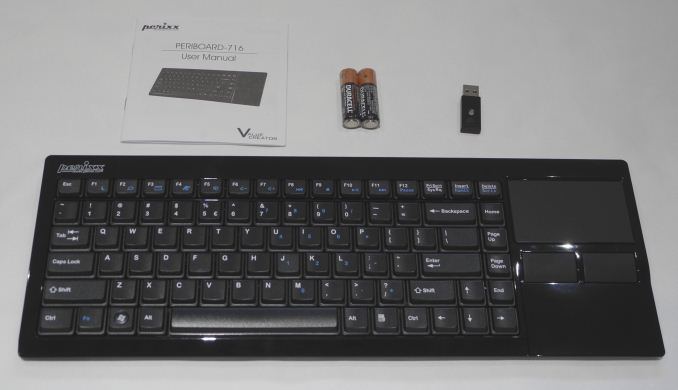 The external aspects of the Perixx PERIBOARD-716 are summarized in the table below. The placement of the 2-button touchpad is quite different from what we have seen in other similar units. Usually, it is aligned vertically in the middle on the right side, with a few multimedia buttons on top. However, the PERIBOARD-716 aligns it vertically on top, as shown above. This allows for a hand-rest below the touchpad buttons. The dimensions are closer to that of a full-sized keyboard compared to the Logitech K400. The weight of the unit ensures that it doesn't feel flimsy during use or while carrying around. The touchpad area is a bit small given the overall size of the unit.

The gallery below takes the reader around the various features in the keyboard chassis. There is an explicit on/off switch to conserve power.

The keyboard layout is aided by the extra width available (compared to other units targeting this market). The availability of full-sized arrow keys as well as explicit Home / Pg Dn / Pg Up / End buttons is definitely appreciated. There is a blue 'Fn' key mode, but Perixx has the good sense to keep the default behavior consistent with the traditional functions of the various keys. The spacing of the keys in the keyboard as well as the almost-standard layout make it suitable for extended typing tasks. We dock off some points for the keyboard layout just because of the non-standard column of keys to the right of the 'Return' key and the number pad multiplexed with Fn - Num Lock. The latter aspect is particularly troublesome for systems that boot up with Num Lock enabled in the BIOS.

Moving on to the ergonomics, the keyboard does not have an adjustable angle. However, it is not entirely flat, either. The natural angle does make it suitable for usage on a desk, when necessary. In terms of usage in a HTPC scenario, the absence of a dedicated left click button on the left side of the keyboard is a bit unfortunate (but definitely not as issue for single-handed usage). However, our main complaint against the unit in terms of ergonomics is also a case against the build quality - the sharpe edges of the unit slightly beneath the matte edge (particularly in the corners) resulted in multiple scratches on my hand as I moved them to access the touchpad buttons or one of the keys.

The unit used to be available for $25 on Newegg for quite some time in the USA. Currently, it seems to be available in Amazon UK for £15. At this price point, it is no surprise that the build quality is not very good. The power on/off toggle switch is rigid and the plastic feels really cheap.

The PERIBOARDs carry only a one year warranty, but, given the price point, users might not be too concerned. On the whole, it is a good choice for use with SBCs (single board computers) like the Raspberry Pi and the multitude of Android mini-PCs. Even though the keyboard layout looks great for extended typing duties, we fear the construction and build quality make it suitable only for light use. As a keyboard / mouse replacement for HTPCs in the living room, it should be right at home. 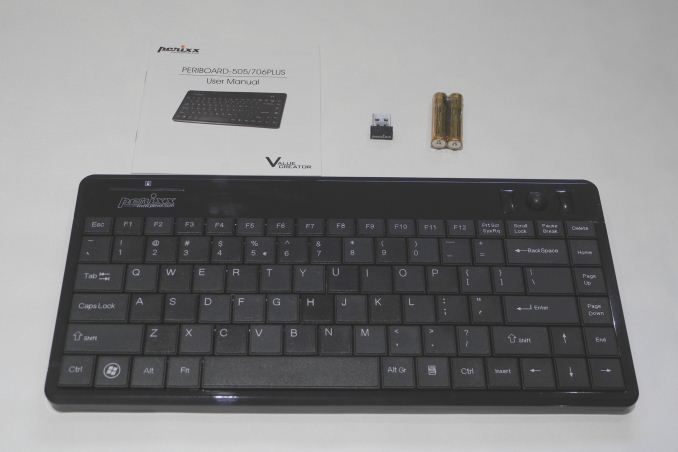 The external aspects of the Perixx PERIBOARD-706 PLUS are summarized in the table below. Unlike the other trackball-based keyboards we have evaluated (such as those from IOGEAR, Adesso and SIIG), this model places the mouse buttons on either side of the trackball. Usually, such a design is adopted if the trackball is placed under the keys and aligned similar to the touchpad location in notebooks. Utilizing this configuration with the trackball to the top-right takes some adjustment from the user's perspective. The absence of a touchpad allows for a width of just 12.4", befitting the 'mini' in the device name without sacrificing on the size of the keys themselves.

Similar to the PERIBOARD 716, the 706 PLUS also carries an explicit on/off switch for power conservation. The gallery below takes us around the unit.

The key sizes as well as the lettering are big, particularly for a keyboard of this size. The layout is very similar to that of the PERIBOARD 716. Despite the almost-standard layout, two aspects made us dock some points - the extra column of keys to the right of the 'Return' key and the presence of the 'Ins' key in the location where we usually have a 'Ctrl' key. The placement of the 'Shift' key under the 'Return' key is also slightly off from the usual. On the positive side, we have full-sized arrow keys and no Num Lock issues (thanks to the absence of the number pad functionality).

In terms of ergonomics, the lack of tilt rules out the device for extended typing scenarios. Similar to all trackball keyboards without a left click button on the opposite end, drag-and-drop operations are a big pain. Absence of a scroll button makes certain operations more difficult than they should be. In general, mini-sized keyboards are not that great from an ergonomics viewpoint, but the 706 PLUS is better than most others in that class.

The PERIBOARD-706 PLUS is available on both Amazon and Newegg currently for $15. At this price point, most issues can be ignored. It is also not a big surprise that the construction and build quality is average (but, not bad). The main issue is the cheap appearance and feel of the trackball as well as its inconsistency during use. However, many trackball keyboards suffer from similar issues. On the positive side, the overall quality was a bit better compared to the PERIBOARD-716.

The trackball adopts aggressive power saving measures, causing the system to turn off after a short duration of inactivity (not user-configurable). We saw similar issues with other HTPC keyboards also. The nett effect is that the keyboard appears unresponsive when trying to just move the mouse cursor. Pressing one of the keys or the mouse buttons reactivates the trackball.

Considering the layout and ergonomics, it is clear that the PERIBOARD-706 PLUS is not suitable for extended typing duties. However, for users who prefer a trackball keyboard for occassional use in HTPC scenarios, the unit presents a compelling case with its price point.