One of the more interesting and not immediately obvious set of improvements to the MacBook come in the form of new internal mechanisms for the keyboard and trackpad. Though both look the same – and largely behave the same – as Apple’s existing products, under the hood they’ve been doing some work to improve these input devices. The driving factor of course is to further reduce the amount of Z-height these two devices take up, but there’s also a secondary focus on improving their functionality overall.

Starting with the keyboard, on the surface the MacBook implements a keyboard very similar to the now-traditional MacBook Air keyboard, incorporating a few smaller changes since their last design. Still a “full size” 78 key design that includes a top row of short function keys, Apple has made some changes to the keys themselves. Of note, the “inverted T” design of the arrow keys has been removed in favor of full size left and right arrow keys, giving the MacBook a somewhat odd arrangement where left/right are larger than up/down, rather than being identical in size as before. In Apple’s older design the space above left/right is empty space, so nothing is being sacrificed for this, but touch typists accustomed to the short arrow keys are going to have to do some adapting. Meanwhile at the other corner the escape key has been slightly elongated so that it’s wider than a normal key, and the other function keys have each been slightly narrowed to compensate.

Apple has also changed the overall size of the other keys, though even regular Mac users may have trouble picking up on this. The keys are now 17% larger, with Apple having slightly reduced the amount of space between each key to compensate. Meanwhile the keys are also have a deeper curve, which Apple tells us is 50% deeper. Truth be told, if not for the fact that Apple took the time to point this out in their reviewer’s guide I likely would not have picked up on either of these changes; the wider keys are noticeable once you know what to look for, but only just. Ultimately I don’t find the MacBook’s keyboard to be any different to type on as far as key size and feel goes (even with my large fingers), but your mileage may vary.

Last but certainly not least however is the new key mechanism used underneath key, with like a number of other technologies is being first introduced on the MacBook. Apple has forgone the traditional scissor switch in favor of a newly designed mechanism they’re calling the butterfly switch, which in the slow-moving world of keyboards is the first significant change in quite some time. 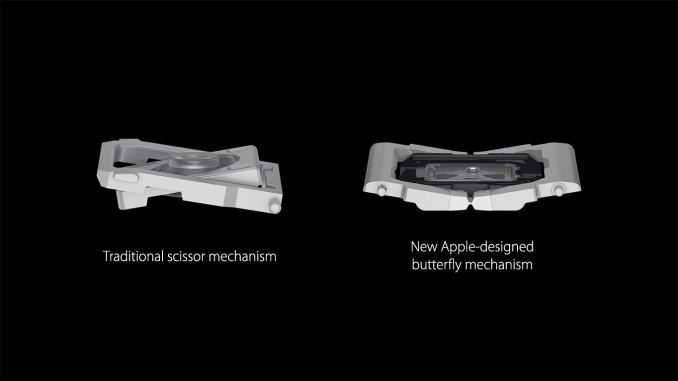 The purpose of the butterfly switch is two-fold. The first of course is to reduce the size of the switch, allowing Apple to make the keyboard and resulting laptop thinner. Officially the butterfly switch is 40% thinner than Apple’s traditional scissor mechanism. That said, I’m not entirely convinced that Apple needed to switch mechanisms to reduce the keyboard thickness (though perhaps not getting 40% thinner), as we’ve seen other keyboards such as the Surface Pro 3’s type cover use some very thin scissor switches. Instead I suspect Apple’s change was focused on key stability as well.

Along with allowing for thinner keys, the other major improvement in the butterfly switch is key stability. By making the butterfly mechanism symmetrical Apple has done away with the scissor switch’s corner instability, which if pressed at a far corner would allow the scissor mechanism to actuate without actually triggering the switch. With the butterfly switch essentially composed of two identical halves that each prop up their respective corners, the instability has been eliminated as all four corners are similarly supported.

The end result, as Apple likes to pitch it, is that butterfly-backed keys are more stable and have the same feel to them no matter where on the key you press. And true to their word, in my experience this is exactly the case. The MacBook’s keys feel the same no matter where you press, and more importantly we haven’t encountered any failed keypresses in our formal or informal keyboard testing. Having used a number of scissor keyboards over the years, including a couple that suffered from non-registering corner keypresses, this is a welcome change as it’s seemingly impossible to have a key fail to register. That said the quality of scissor mechanisms definitely varies on a vendor-by-vendor basis, and with Apple’s scissor mechanism already performing well, I’m not sure if this is really all that big of a step up from other Apple designs. On the other hand what I’ve also found is that the instability problems of scissor keyboards seem to get worse as they get thinner, so it’s quite likely that Apple needed to make this change as they wouldn’t have been able to maintain their high keyboard quality with an even thinner scissor switch keyboard. 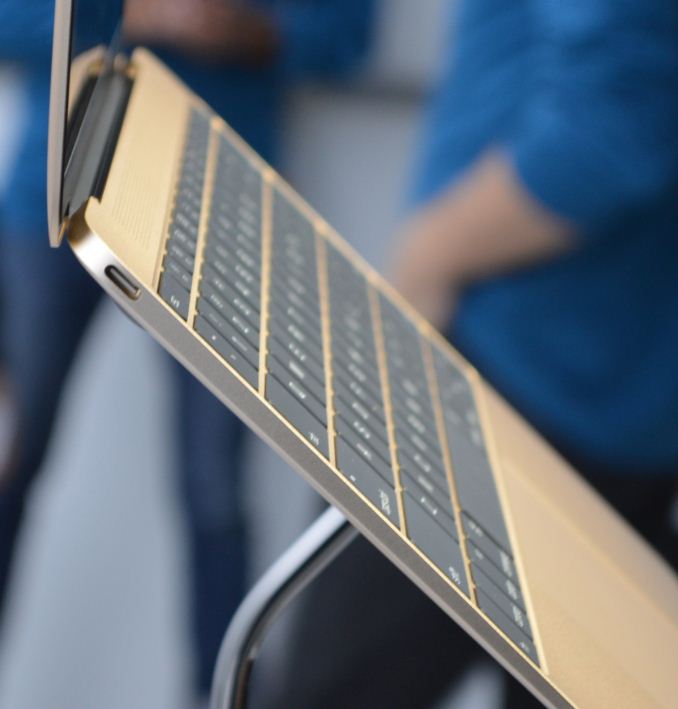 In any case, the other big change to keyboard feel is that due to the thinner switches, the total amount of key travel is significantly reduced. While the MBA and other Ultrabooks already had fairly low key travel, the MacBook’s keyboard reduces it yet again, and coupled with the changes in switches it makes the MacBook keyboard feel very different at times, and this is a difference that can take some getting used to at first. As thin as the switches are they’re closer to buttons than traveling keys – think iOS device home button – so typists accustomed to more travel and spring in their keys will immediately pick up on the difference, and I would wager take a temporary hit in words per minute (WPM) until they’ve fully adapted. After having used the MacBook for a week I can already type on it as well as I can my MacBook Pro, so it’s a relatively short adjustment period, but it’s there.

For a device of its size, overall I’d consider the MacBook’s keyboard to be an improvement over similar designs. That said, while I wouldn’t be surprised to see the backlighting improvements and key size changes eventually brought over to other MacBook designs, I don’t imagine we’ll be seeing the butterfly switch used on other, larger designs where Apple doesn’t need to be so conservative on space. As well as it works here, Apple doesn’t have the same need to deviate from the greater travel of scissor switches in their larger laptops.