Battery life ends up being one of the highlights of the Chromebook experience, as the lightweight OS does well in both our Internet test along with our heavier 720p H.264 video looping test. If you’re looking for an inexpensive laptop that can go all day without plugging in, the Chromebook 13 is definitely an option. As with all of our battery life testing, we set the brightness of the display to ~200 nits and run until the device shuts off.

I do want to note before we get to the results that we are not using the same Internet test that we use on Windows laptops in our “Light” battery life test – that uses Internet Explorer for one, and it cycles through more complex web pages and tends to be a bit heavier in terms of processing requirements compared to our smartphone and tablet test, which is what we also run on Chromebooks. Our video test uses the same video (a 720p 4Mbit MP4 file) as our table video test, which is a lot lighter than our "Heavy" Windows laptop test where we’re loading web pages and downloading at 8Mbps in the background.

It might be interesting at some point to see how a modern Windows laptop manages with these same workloads, or to try replicating our heavier workloads on a Chromebook, but for now let’s just look at the results. 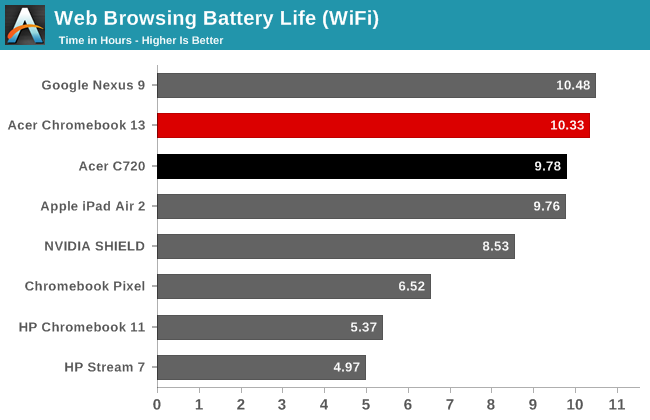 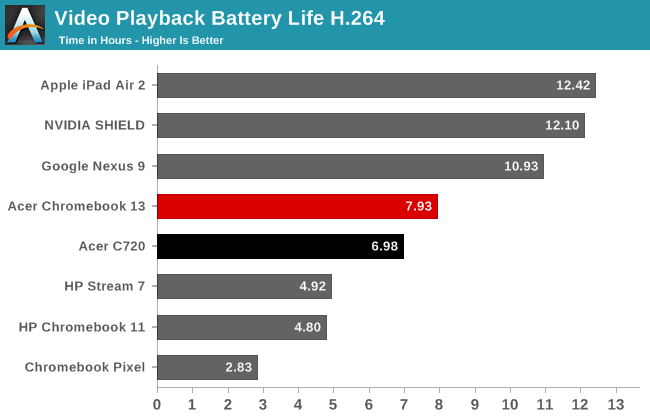 While performance was perhaps suspect with the Tegra K1 processor, where the Chromebook 13 really lets me down is in the LCD quality. I’m used to seeing a lot of poor quality 1366x768 TN panels in budget laptops, but when Acer chose to offer a 1080p display I hoped for something better. Unfortunately, the only upgraded aspect is the resolution, and the graininess and poor viewing angles at times make the display almost worse than a lower resolution panel. As you would expect, the color quality and accuracy also leave much to be desired. 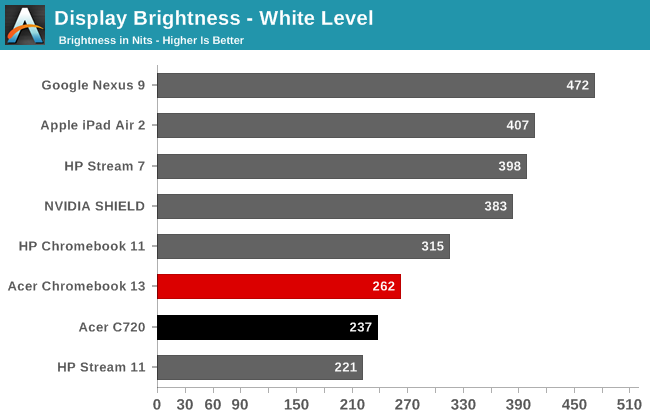 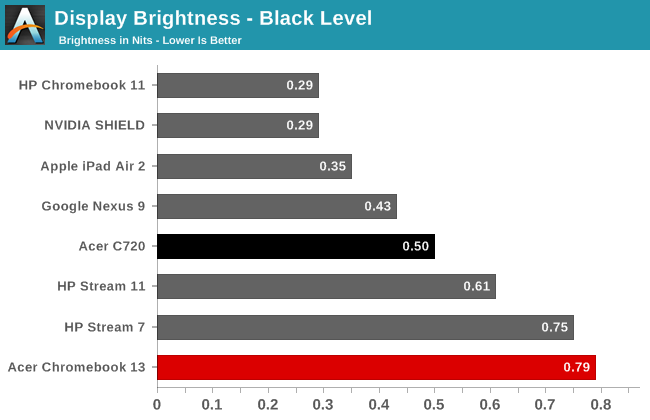 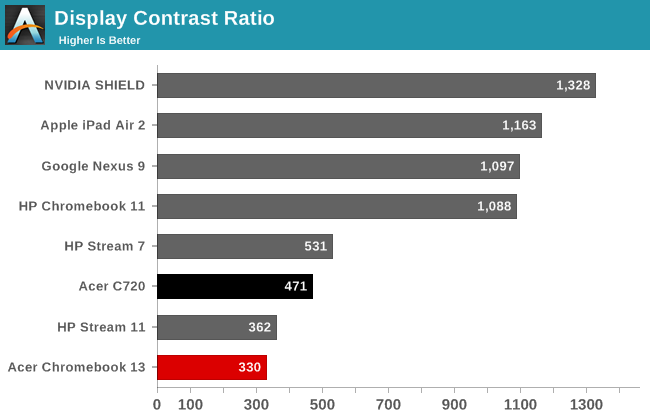 Right from the start we see problems with the display. The maximum white level of 262 nits isn’t horrible, but the corresponding black level of 0.79 nits is more of a dark grey than a black, and the resulting contrast is a rather poor 330:1 at best. And I say “at best” because at lower intensities the contrast drops further, e.g. when set for 200 nits we measured a black level of 0.67, giving us a 298:1 contrast ratio (and at 100 nits the contrast is only 65:1). 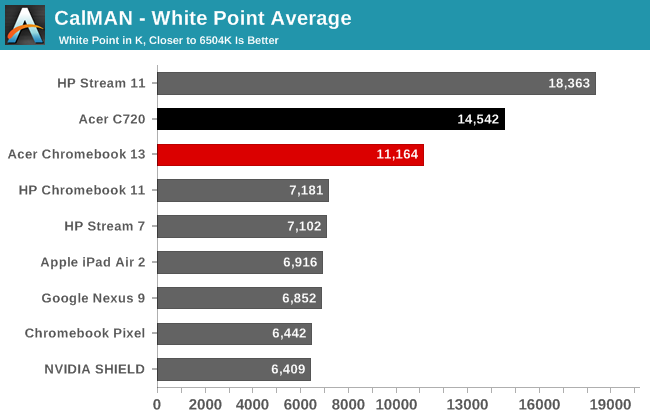 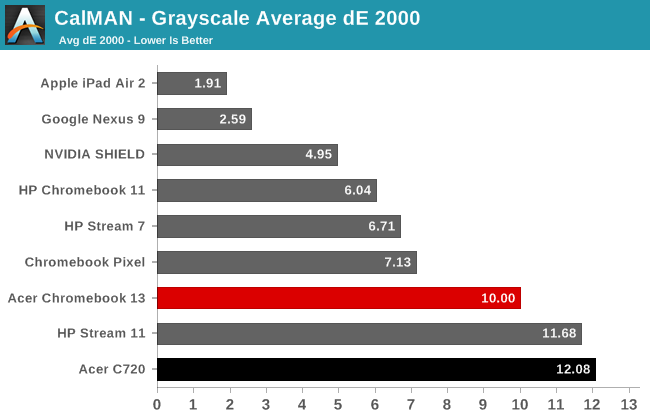 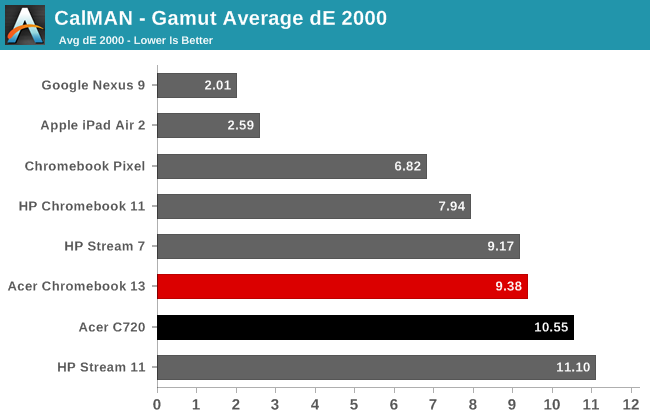 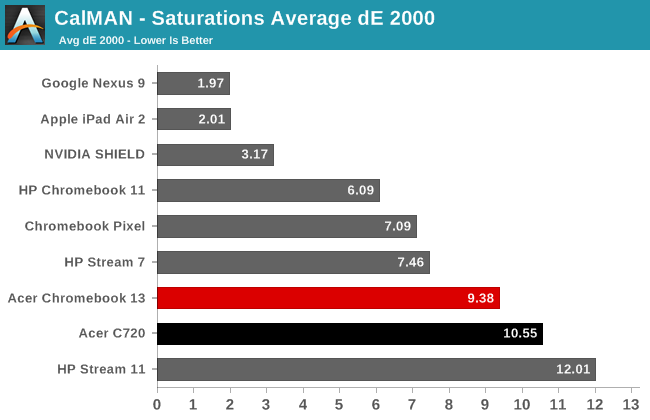 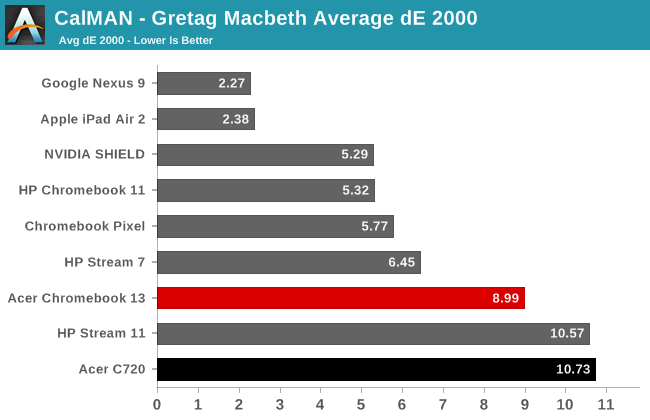 Things don’t improve as we move to other areas. The white point is crazy high at 11164K, though not at the level of the HP Stream 11 (thank goodness) and the result is that the screen – whites/greys in particular – has a clear “cool” blue tint. Delta E results across the whole set of tests are generally at or above 9.0 averages, which means the errors are very clearly visible to the naked eye. Here’s what the comparison charts look like for what you see vs. what you should see:

In this sense, it’s almost the reverse of the last Chromebook we reviewed, the HP CB11, where we found a good display (relatively speaking) but other areas needed work. The C720 display is another good point of comparison here: it has worse maximum brightness and colors are even less accurate, but the contrast ratio is slightly better at 471:1. As I said earlier, it’s like one step forward in resolution, but a step laterally or even backwards in other areas.

We can almost excuse the poor display as the Chromebook 13 is a budget laptop, and while there are plenty of Chromebooks around the $250 price point, the only current option that has a good display (other than the too-expensive Pixel) is Toshiba’s Chromebook 2 with a 1080p IPS panel. At $100 more for the Toshiba it’s unfortunately going to be a tough pill to swallow. Again, Acer seems to have learned a lesson here with upgraded displays as the forthcoming CB15 1080p uses an IPS panel. We should have both the Toshiba CB2 and the Acer CB15 in for testing shortly, so I can see how the two truly stack up in other areas, but for now if you like high quality displays just know that this particular 1080p panel falls well short of that mark. Not that my mom would likely notice the difference unless I pointed it out, of course….