Every year for the past three years, Samsung has flown a bunch of media from all around the world for their SSD Global Summit. The Summit serves as an opportunity for Samsung to release new SSDs as well as share their vision about the market trends and future products. This year the big news was obviously the release of the 850 Pro (our review), which is the first client SSD to utilize 3D NAND, but since we already reviewed the 850 Pro and covered V-NAND in detail, I will focus on the other highlights of the show here.

Alongside with the 850 Pro, Samsung is also releasing 845 DC Pro with first generation 24-layer V-NAND. The 845 DC Pro is Samsung's second "branded" enterprise SSD with the first one being the 845 DC EVO that was released about a month ago. Typically Samsung's enterprise SSDs have been OEM-only but with the DC series Samsung is offering their enterprise drives to smaller businesses as well.

With the DC EVO Samsung's goal was to provide an affordable solution to data centers with very read intensive workloads, which is why Samsung ended up using TLC NAND. Thanks to the faster and more durable V-NAND, the 845 DC Pro shifts the focus to write performance and endurance. Samsung is promising 50K IOPS in steady-state with 28% over-provisioning and ten drive writes per day, which means 7.3PB of writes for the 400GB model and 14.6PB for the 800GB model. The most interesting detail about the 845 DC Pro is its price as Samsung said it will be priced between $1.50/GB and $2/GB, making it a very competitive drive in the enterprise space. Generally drives with ten drive write per day have cost around $3 per GB (like the Intel DC P3700), so Samsung's move with the pricing is very aggressive. We are waiting for our review samples to arrive, so stay tuned for the full review! 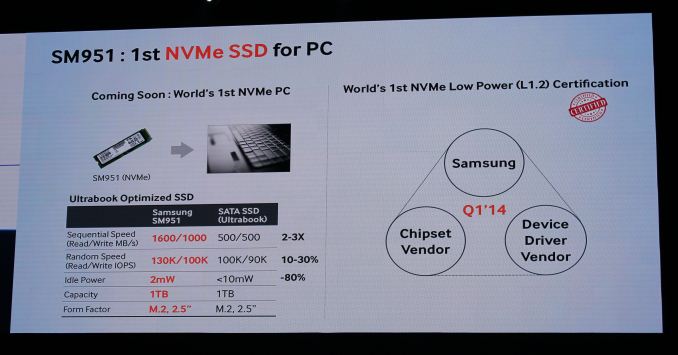 The other intriguing announcement Samsung made is the SM951. This is the successor of the XP941 we reviewed earlier and the biggest change is the switch to PCIe 3.0 x4 interface and support for NVMe (for more information about NVMe, read our Intel DC P3700 review). Similar to the XP941, the SM951 is unfortunately an OEM-only product but it is possible that third party resellers will carry the drive like what happened with the XP941. I was told that the SM951 is already shipping to OEMs but currently there are no products out in the market with the drive inside. We are currently in talks with Samsung to get a review sample but Samsung's OEM branch has always been a bit difficult to deal with when it comes to samples, so let's hope for the best. 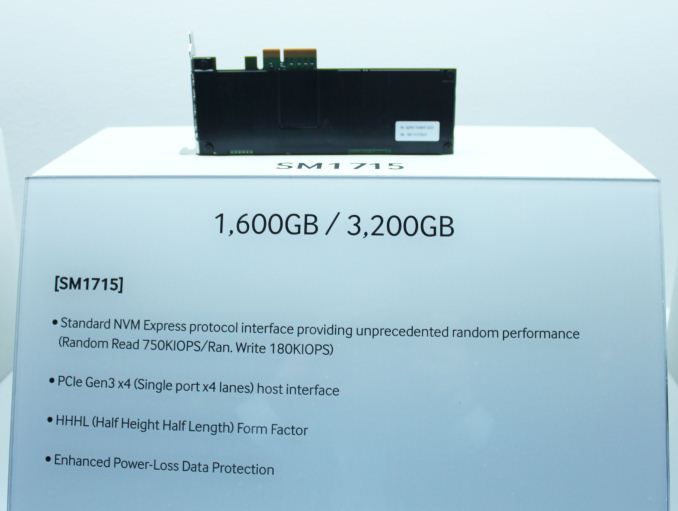 Samsung also had the SM1715/XS1715 (or The Unicorn) in the showroom. It is an OEM-only enterprise SSD with NVMe support but from what I can say, the drive is a ghost. I have not seen the drive out in the wild, even though Samsung's presentation showed that Dell is using the drive in one of their servers. I am trying to get Samsung to send us a review sample but like I said earlier, Samsung's OEM side is not exactly the most convenient when it comes to review samples.