A $250 package in the Z87 arena would/should be numerate in its extras and offer the user something extra.  In the X79 space, $250 is rather low on the radar – not the lowest, but there are motherboards that cost over $500 that go all out on the feature set.  There is scope for MSI to do something good here. 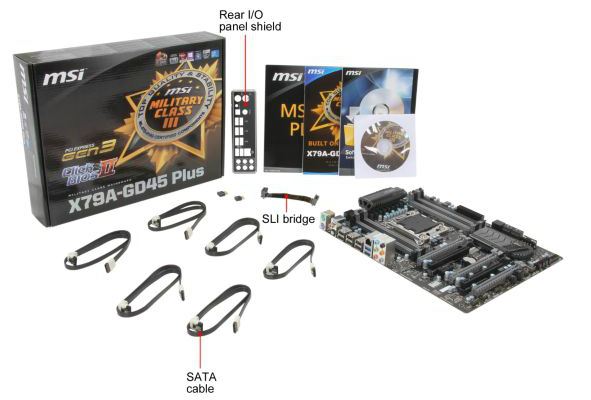 Along the line of few additional controllers on board, the MSI package also lacks any significant additions.  Having a full complement of SATA cables is probably a good thing, although having a second SLI cable for multi-GPU allocations might help, given X79 is the focus for >2 GPU setups.

Experience with MSI X79A-GD45 Plus

To begin with, all was not well with the X79A-GD45 Plus.  The OC Genie button does not seem to do anything from default.  The motherboard, when XMP is applied, gives MultiCore Turbo (top turbo when all cores are loaded), and it seems OC Genie does the same thing when XMP is not applied.  I expected at least a 4.2 GHz jump here when I tested.

For manual overclocking, our main limiting factor here is more our Ivy Bridge-E CPU sample than anything else.  Like the other Ivy Bridge-E refresh motherboards we have reviewed, our limit was around 4.4 – 4.5 GHz, the main issue being OCCT stability before the temperature of the CPU rose above suitable levels.

Our overclock results were as follows: