As one might imagine, ASUS’ propensity to configure their BIOS’ looks and features for specific product ranges means that the TUF range gets a similar treatment.  The base BIOS compared to our reviews of the Z87 Pro and ROG Maximus VI Impact is essentially the same, using the new design scheme as demoed first with the Z87 launch, with a blockier font but access to a My Favorites menu for user-defined options, a Last Modified menu to show was settings are changed and a Quick Note menu for users to leave notes regarding settings and overclocking for the next time in the BIOS. 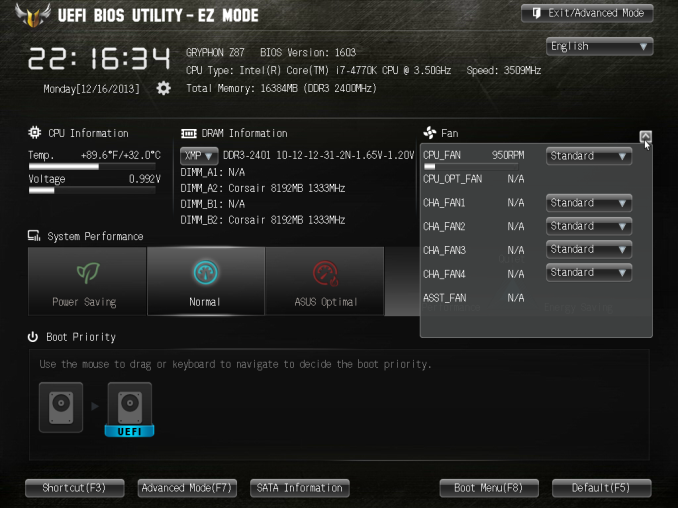 The first screen on show is the EZ Mode, giving the user the chance to enable XMP, adjust fan options, change general settings for system performance and modify boot priority without entering the advanced mode.  There are quick buttons for shortcuts and the advanced mode, as well as indicating to the user what is actually in the system – motherboard in use, CPU installed, CPU speeds, memory size, memory speeds, temperatures and voltages.

The main meat of the BIOS is in the advanced mode, and although the landing screen is ‘Main’, the ‘My Favorites’ menu will be the one oft used.  In order to add an option to this menu, press F4 on any option.  Here is a selection of the options I often use: 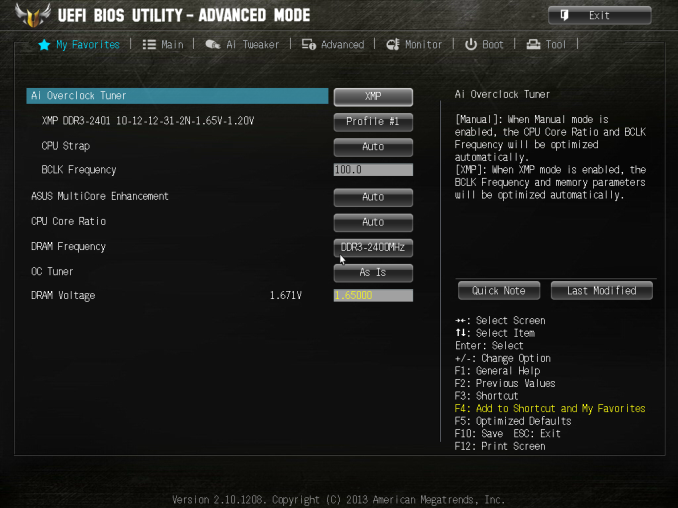 Overclockers might want to head over to the AI Tweaker menu, where ASUS open up a large number of options, including voltages and subtimings, for the experienced user.  The one most important is the AI Overclock Tuner, which allows a user to apply XMP to the memory kit. 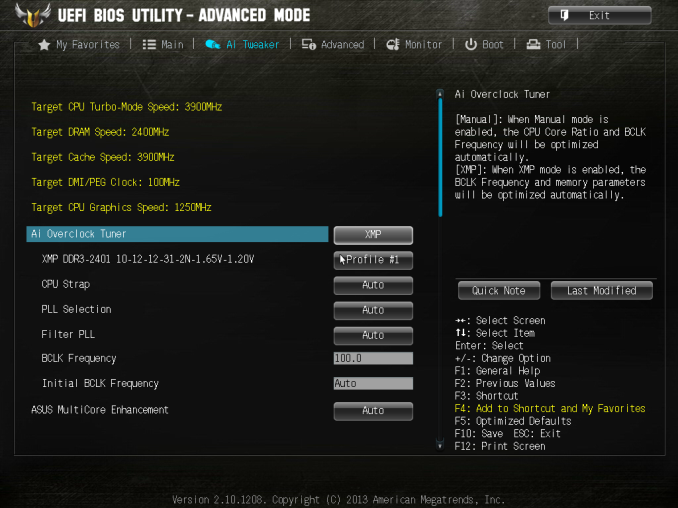 There are a limited number of automatic overclock options (understandable due to the purpose of the TUF range), but the OC Tuner option offers a quick overclock.  Further down the list are the DRAM Timing menus and DIGI Power menus, both staples of the regular ASUS BIOS that we have covered before. 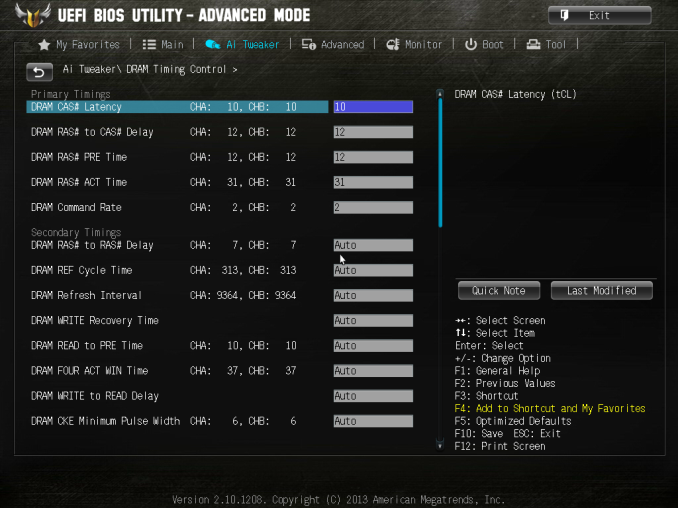 The ‘Advanced’ menu is for all the regular options any Z87 chipset-based motherboard needs to have, regarding configuration of all the chipset controls – SATA, USB, Platform, Network Stack, and so on.  Now in 2014, AHCI is default for the SATA mode selection, although for multi-monitor usage via the IGP this system will need to be enabled (System Agent Configuration -> Graphics Configuration).  Through the USB configuration a user can enable/disable various ports in case of blown ports or a workplace environment where ports should be disabled. 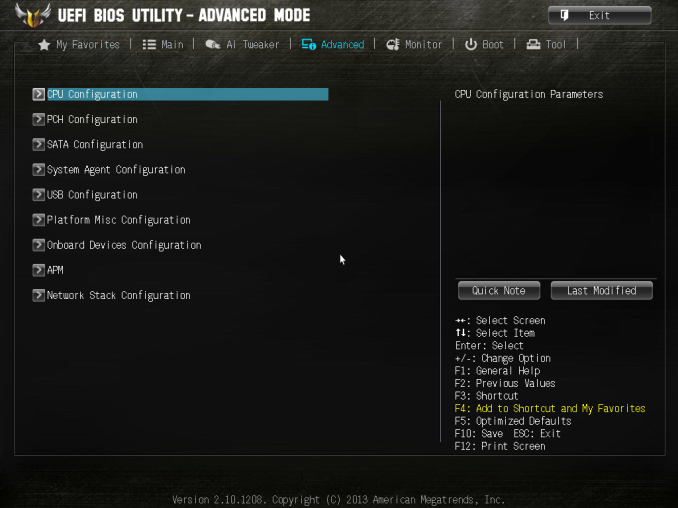 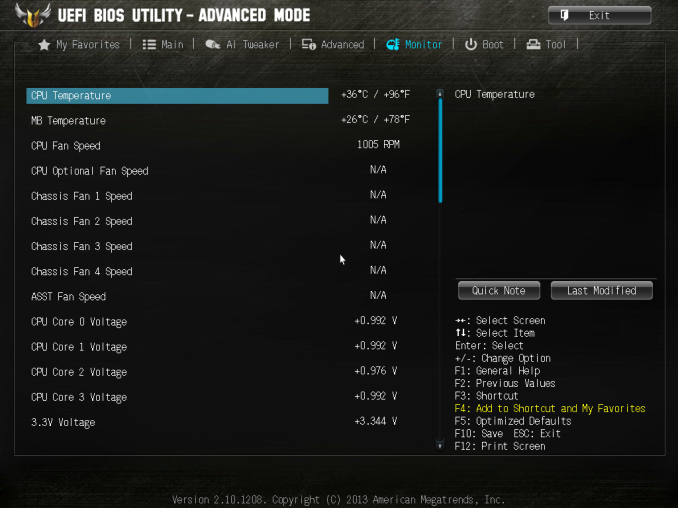 The interesting feature in this menu for ASUS TUF boards is the ‘Fan Overtime’ option.  This enables the fan to keep spinning after the system has shutdown to equalize the temperature between outside the case and inside.  If this feature sounds familiar, it is because another manufacturer has been using it for a while under the heading ‘Fan Dehumidifier’.  Due to not testing previous TUF motherboards from Z77/Z68 I cannot say who got their first (ASUS claim first generation was P67), although ASUS’ naming makes more sense. 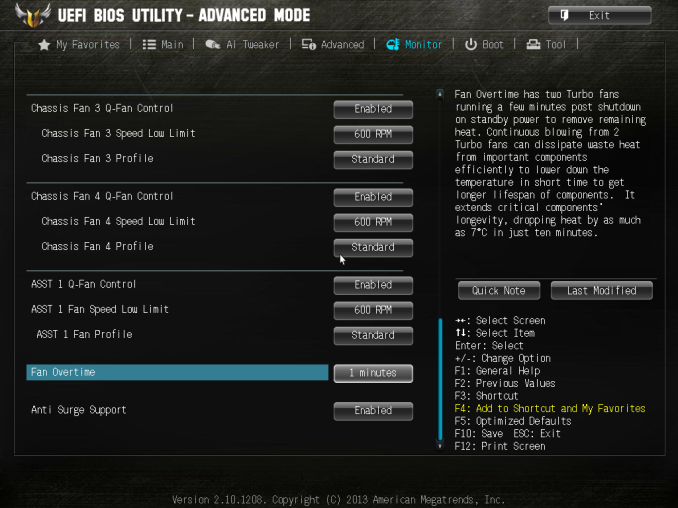 To wrap up the BIOS, we have our standard booting menu with quick boot overrides and EZ Flash 2 for updating the BIOS firmware.  I have been asked by users to point out that when updating an ASUS BIOS, all the OC Profiles are deleted – this applies across the range, and apparently was not clear to some users and thus I mention it here.  I would not be surprised if, with enough feedback, a manufacturer could engineer a solution to this. 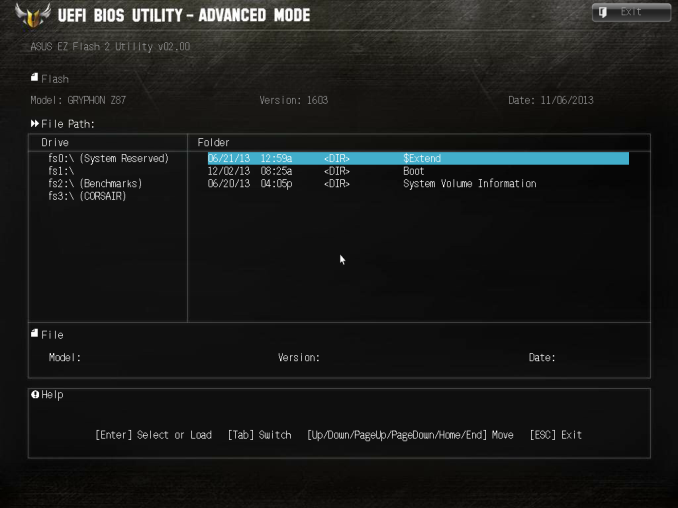 The principles behind the TUF range of software on the Z87 Gryphon are similar to that on non TUF motherboards, using a central interface to control all the features.  Due to the nature of the Z87 Gryphon and the market to which it is aimed, instead of DIP4 or AI Suite, we get a modified version defined as ‘Thermal Radar 2’, which to all intents and purposes acts like AI Suite III apart from the front screen focusing more on temperatures and fan settings. 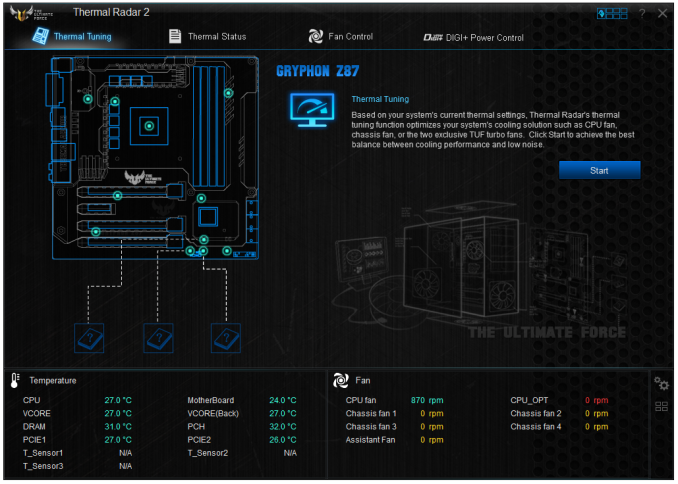 On the main Thermal Tuning screen, ASUS offers an optimization of the fan settings for all the fans on the board based on location and the temperature sensors.  Part of this algorithm uses ‘Zone Temperature Monitoring’ to give an indication of how ‘good’ a region is in terms of temperatures and how the temperature rises with respect to CPU power. 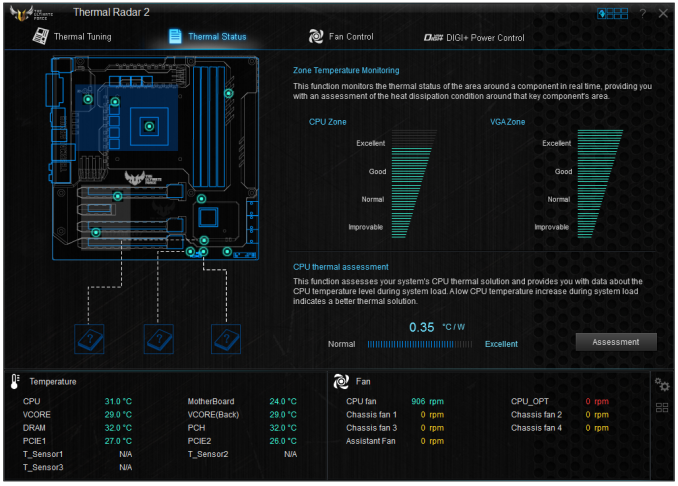 This is all given primarily in the Thermal Status section, with the Assessment button showing partly how these calculations occur.  As you may notice in our screenshots, ASUS are making the secondary section of the screen, underneath the main screen, full of temperatures and fan settings.

Repeating on the TUF philosophy, the interface allows for complete fan control with all the 4-pin fan headers on the motherboard.  The Fan Control section does this – users can select from preset modes (Silent, Standard, Turbo and Full Speed), or adjust the fan profiles individually. 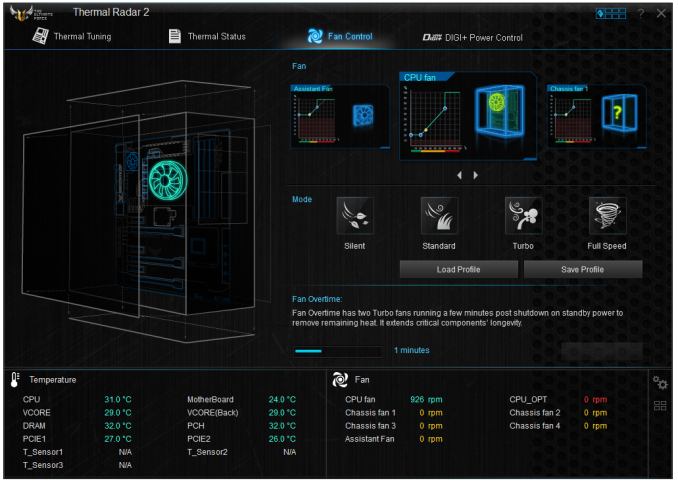 In the configuration mode for each fan, the fan profile can be set as a function of temperature against ‘percentage’.  When we quizzed ASUS about what this percentage is, they came back with power, rather than RPM.  This is a poor situation to be in, as RPM does not rise linearly with power.  Despite this, the system allows the temperature scale to be defined as a proportional average of the various temperature sensors on the motherboard. 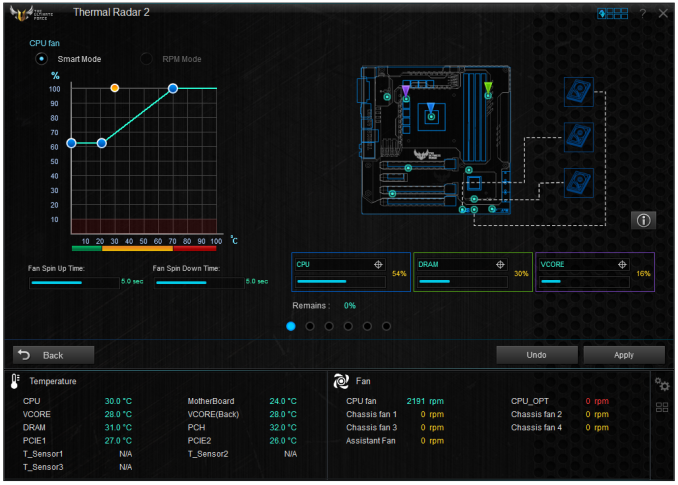 The TUF Z87 Gryphon offers several other features we have covered in previous ASUS reviews:

DIGI+ Power Control: Allows for adjusting CPU and PWM voltage/power response.  Useful for overclockers who need fine control.
Network iControl: Software implementation for network data prioritization.
USB 3.0 Boost: Offers an additional speed for Windows 7 USB 3.0 devices by implementing an updated driver on-the-fly.
EZ Update: Software to allow updates to the system, primarily drivers, software and BIOS.  While it is still not functional from my location, it is supposedly working in Taiwan/USA.
USB Charger+: Quick charging of a single device via USB 3.0 by disabling data transfer and increasing power delivery.
Remote Go!: Home cloud computing for media, files, remote desktop and so on.