For the purposes of our testing we’ll be looking at the 6 games we’ve adopted for use with FCAT due to their proven reliability. These are Total War: Shogun 2, HItman: Absolution, Sleeping Dogs, Battlefield 3, Bioshock Infinite, and Crysis 3. All of our results unless otherwise noted are using Catalyst 13.8b1 for the AMD cards, and NVIDIA’s 326.19 beta drivers for the GeForce cards. 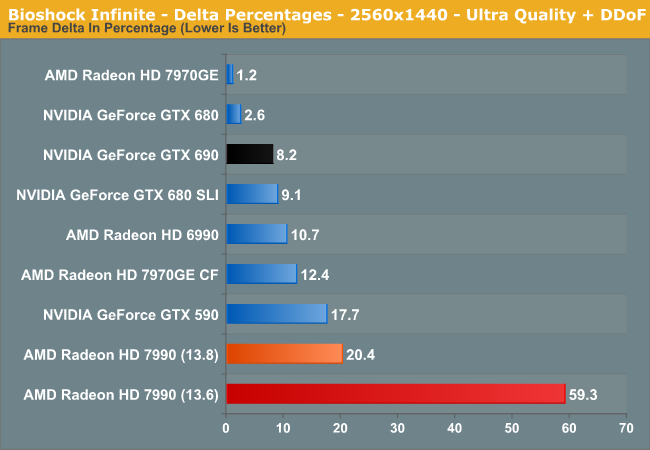 In general, a properly behaving single-GPU card should have a delta average of under 3%, with the specific value depending in part on how variable the workload is throughout any given game benchmark. 3% may sound small, but since we’re talking about an average it means it’s weighed against the entire run, as the higher the percentage the more unevenly frames are arriving. For a multi-GPU setup we’d ideally like to see the delta percentages be equal to our single-GPU setups, but this is for the most part unreasonable. There is no hard number for what is or isn’t right here, but based on play testing we’d say 15%-20% is a reasonable threshold for acceptable variance, with anything under 10% being very good for a multi-GPU setup.

Finally, in our testing we did encounter an issue with Catalyst 13.8 that required we make some slight adjustments to FCAT to compensate for this bug, so we need to make note of this. For reasons we can’t sufficiently explain at this time but has been confirmed by AMD, in some cases in Crossfire mode AMD’s latest drivers are periodically drawing small slices of old frame buffers at the top of the screen. The gameplay impact is minimal-to-nonexistent, but this problem throws off FCAT badly.

To quickly demonstrate the problem, below we have two consecutive frames from one of our Battlefield 3 runs. The correct FCAT color order here is dark blue, green, light blue, and olive. The frames corresponding to dark blue and green occur on frame one, and light blue and olive on frame two. Yet looking at frame two, we see a small 6 pixel high stripe of dark blue at the very top of the image. At this point the dark blue frame should have already been discarded, as the cards have moved on to the green and later light blue frames. Instead we’re getting a very small slice of a frame that is essentially 2 frames old. 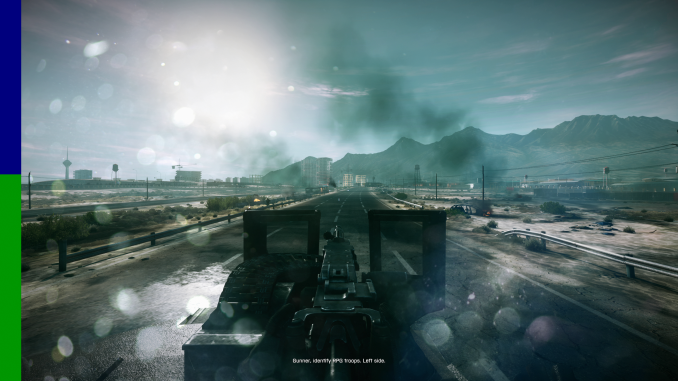 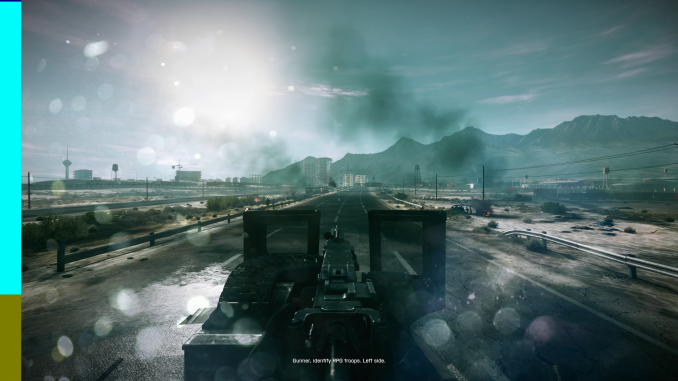 The gameplay impact from this is trivial to none; the issue never exceeds a 6 pixel slice, only occurs at the top of the frame (which is generally skybox territory), and is periodic to the point where it occurs at most a few times per minute. And based on our experience this primarily occurs when a buffer swap should be occurring during or right after the start of a new refresh cycle, which is why it’s so periodic.

However the larger issue is that FCAT detects this as a frame drop, believing that over a dozen frames have been dropped. This isn’t actually possible of course – the context queue isn’t large enough to hold that many frames – and analysis shows that it’s actually part of the old frame as we’ve explained earlier. As such we’ve had to modify FCAT to ignore this issue so that it doesn’t find these slices and count them as dropped frames. The issue is real enough (this isn’t a capture error) and AMD will be fixing it, but it’s not evidence of a dropped frame as the stock implementation of FCAT would assume.

Ultimately our best guess here is that AMD is somehow mistiming their buffer swaps, as the 2 frame old aspect of this correlates nicely to the fact that the dark blue and light blue frames would both be generated by the same GPU in a two-GPU setup.