We must thank the following companies for kindly providing hardware for our test bed:

Power consumption was tested on the system as a whole with a wall meter connected to the OCZ 1250W power supply, while in a dual 7970 GPU configuration.  This power supply is Gold rated, and as I am in the UK on a 230-240 V supply, leads to ~75% efficiency > 50W, and 90%+ efficiency at 250W, which is suitable for both idle and multi-GPU loading.  This method of power reading allows us to compare the power management of the UEFI and the board to supply components with power under load, and includes typical PSU losses due to efficiency.  These are the real world values that consumers may expect from a typical system (minus the monitor) using this motherboard.

While this method for power measurement may not be ideal, and you feel these numbers are not representative due to the high wattage power supply being used (we use the same PSU to remain consistent over a series of reviews, and the fact that some boards on our test bed get tested with three or four high powered GPUs), the important point to take away is the relationship between the numbers.  These boards are all under the same conditions, and thus the differences between them should be easy to spot. 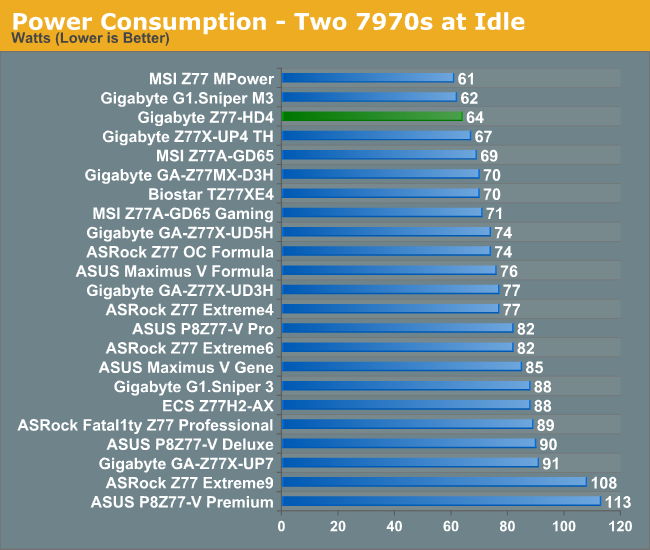 For a low cost motherboard with few features, we would expect it to have a lower power consumption than that of a mid-range Z77 motherboard.  The truth of the matter is that as a board is more expensive, especially at the high end, component efficiency is a factor in the overall board cost.  As a result, the Z77-HD4 does well at idle and CPU load, but breaks over 500 W in Metro2033.

Different motherboards have different POST sequences before an operating system is initialized.  A lot of this is dependent on the board itself, and POST boot time is determined by the controllers on board (and the sequence of how those extras are organized).  As part of our testing, we are now going to look at the POST Boot Time - this is the time from pressing the ON button on the computer to when Windows starts loading. (We discount Windows loading as it is highly variable given Windows specific features.)  These results are subject to human error, so please allow +/- 1 second in these results. 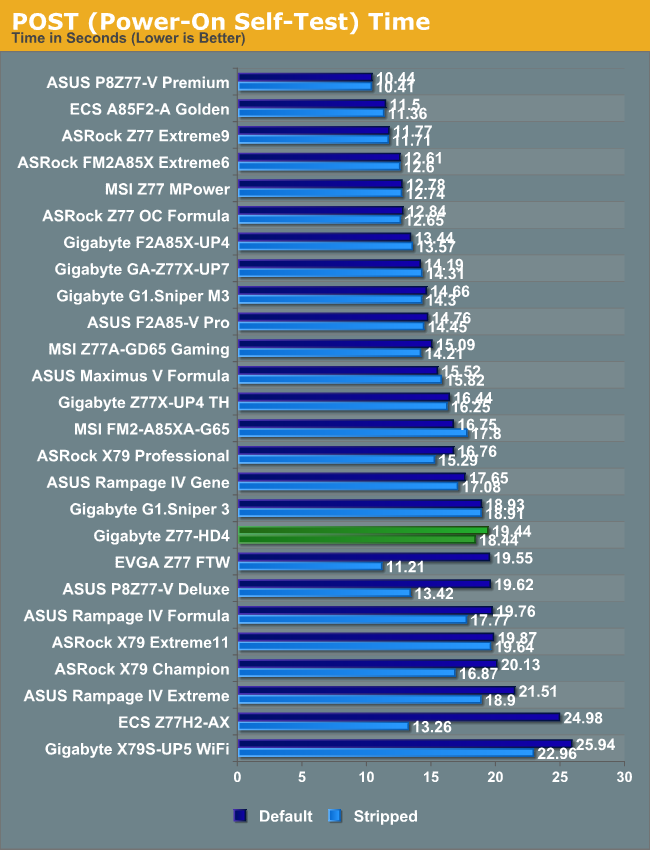 With fewer controllers, a cheaper motherboard would be expected to POST quicker than a more indepth motherboard.  But it would seem that the cheaper motherboards also have less time spent optimising the POST sequence.  As a result, the default boot time with two GPUs is north of 18 seconds.  The fact that the second GPU had to be in an x4 slot via the PCH may also be a factor in this.