I am always impressed when a motherboard manufacturer can elbow in a decent set of extra kit in with a SKU.  With motherboard margins getting tighter as the total motherboards being sold in 2012 was lower than 2011, it gets harder and harder to find the perfect package.  Some golden rules exist – a decent set of SATA cables (at least ½ the number of SATA ports), antenna if WiFi is included, a USB 3.0 panel/bracket if there are at least two USB 3.0 headers on board, and ideally both a rigid SLI and CrossFireX cable if the motherboard is multi-GPU capable.  For the high end products, we want something that differentiates the product line, such as a themed USB 3.0 panel, perhaps a gaming related keychain, or motherboard standoffs for overclocking oriented boards.

The ASUS MVF costs a pretty penny for a non-PLX enabled board, despite the wealth of features on board.  In terms of in-the-box contents, this translates to: 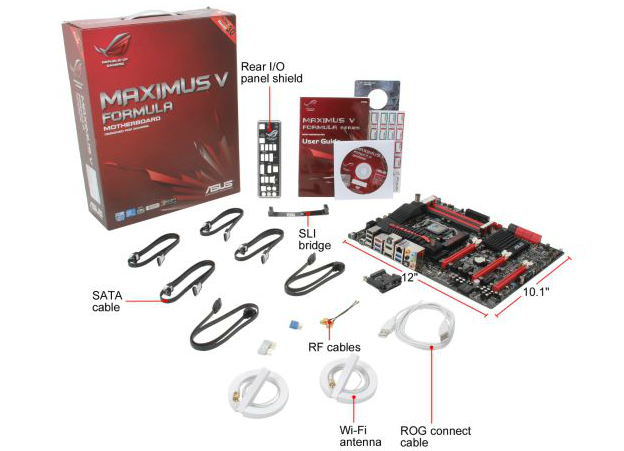 This is a typical ROG Gene/Formula gamut of box contents, and satisfies most of my in-the-box criteria listed above.  Aside from the door sign, there is nothing ROG labeled, though using the ROG Connect cable is an obvious sign of an ROG board.  I am becoming a big advocate of systems that include plastic standoffs for overclock testing, like the ASRock Z77 OC Formula, so it would be nice to see some here.

Note: Ivy Bridge does not overclock like Sandy Bridge.  For a detailed report on the effect of voltage on Ivy Bridge (and thus temperatures and power draw), please read Undervolting and Overclocking on Ivy Bridge.

As luck would have it, conditions were perfect for overclock testing on the MVF.  Ambient temperatures were low, giving an idle CPU temperature of 15°C on our open test bed and TRUE Copper cooler.

Automatic overclocking options are found both in the OS and BIOS, and for the most part the options (and the results of those options) were the same.  While there was not as many options to choose from compared to the ASRock Z77 OC Formula, all the options worked without much of an issue.  A couple of points concerned me however – voltages for various clock speeds seemed high (in order to make sure more processors hit the speeds), and no memory OC took place.

Manual overclocking took advantage of our Z77 and i7-3770K overclocking experiences.  The MVF accurately applied our selected BIOS voltage at load, and eventually reached 5.0 GHz at 1.400 volts stable under our testing conditions, hitting only 87°C under OCCT load.  We tried for 5.1 GHz, although even at 1.500 volts PovRay was not stable and temperatures hit 99°C.  The only other motherboard to hit 5.0 GHz stable in our testing was the Z77 MPower, although air testing is always limited by temperatures.  This is one area of testing in our reviews we wish to change in the future, to using chilled water.

CPU Level Up software in the OS offers three settings – 4.2 GHz, 4.4 GHz and 4.6 GHz.  These options are mirrored in the BIOS with two additional settings – CPU Level Auto and Gamers’ OC. 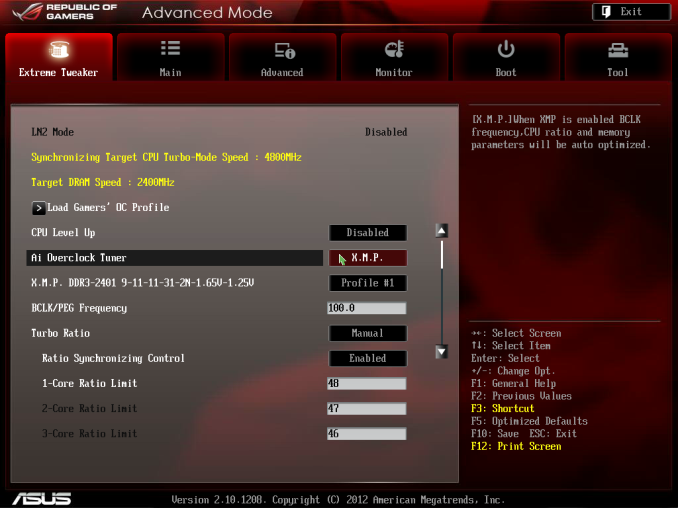 Results were as follows:

Overall, I personally found the voltages a little high, especially for CPU Level 1+2.  The Gamers’ OC option is a great one button tool to get a nice overclock across the board.

For manual overclocking we used the BIOS, starting at our nominal 4.4 GHz and 1.100 volt starting point.  Given our previous overclocking experience, the following settings were also changed:

For every setting we tested stability using a PovRay run and five minutes of OCCT. While not an extensive stability test by any means, it allows us to quickly evaluate every setting on every motherboard in a similar fashion. 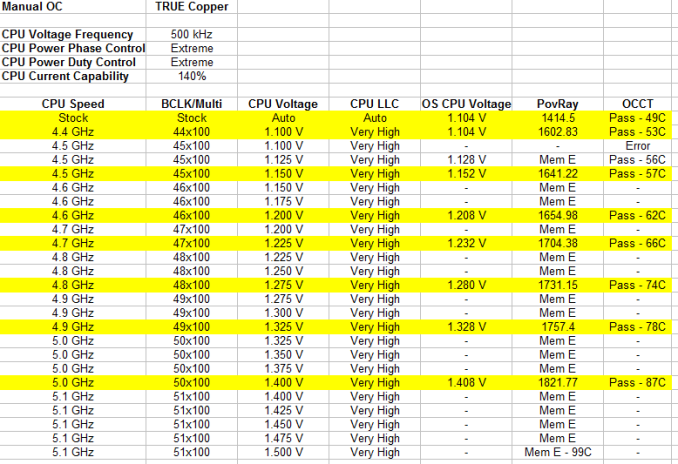 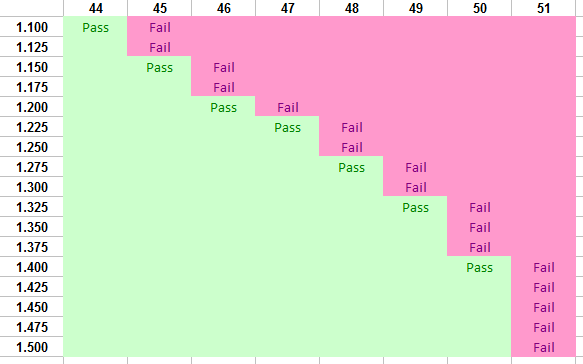 Hitting 5.0 GHz at 1.400 volts on our CPU is great.  It is a shame we could not get 5.1 GHz, though I am sure under the right water cooling setup it would be possible.

One common thought of ASUS boards is usually memory compatibility and the ability to push certain memory kits.  ASUS spend a lot of time ensuring that those purchasing the high end memory kits can use them and push them to their limits (regardless of what real world effect it may have).  For our memory testing I take a G.Skill 2x4 GB 2666 11-13-13 1.65 V kit and see where it goes.

Like all Z77 motherboards, the MVF handled XMP gracefully.  Moving up a strap to 2800 C11 also provided no issue, being completely stable.  What came next surprised me – the system successfully booted at DDR3-2933 C11!  At this speed I was near to either the limit of the memory or that of the CPU IMC, having hit DDR3-2950 for overclock competitions.  I nudged the BCLK up using TurboV EVO, managing to get DDR3-2962, a new personal record.  At this point after a few seconds the system crashed spectacularly, suggesting that perhaps some more voltage or setting tweaks could get the DDR3-2933 stable.  The MVF is the best Z77 motherboard we have tested for peak memory speeds so far under our methodology (I do not doubt that a memory enthusiast could do better!).