Before we get started, we’d like to introduce Ashu Joshi to our readers. He has a background in networking and has used a variety of home automation devices over the years. As such, he brings a useful perspective to our staff and can help augment our review coverage. Note also that as with all of our articles, these pieces reflect the opinions of the writer(s) and are not in any way associated with or influenced by any other source (e.g. other employers).

Philips sent out a review sample of their new Hue lighting system, a set of three Hue lights with the Hue Bridge that allows you to remotely control the lights. Besides being able to turn the lights on or off, the big claim to fame of the Hue is that you can set the lights to a variety of colors, or you can even program them to cycle through colors. Home automation systems are often proprietary and can be quite expensive, so the entry of Philips into this market (albeit in a limited fashion) with their Hue lighting system has the potential to shake things up a bit. 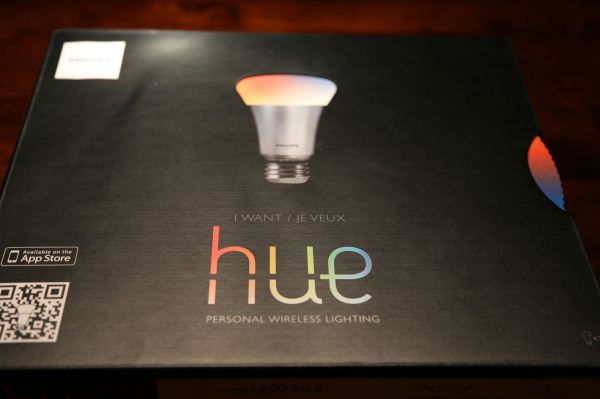 The lights have colored LEDs, and while the initial pack only includes three Connected Bulbs (referred to informally as "bulb" or "light" throughout the remainder of this review), you can potentially add up to 50 lights throughout your house/property. One thing that hasn’t changed yet however is that pricing is quite high: the initial Starter Pack will set you back $200. But how does the Philips Hue work in practice, and could it be worth the cost of entry? Note that at present, the Philips Hue is only appears to be sold through the Apple Store as an “App-Enabled Accessory”, but Android is also supported. Long-term we will likely see support for other operating systems as well, but for now this is primarily an iOS/Android targeted device.

One thing that immediately stands out with the Philips Hue is the packaging. It’s very well designed and eye-catching, and I love that you’re able to get a preview of the lighting options with the dial on the box. I set up my Philips Hue controller and bulbs recently, and my initial impressions have been very positive. It’s very easy to install and the experience of this lighting system is quite the change from your everyday lights. I uploaded a few videos of the package in action so you can see what it looks like.

Included in the package are three Connected Bulbs, and they’re quite a bit heavier than a typical light bulb. Most likely the added weight comes from the controller and antenna necessary to talk to the network, and possibly the addition of multi-colored LEDs adds a bit as well. Whatever the reason for the added weight, at least the heft makes you feel like you’re getting a bit extra for the $60 per light. 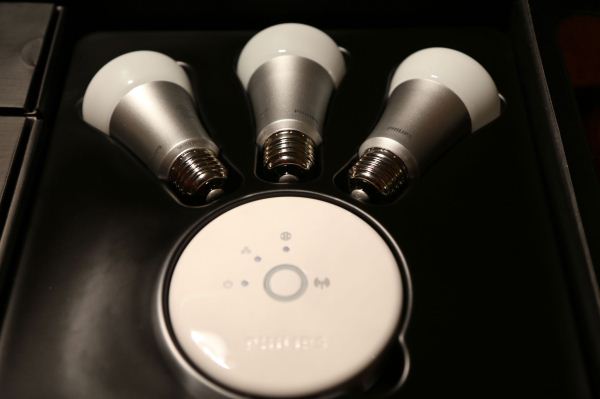 The other major item included with the Starter Pack is the Hue Bridge. This is a small, circular, lightweight controller with three LEDs on the top and a large circular button in the center used for the pairing function—Philips refers to it as the “link” button. On the side is an Ethernet port to connect to the home network and a power receptacle. The three LEDs show the status of Power, Ethernet, and Internet connections. There is no lettering to indicate what the LEDs are for but they use fairly common icons to indicate the function.

You also get a power adapter with a reasonably long cable for the Hue Bridge, though this is somewhat subjective. I have seen plenty of products where to save pennies they have short cables that ruin the setup experience and force the use of an extension cord, but for most users the Hue adapter should prove sufficiently long. An Ethernet cable is also provided to connect the Hue Bridge to your network, so plan ahead and realize that the Hue Bridge will need both power and network wires and place it accordingly.