With a specific line of motherboards, it would be great to assume that each manufacturer would tailor the BIOS and software to the branding in question.  This means a change in color themes, styles, logos and philosophy (plus more wishy-washy sounding applications).  It is very easy to stick in the ‘usual’ system, and the benefits therein would lie in consistency across the range.  But when a product is endorsed/uses a branding under license, there has to be some extra element to the package.

Across the motherboard manufacturers, the top tiers are getting on the bandwagon and recognizing this.  It goes beyond making sure all the slots on the board are the right color.  The ASUS ROG team is actually a separate division within ASUS, making the transition easier.  With ASRock, Gigabyte and MSI, the high end teams are still part of the channel divisions, meaning that adding the extra element involves diverting team members away from their normal tasks.  MSI use Big Bang marketing on the software, but the BIOS is the same; Gigabyte lacks any segregation between their channel gaming and OC certified brands in this respect, and ASUS have filtered skins and styles.  ASRock has already shown with the Z77 OC Formula that they can run different brands side by side, but Fatal1ty is perhaps a different kettle of fish.

Last year we examined the Z77 Fatal1ty Professional, which used a red themed BIOS adorned with the Fatal1ty logo – a definite step up from P67 BIOSes that insisted you see Fatal1ty’s mug all the time.  The software was themed as well, turning the ASRock eXtreme Tuning Utility into F-Stream, and implementing the Fatal1ty mouse port.  The X79 Fatal1ty series motherboards, under the latest BIOS, follow this livery.

The Champion and Professional are much the same in their option range, and for the purposes of this review we are going to use screenshots from the Champion motherboard.  Like all ASRock motherboards tested to date, there is no easy mode for the BIOS and we go straight into the meat of an advanced mode.  The first screen on show is the Main screen, giving us the name of the motherboard, the BIOS version, the CPU installed, the current speed of that CPU, the memory installed, a DIMM slot breakdown of sizes and speeds, and a couple of options to various features.  As always, on the first screen of a BIOS I want information, and ASRock covers most of the bases, although ideally I would like some temperature values in there and some voltages/fan speeds, just to make sure that I have not forgotten to put the liquid cooler pump onto a fan header (again). 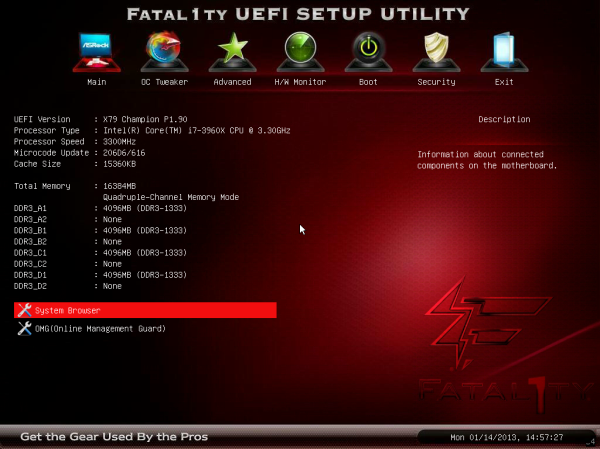 One of my main gripes with current BIOS implementations is the lack of user experience.  We get an opportunity to present the BIOS like it was software, and rather than an all-singing and all-dancing implementation using graphical representations and limitless possibilities, we get a wall of text and are told to enjoy it.  The Fatal1ty range falls under the latter, which may or may not still be the case for the 8-series motherboards later this year.  ASRock’s latest Z77 OC Formula makes a small step in the positive direction (better layout, higher definition graphics), but it is still a long way to being a true representation of the original UEFI vision.

The nearest we really get to that vision in this BIOS is through the System Browser option on the Main screen, which displays a 2D image of the motherboard being used and highlights all the slots that are populated.  Here the user can check whether everything is being seen at the BIOS level properly, such as PCIe devices, memory, SATA drives and so on.  On the whole this is a good option from a debugging perspective, especially when family member X calls up and complains that they have only got 12 GB of memory. 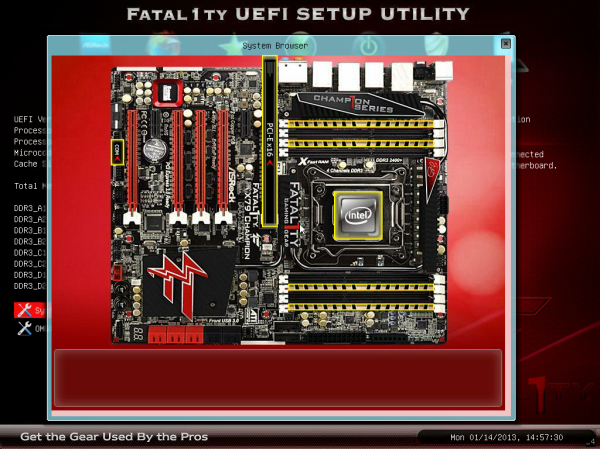 Beneath the System Browser option is the oddly named Online Management Guard (OMG for short).  With OMG the user can select various hours at which the network controllers are disabled, such that if a user wants to limit the amount of time other users (such as children) are limited to the internet in the evenings.  There are a few small issues, such as the granularity is only in hours, it disables everyone (even the owner) from the network, and it can easily be bypassed with a trip into the BIOS itself. 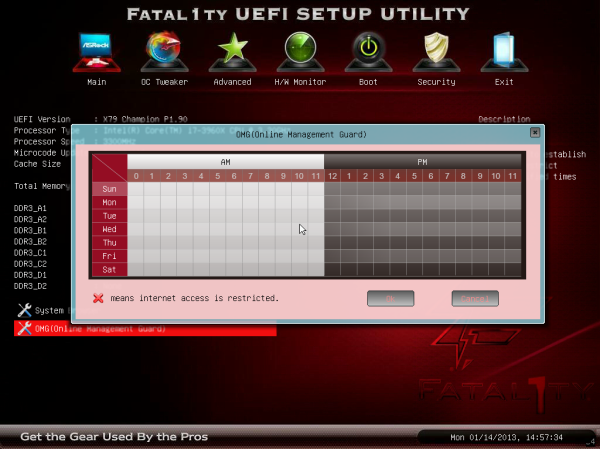 Users looking to overclock the CPU or enable XMP should navigate to the OC Tweaker menu.  ASRock does a good job in laying out the various overclocking options in terms of CPU, power, memory then voltages, and we also get a ‘description’ bar on the right hand side as an explanation to what each option does.  This description bar is something severely lacking in many other motherboards on the market, so I am glad we have one here.

The OC Tweaker menu provides a selectable list of ‘CPU EZ OC Settings’ which range from 4.0 GHz to 5.2 GHz in 200 MHz increments and use a pre-programmed look up table for overclock settings.  Testing these (and observing which settings change) is often a good way to start an overclocking adventure, as well as finding the limits of the setup. 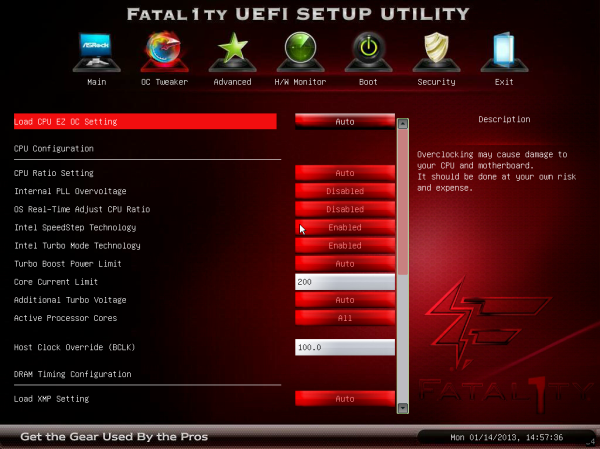 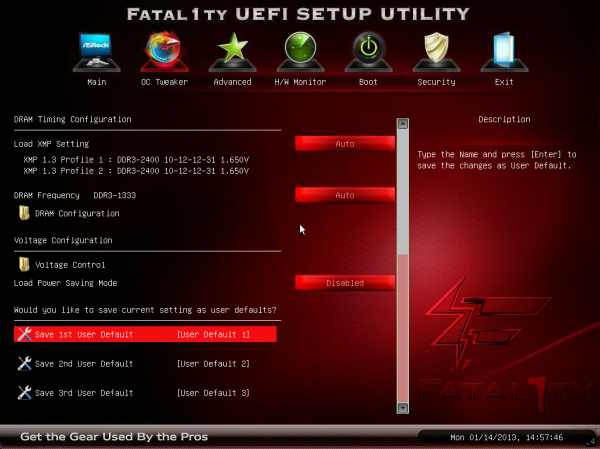 The memory sub-timing menu is suitably verbose such that seasoned overclockers can get to grips with the most obscure of settings, but also contains a list of Auto presets for anyone dealing with the primary sub-timings.  The voltage control menu offers the main voltage change options (CPU Core, VCCSA, VTT, PLL, PCH and DRAM) as well as Load Line Calibration settings with a handy graph describing what each LLC setting does.  The overclock options are sufficient for most users, although for extreme overclocking some users would also like access to slew and skew rates, which are standard BIOS options on the gaming/overclocking-oriented ASUS ROG boards. 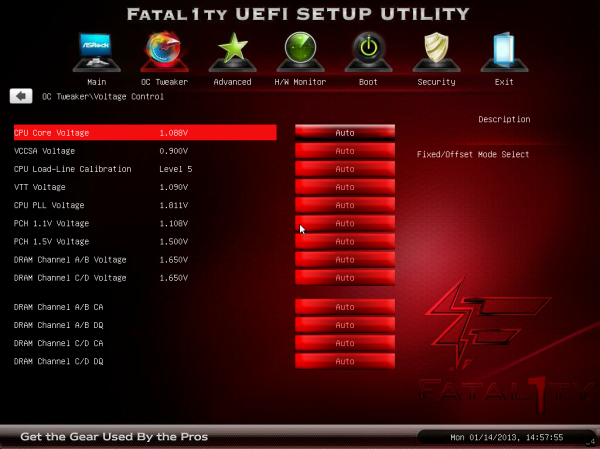 This is an unfortunate set of circumstances, as I am sure that shifting the Professional to Gen3 by default would offer various niche scenarios with more performance. 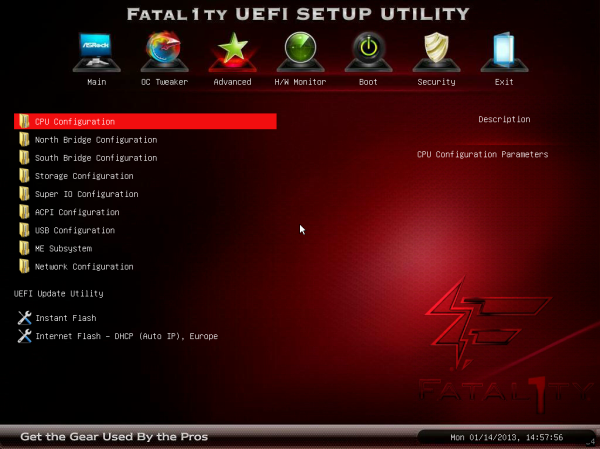 Also in the Advanced tab is our BIOS/UEFI update options.  ASRock offer a direct download and flash option from the BIOS itself if you have an applicable wired home setup (no WiFi or ICS), or update via USB for everyone else.

The H/W Monitor tab shows the temperature sensors and fan speeds of all the headers on board.   For fan controls, the CPU fan headers are controlled as one and the Chassis fan headers get treated individually.  Any PWR headers have no options, but the default setting for all fans is 100% fan speed all the time.  This is a little game ASRock play which allows reviewers to get higher overclocks on stock settings in exchange for a higher fan noise which reviewers tend not to test.  With regard to the fan options, the CPU fans are given a target CPU temperature and a target fan speed – if the CPU temperature goes over the target temperature, the fan will ramp up until it is brought back down.  Below the target temperature, the fan will spin according to the target fan speed. 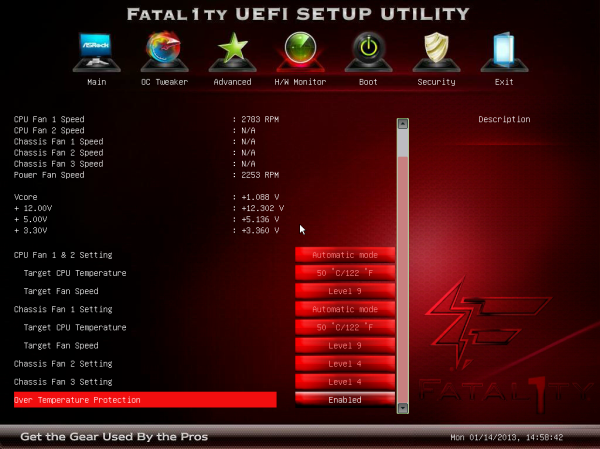 Elsewhere in the BIOS we have boot options and security configurations.  Unfortunately we are missing boot override functionality that allows for a one-time boot from an attached device without adjusting the boot order.  This is a feature we see on some other manufacturer’s products that helps when dealing with external bootable devices.