AMD Q4’12 and FY 2012 Earnings: Closing Out a Rough Year, Looking Towards the Next

Continuing the spate of earnings announcements this week we have both AMD’s Q4’12 and fiscal year 2012 earnings. The 4th quarter presents something of a culmination of several events for most companies; not only is it the final quarter of the year and the time when they release both quarterly and yearly results, but it also encompasses the holiday shopping season that is most tech companies’ strongest quarter. For AMD in particular it also marks the end of what has been a rough year for the company, as they continue to work on a gradual reorganization that will see the company’s focus shift to ultra low power client devices, semi-custom SoCs and dense servers through 2014.

For the quarter ending on December 29th, 2012, on a GAAP basis AMD booked $1.16B in revenue, with a net loss of $473M. With the exception of Q2’12, AMD has been losing money for the last few quarters, and Q4 was expected to be much the same. Compared to both Q3’12 and Q4’11, this marks both a drop in revenue and net income, making this one of the roughest quarters yet for the company. The overall gross margin for AMD was a mere 15%, far below the break-even point as they currently operate.

Yet despite these initially bleak numbers, it’s interesting to note that these numbers are considered to be relatively good for AMD. Wall Street analysts were actually expecting AMD to lose more than this for Q4, so AMD essentially lost less money than was expected. Which isn’t to say that this was a good quarter for AMD – losing money is losing money – but for what AMD has been going through the last few quarters, merely beating the street is an important accomplishment for AMD as they need to keep investors satiated if they’re to complete their product transition.

So what’s dragging down AMD at this point in time? First and foremost of course is the continuing weakness in the PC market, which will remain AMD’s core market for at least the next year until they’re farther along with their shift. This is the same weakness that finally drove Intel’s gross margins below 60% for the first time in years, and unfortunately for AMD when Intel’s being pressed upon, Intel in turn begins pressing upon AMD. Unfortunately for both companies, Windows 8 did not generate a significant increase in PC sales or margins, so while other computing markets like tablets are still seeing growth, some of that growth is coming at the expense of PCs, where AMD suffers significant exposure.

Along with weak PC sales, AMD has also once again had to take a number of one-time charges for various aspects of their business. As announced back at the start of the quarter, AMD is cutting 15% of their workforce and taking a restructuring charge on that. Meanwhile due to those weak PC sales, AMD had to amend their wafer share agreement with fab partner Global Foundries, as AMD was contracted to buy many more wafers from GloFo than the company ended up needing. The amendment saves AMD money in the long-run by reducing the number of wafers the company needs to buy to a more realistic level given AMD’s situation, but in the short-term AMD has to pay a significant penalty to GloFo which is being reflected in their results. Altogether AMD paid $363M in various one-time charges in Q4, making it the single biggest factor driving the company into the red.

In fact if we look at AMD’s non-GAAP results, which effectively exclude one-time charges, we can see that AMD had a better quarter; not great, but better. Even without those charges AMD still lost $102M for the quarter, which is actually a smaller non-GAAP loss than the previous quarter and hence the reason this quarter is being considered relatively good for AMD. Non-GAAP gross margin reflects the much smaller loss at 39%, which is better but again lower than where AMD needs to be.

Moving on to AMD’s yearly results, with AMD having lost money most quarters of 2012, it comes as no surprise then that their FY 2012 results are equally dour. Again on a GAAP basis AMD booked $5.42B in revenue, with a staggering net loss of $1.18B. The vast majority of these losses were in the form of payments to GloFo as part of AMD’s wafer share agreement amendment and AMD’s earlier limited waiver of exclusivity, adding up to just shy of a billion dollars at $976M. This means that much like AMD’s Q4, their non-GAAP yearly results are far better with AMD having only lost $114M, but again this is still a loss and comes amid a $1.3B drop in revenue compared to 2011.

Diving into the results for AMD’s various divisions, once again AMD’s CPU/APU division (Computing Solutions) has taken a significant hit. Revenue for Q4’12 was $829M, down some $480M from Q4’11. This translates into an operating loss of $323M for the division for the quarter, with a loss for the year of $231M. Meanwhile CPU/APU average sales prices were also down compared to Q4’11, exacerbating the situation further by reducing the amount of revenue AMD pulled in on the smaller number of parts they were able to sell.

AMD’s Graphics division on the other hand continues to truck along. Graphics has never been AMD’s primary business and consequently nowhere near their largest business, but the division has continued to turn out a small operating profit each and every quarter, including Q4. For the quarter Graphics booked $326M in revenue with an operating income of $22M, while for the year they booked $1.41B revenue with $105M in operating income. Graphics has been affected by the slowdown in PC sales just like AMD’s CPU/APU business has, but it hasn’t been hit nearly as hard overall, with revenue falling less than $150M while operating income has actually more than doubled. This is thanks in part to the fact that Graphics ASPs were up on a yearly basis, helping to offset the decline in units shipped.

Wrapping things up, with 2012 ending on a sour note AMD is looking towards what it can do in 2013 to make sure the company makes it through their planned reorganization. With AMD having taken the brunt of their recent one-time charges in Q4, there should be few (if any) charges in 2013 so long as something new doesn’t come up. AMD’s operating situation has been rough, but it’s the one-time charges that have really hurt the company in the last year, so avoiding further costs like restructuring charges or contract amendments will go a long way to keeping the company going. 2014 is when most of AMD’s major initiatives come to fruition, making the next year extremely important to the company.

The biggest factor over the next year will be to conserve cash. As of the end of Q4 AMD had just over a billion dollars of cash and cash equivalents in the bank. This is actually quite a bit of cash given AMD’s declining revenues, however due to the nature of the semiconductor business AMD needs to keep quite a bit of cash on-hand for day-to-day operations. It’s not clear just how much is enough right now – AMD’s post-transition goal is $700M-$800M – but it has been getting low enough to take more drastic actions such as selling their Lone Star campus in Texas.

To that end, due to operating losses and various one-time charges AMD’s cash reserve has shrunk by nearly $300M in the last quarter. AMD’s turnaround will take several quarters, so until that completes AMD may need to raise additional cash and to otherwise control their cash flow if they are to make it through 2013. 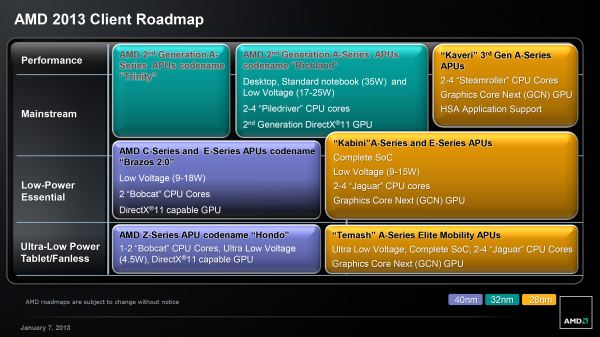 Looking forward, while AMD’s ultimate goal is to get to 2014, 2013 will still see the launch of several products. AMD has stated that their Trinity-derived Richland APU is already shipping to OEMs, meanwhile APUs based on their forthcoming low-power Jaguar core are due in H1. Also shipping this year will be AMD’s Sea Islands GPU family, and AMD’s first HSA capable APU, Kaveri, is still scheduled for this year. It’s too early to tell how any of those product families will do, but of everything AMD will be launching this year it’s their Jaguar products that stand to shake up the market the most. Jaguar and its successors are also a major part of AMD’s post-restructuring plans, so early success there would bode well for AMD’s long term plans.