The AMD Athlon: Too hot for PC

As it stands, the Athlon is quite an attractive processor, especially in the retail market.  The perfect example of this is the fact that you can currently pick up a 1GHz Athlon, using the Thunderbird core, for under $300.  Because of its extremely competitive price, retail boxes feature the CPU in systems that range from $1,400 - $1,600 in overall system price (not including a monitor).  As far as the competition is concerned, a 1GHz Pentium III is almost $200 more expensive and can only be found in the most expensive retail systems, priced at $2,000 and above.

The introduction of the AMD 760 chipset also brought about the introduction of three new Athlon processors, all of which support the 266MHz (133MHz DDR) FSB frequency.  These are the new 1GHz, 1.13GHz and 1.2GHz processors that are specifically made for use on AMD 760 boards or other upcoming boards that feature 266MHz FSB compliant chipsets such as the VIA KT133A and the ALi MAGiK-1.  As it stands now, these 266MHz FSB parts will be AMD’s performance market segment offerings, and have made their way into systems priced at $1,800 and above.

The current Athlon CPUs, as you see them today, will carry AMD for the next couple of months into the start of next year.

We mentioned that AMD sees no need to increase the clock speed of the Athlon just yet, unfortunately there is another reason.  With the 1.2GHz Athlon already radiating 54W of heat, and a theoretical 1.4GHz Athlon producing an average of 72W of heat, you can see where AMD could run into a pretty major problem by ramping up clock speed too quickly.

We’ve known for a while that the Athlon is a very hot running CPU, and with this heat being dissipated comes an increased amount of current draw, which puts a greater stress on the motherboard and the power supply.  While Intel was in a position to adopt the new ATX 2.03 standard and the accompanying ATX12V power supply specification which directly addresses the issue of supplying enough power to certain hotspots on the motherboard, AMD can’t possibly expect to do that with the simple introduction of a higher clocked Athlon.  This paints a picture of two problems with the Athlon, it’s running too hot, and it’s drawing too much power.

Luckily AMD realizes this issue and has taken into account the need for a remedy.  Thus the majority of what will be going on in 2001 with their Athlon line will be surrounding the release of the successor to the Thunderbird core: the Palomino.

The Palomino core is ready, as we saw a demo of it in AMD’s suite at this year’s Fall Comdex running at no less than 1.5GHz (air cooled) and it will begin sampling by the end of this year with full production shipments commencing in the first quarter of 2001. 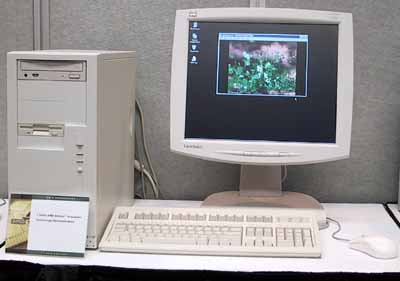 Provided that AMD sticks to this schedule, we should see a 1.33GHz (1333MHz – 266MHz FSB) Athlon based on the Palomino core debuting early next year.  The real question is, what does the Palomino offer in terms of enhancements over the current Thunderbird core?