With the upcoming release of the Pentium 4, the Pentium III will drop down a notch and will now be Intel’s mainstream desktop CPU. 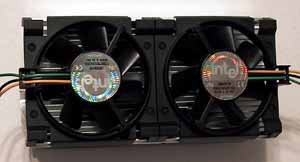 The reasons behind this are two fold.  For starters, Intel would definitely not want another repeat of the 1.13GHz recall.  Even though the recall was not on a large scale (less than 200 CPUs were actually out in customers’ hands), it truly impacted our readership as well as other enthusiasts since it was the first time in quite a while that an Intel desktop CPU was pulled back.

Interestingly enough, the slowest Pentium III on Intel’s 2001 roadmap is the 800MHz part which Intel is targeting at the $1,000 - $1,200 system price range.  Keep in mind that this is just slightly above the $850 - $999 price range which is supposed to be occupied by the Celeron 766/733 in Q1-2001.  By the second quarter in 2001 the slowest Pentium III on the roadmap is the 933MHz part, and by the third quarter of next year everything but the 1.13GHz and the 1GHz Pentium IIIs disappear from the roadmap.

What’s happening to the rest of the Pentium III line?  Intel is unfortunately in a bit of a predicament here.  The Pentium III, especially the 650 – 750MHz range that isn’t present on their 2001 roadmap, would end up outperforming even the 850MHz Celerons that are due in the middle of next year.  But, clock speed sells, so Intel is going to have to ditch the lower clock speed Pentium IIIs as to keep them from competing with the Celerons.

By the end of January you can expect all of the Pentium IIIs below 800MHz to be priced between $100 and $200, with very little ($10/$20) or no variation between the prices of different speed grades.  If you’ll notice, this is pretty much the price range that all of those CPUs fall into currently, illustrating that between now and next year you shouldn’t expect to see too far of a drop in price for these sub 800MHz Pentium IIIs.  If you’re looking to buy one of these CPUs, don’t expect to see a huge price drop anytime soon.

Speaking of price, we can expect the 1GHz Pentium IIIs to drop another $100 between now and the start of next year.  No word on how much the 1.13GHz Pentium IIIs will cost upon their release.