The Celeron gets back on the bus

The announcement was made not too long ago that Intel would be scrapping their Timna processor due to a lack of interest from OEMs.  The Timna CPU, as we first mentioned in our coverage from the Spring 2000 Intel Developer Forum, was supposed to be the first CPU from Intel that used a technology they called “Smart Integration.”  Smart Integration was basically a simple term which indicated that the Timna CPU would feature an integrated memory and graphics controller, thus making it perfect for sub-$600 PCs and possibly even notebooks.

Unfortunately the memory controller that was to be integrated into the Timna CPU was the same RDRAM controller that had caused the failure of the i820 and i840 chipsets.  Intel then planned on using their MTH to provide SDRAM support for Timna platforms, but with the MTH bug and the recall of all MTH boards those plans fell apart immediately.

Throughout next year the Value Processor from Intel will continue to be the Celeron based on the Coppermine128 core.  By “Value Processor” we mean that it will be found in pretty much all retail sub-$1000 systems. 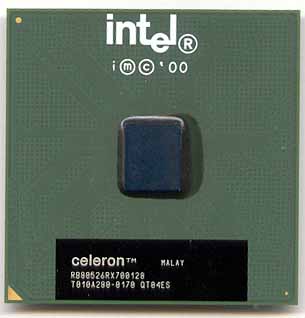 We’ve continued to mention that the Duron, even at its current clock speeds (700 – 800MHz) will have no problem competing with even a 1GHz Celeron, so how does Intel hope to make the Celeron competitive in 2001?

When the Coppermine128 core was first released we asked Intel why they weren’t moving the Celeron line to a faster (100MHz) FSB which would definitely help increase its performance.  Their reasoning was basically that the Celeron would move to the 100MHz when it was absolutely necessary.

The release of the Duron processor and its subsequent trampling of the Celeron in terms of performance has met Intel’s criteria for making the 100MHz FSB absolutely necessary.  The result is that in the first quarter of 2001 we will see the introduction of the last 66MHz FSB Celeron CPU and the first 100MHz FSB Celeron processor.

The Celeron will hit 850MHz before the end of the first half of 2001 and we should see speeds of 900MHz and higher before the years end.  At the end of 2001 the move to all 100MHz FSB Celerons should be complete.