In and Around the HP EliteBook 2170p

If you've seen the other current and last generation HP ProBooks and EliteBooks (and we've reviewed a couple), the EliteBook 2170p's shell design isn't going to be new to you. The aesthetic is a beautiful one, with a silver aluminum lid and interior, then matte plastic used for the bezel and the bottom panel. This is a solid, well thought out design, complete with a sturdy hinge and strong backing for the display. The problem with the 2170p, though, is the complication that arises from shrinking HP's enterprise motif down to this form factor.

HP employs the same chiclet keyboard style they use across their business and consumer lines, and as far as chiclet keyboards go, the feel and travel continues to be excellent. There's a bit of flex from the backplate that's unwelcome, but the white LED backlighting is attractive and as a whole this is a very usable keyboard. I'd go so far as to argue that this is why ultrabooks may not be for everybody; thicker ultraportables like this one offer superior key depth and consequently may offer a better typing experience as a whole. 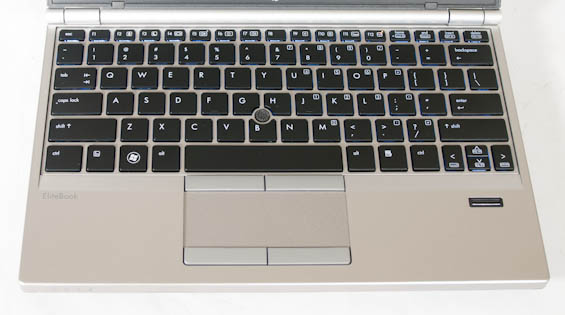 Which is why I'm mystified as to who at HP thought it would be a good idea to change the key layout from their own established conventions. "Fn+Up" and "Fn+Down" still result in "Page Up" and "Page Down," but "Fn+Left" is now "Scroll Lock" and "Fn+Right" is now "Pause." "Home" and "End" get their own keys at the top to the left of "Insert" (destroyer of worlds) and "Delete," but it's almost more confusing to split up the document navigation keys this way. These seem like minor changes, but watch how quickly they blow muscle memory and intuition out of the water. In time you can adjust, but it's still bizarre that HP would do this in the first place.

The touchpad, unfortunately, takes a major hit from the form factor shrink. HP includes a trackpoint and buttons under it, but then the touchpad and another pair of mouse buttons under that. That would be fine if HP tried to grab whatever real estate they could the way Lenovo did with the ThinkPad X100e/X120e, but realistically they probably should've let the trackpoint go and been done with it. As a result, even my spidery fingers wound up having trouble getting any mileage out of the touchpad. Maybe it's Stockholm Syndrome finally setting in, but I almost feel like just switching to a clickpad would've been the best way to maximize the space. 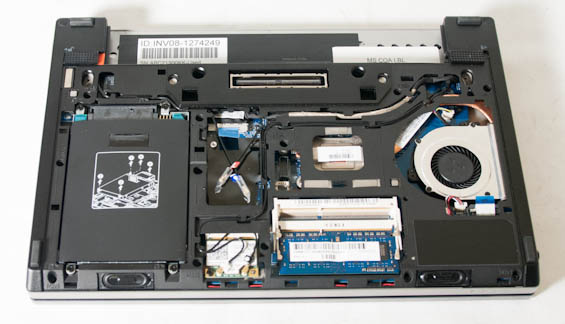 Finally, while the EliteBook 2170p is light, it's also very thick for an ultraportable, at just over an inch, and I'm not convinced HP's internal design is the most efficient. When you're dealing with something like the Acer Aspire V5-171, which is basically a budget ultraportable, you're willing to accept a lot of sacrifices because of the price point. With something pricier and higher quality like the EliteBook 2170p, though, the pressure is on to get things right, and HP's design feels strangely archaic.

It looks like HP sacrificed a lot to get that docking connector in place, including z-height, but it would've been nice to see an mSATA port somewhere in this chassis, or alternatively, for the mini-PCIe slot reserved for the WWAN card to be able to pull double duty for those of us who don't need it. The cooling design is efficient (you'll see later), but as a whole the 2170p just feels like a holdover.

It's strange; the HP EliteBook 2170p and the Acer Aspire V5-171 came in for review at right around the same time. I was optimistic about the EliteBook and skeptical about the Acer, but the more time I spent with each of these notebooks, the more positive I felt about the Acer and the less positive I felt about the 2170p. In terms of feel, the 2170p is by no means a bad design and I may be being needlessly harsh, but it just feels too thick. The awkwardly altered keyboard layout was an unwelcome surprise, and the internals don't seem like the most efficient use of the space available. Though the 2170p is light and sturdy, it nonetheless feels bulky in the hand, and not as portable as I'd like.