I've already gone over how Apple enables Retina support on OS X so I'll point you back to the 15-inch rMBP review for a deeper dive into everything Apple did here. In short, the 13's default configuration approximates a 1280 x 800 display but with 4x the number of pixels. All UI elements and things like Finder windows are the same size they would be if they were rendered on a 13.3-inch, 1280 x 800 panel, but they contain 4x the pixels (and thus look awesome). Images and other non-scaled objects are mapped 1-to-1 with panel resolution. This allows you to display a 2500 x 1400 image in actual size (1:1 mapping, without zooming out) while still having perfectly legible menus, icons and text. 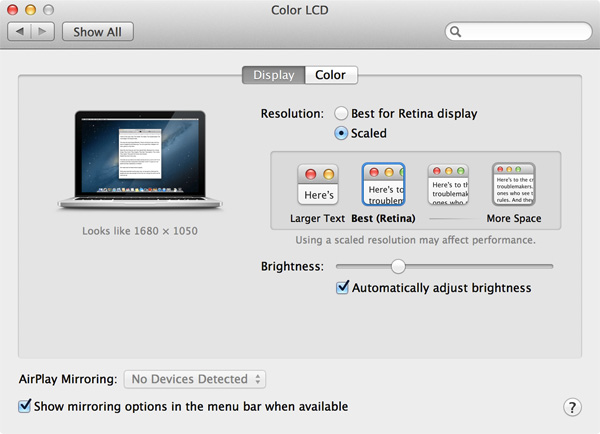 If you need additional desktop real estate, Apple provides two scaled resolution modes: 1440 x 900 and 1680 x 1050. At these resolutions, the desktop is rendered at 4x the scaled resolution (1440*2 x 900*2) and then scaled down to fit the 2560 x 1600 panel. Apple wrote its own scaling and filtering algorithms to maintain consistent quality across both Intel processor graphics and NVIDIA discrete graphics (15-inch rMBP). The added scaling and filtering work means there is a performance penalty to enabling these scaled modes, but in practice it's rarely that impactful. Also since you're performing a non-integer mapping of resolution to pixels on the downscale, there is some loss in quality but once again it's not hugely noticeable thanks to Apple's filtering algorithms.

Once again, UI elements, text, windows and icons are also rendered at 4x their size so everything remains legible, but things like images and videos remain unscaled allowing you to fit more content on your screen at the same time.

Similar to the 15-inch rMBP, Apple doesn't directly expose a native 2560 x 1600 setting although there are ways around that. 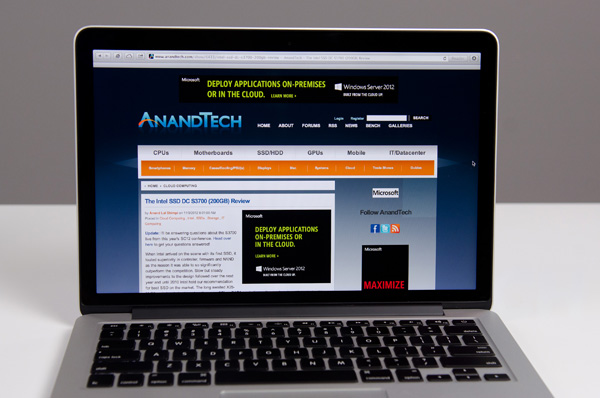 In using the 13-inch rMBP I found myself frequently switching between the native 1280 x 800 and two scaled modes. For basic web browsing or reading, the 1280 x 800 setting delivered the best overall experience. Everything was easily legible from a distance and quality was great thanks to 1:1 pixel mapping. The 1440 x 900 scaled setting was perfect for a combination of photo and typing work. Text was still large enough for me to comfortably see at a distance and the added desktop real estate made multitasking much better. Finally the 1680 x 1050 setting came in handy when I had a lot of applications open at once. It's easily the most impressive setting, but you have to have pretty good eyesight to be ok with doing a lot of reading/writing in this mode. 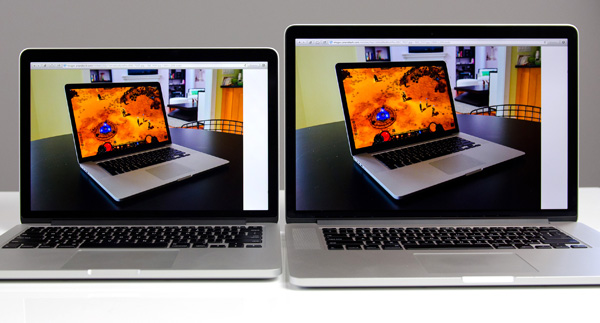 Non-permanent image retention has been a part of both rMBPs launched thus far. Keep any static image on the screen for a long enough time and you'll see a ghost of that image even after the screen has changed. Apple attributes the image retention issues to its use of IPS based LCDs in the rMBP, however the severity of image retention can vary depending on a lot of factors. I've personally seen image retention happen on both 13-inch and 15-inch Retina MacBook Pros. In my use, image retention was never a significant issue with either the 13 or 15-inch rMBP although I suspect how bothersome it is depends a lot on the user and usage model. There have been numerous reports of LG based Retina Displays behaving worse in the image retention department than Samsung sourced parts, however I don't have access to a large enough sample size of rMBPs to really validate those claims.