Trinity CPU Performance: The Good and the Bad

We're going to start our performance investigation a little out of order. The big question on everyone's mind is how much single threaded performance has improved over Bulldozer, and whether it's enough to actually make Trinity faster than Llano across the board. We'll use Cinebench 11.5 as it has both single and multithreaded test options: 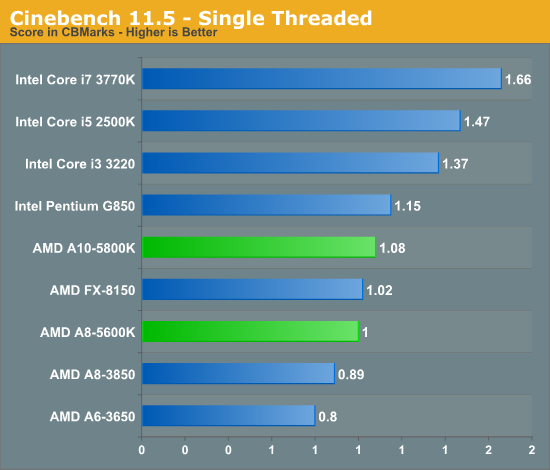 The good news is that single threaded performance is definitely up compared to Llano. Piledriver likely has some to do with this, but so does the fact that the A10 can run at up to 4.2GHz (~4GHz typically) with one of its cores active compared to the 2.9GHz clock speed of the A8-3850. Compared to the Bulldozer based FX-8150 there's a slight (~6%) increase in single threaded performance. Although I don't expect anyone will be cross shopping a Trinity APU and a FX CPU, it's important to keep an eye on progress here as we'll eventually get a high-end quad-module/eight-core Piledriver CPU.

Note that compared to even previous generation, low-end Intel CPUs without turbo there's a huge gap in single threaded performance. If we look at the gap AMD has to make up vs. Ivy Bridge it's not pretty. Intel's Core i3 3220 manages a 27% performance advantage over the A10-5800K. Even if Steamroller is able to deliver a 15% increase in performance at the same clock speed, there will still be a gap. And we're not even talking about how Haswell will grow this gap. For the foreseeable future I don't see AMD closing the single threaded performance gap. Jim Keller's job is to fix this problem, but it'll probably take 2 - 3 years to get there. 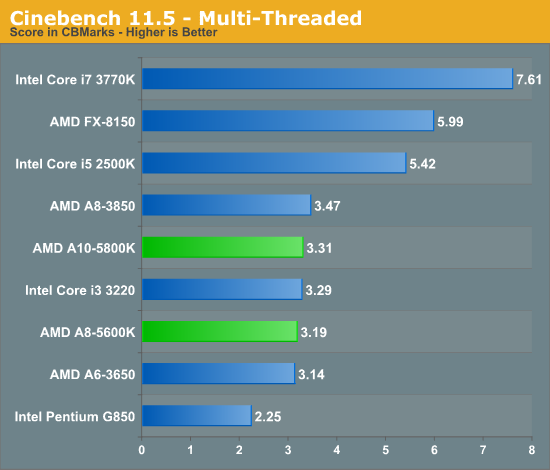 The multithreaded test shows the other end of reality: in heavily threaded foating point workloads it's possible that we'll see a regression compared to Llano. Remember the Bulldozer/Piledriver architecture prioritizes integer over floating point performance. Truth be told this regression is pretty rare in our tests, but until we get to Steamroller we will still see these types of situations.

Throw more threads at the problem and even with a floating point workload Intel can't pull ahead however. The A10 offers similar performance to the Core i3 3220 at a lower price. Your decision here would come down to the rest of the factors: single threaded performance, processor graphics performance, overclocking capabilities and power consumption. Intel and AMD both win two of those each, it's really a matter of what matters most to you. 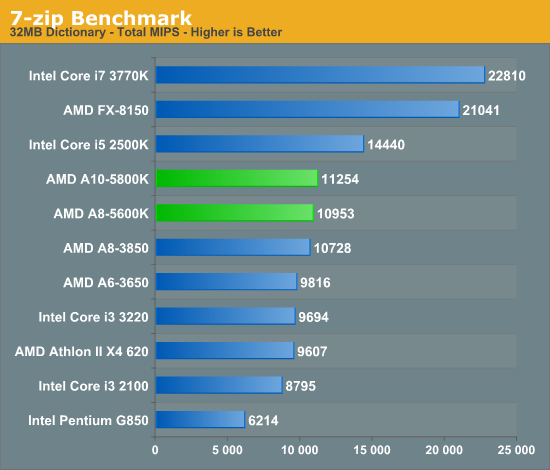 Here AMD manages a 16% performance advantage over the Core i3 3220. I'd even go as far as to say that Trinity would likely beat any dual-core Intel machine here. The performance advantage is somewhat artificial as Intel purposefully removes turbo from its dual-core desktop CPUs. This should be AMD's best foot forward, but once again it'll likely take Steamroller for this design to start to make sense.

Speaking of artificial product segmentation, one major feature Intel takes away when you get down to the dual-core desktop i3 level is AES-NI support. Hardware accelerated AES support is something that you get only with the more expensive Core i5/i7s. With Trinity, you get AES-NI support for the entire stack. The result is much better performance in those applications that depend on it: 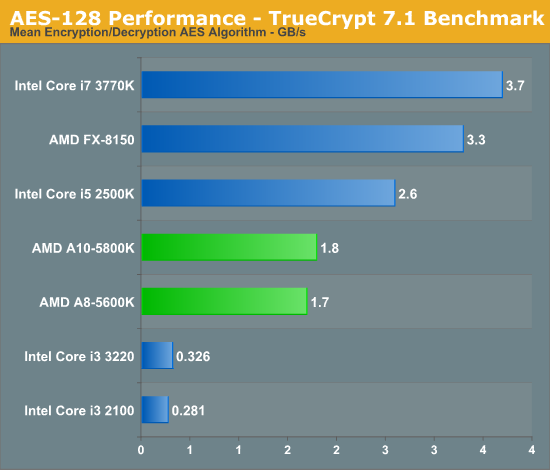 Like most of the advantages we've talked about thus far, there are really very specific use cases where Trinity makes sense over a similarly priced Intel CPU.