As explained in our review of the ASRock Z77 Extreme9, the ASRock graphical BIOS system has gone through some minor evolutionary changes since the inception at the beginning of P67.  On the X79 Extreme11 today, we see the next step in that evolution towards something a little more exciting to look at, as well as a reorganization of some menu options.

Regarding default settings, a couple of important points should be noted.  The BIOS by default gives the PCI Express lanes as Gen 2.0, rather than a method of auto detection.  Users of PCIe 3.0 graphics cards or PCIe devices should navigate to the North Bridge menu in order to set these lanes as Gen 3.0.  The BIOS should come with audio cues to allow the user notifications as well.  The final point is the memory – in our reviews of the X79 ROG range, those motherboards ran DDR3-2400 9-11-11 on our memory kit with a little bump in VTT and DRAM voltage.  Unfortunately the ASRock X79 Extreme11 could not do this – we ended up running the system at DDR3-2133 9-11-11, which had little negative affect on our benchmark suite.  It should also be noted that the current MultiCore Enhancement trend sweeping Z77 (and ASUS on X79) is not present here.

So the first thing to notice regarding the updated ASRock BIOS is the look – ASRock has added a space themed background, which provides better contrast than previous versions.  The icons on the top row have also changed, along with the addition of a ‘Tool’ option, which moves some features (System Browser, OMG, BIOS Update, Profiles) into an easier-to-use menu.

The main screen is slowly evolving into something we want as system builders and debuggers – we get the motherboard name, BIOS version, the CPU, the memory size and the current memory speeds.  All we need now are temperature readings as well as voltage information to make the screen more complete.  With the graphical BIOS scope at play, this information has the potential to be well presented.   On the main screen is also an option to change the active page on entry – this will be handy for overclockers wanting to change options in the BIOS over successive reboots. 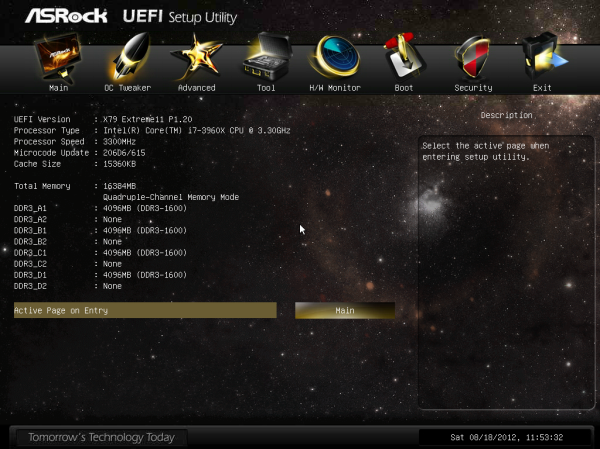 The overclocking action all happens in OC Tweaker, the next menu option on the top row. In OC Tweaker are the relevant CPU overclock settings – a series of automatic overclocks, manual choices with ratios, overvoltages, BCLK and Turbo Power Limits.  For memory we also have the option to enable XMP or a memory strap, a further sub-menu is available to adjust individual sub-timings.  CPU and memory voltages are dealt with in a separate menu at the bottom, along with load line calibration. 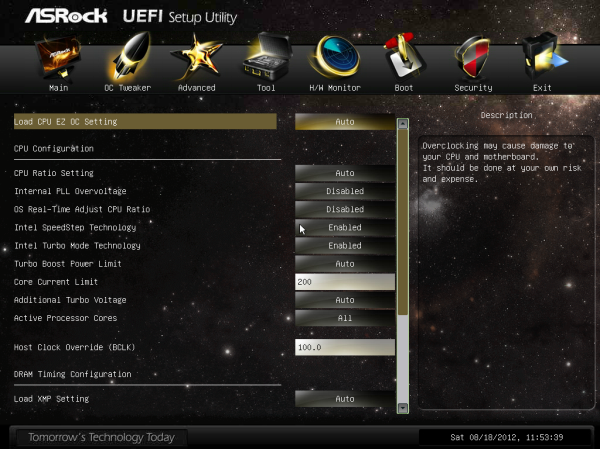 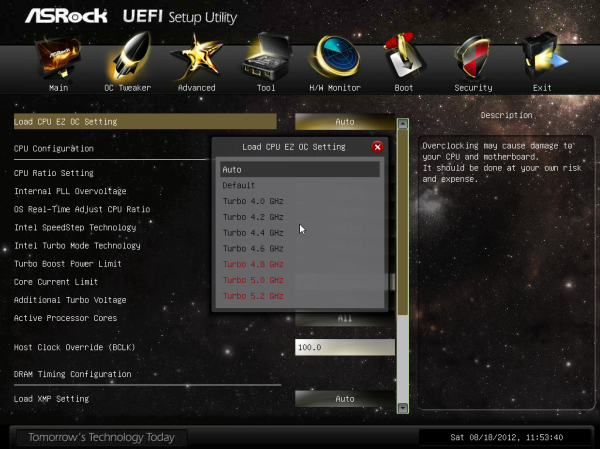 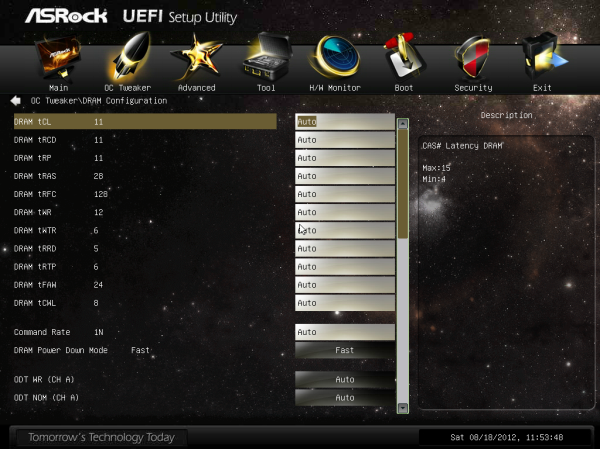 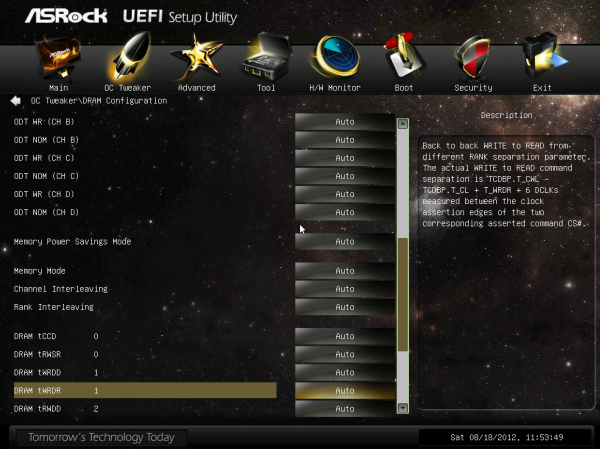 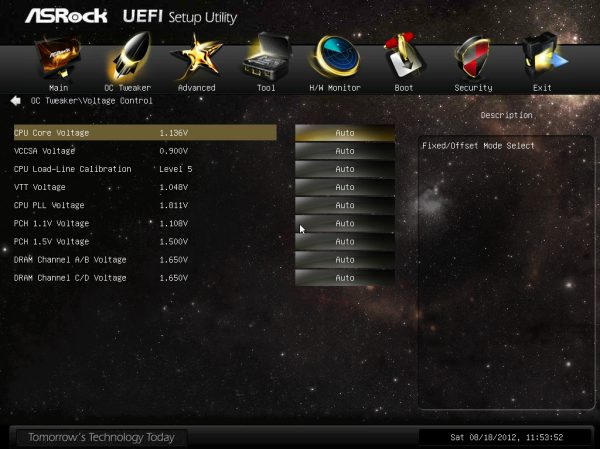 Overclocking on the X79 Extreme11 is discussed later in the review.

The new ‘Tool’ menu option leads us to all the newer features of ASRock BIOSes of late all under one heading.  This means we get the System Browser, a top down look similar to Gigabyte’s 3D BIOS which lets us know if hardware has been recognized at the BIOS level, Online Management Guard (to enable/disable network ports based on system time), the ability to flash the BIOS, RAID installation, and profile saving.  We have detailed these features in previous ASRock BIOS reports, but moving them under one menu makes a lot of sense. 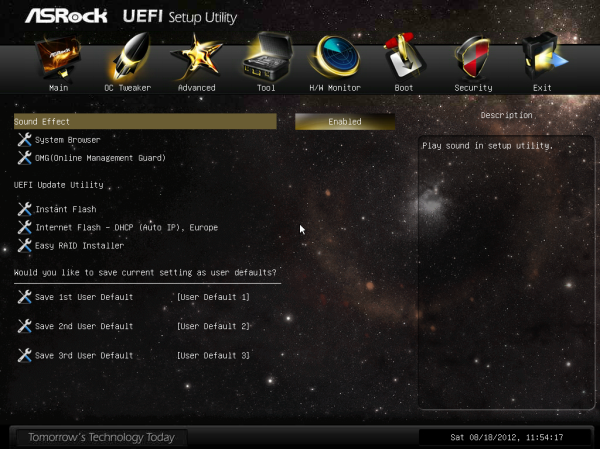 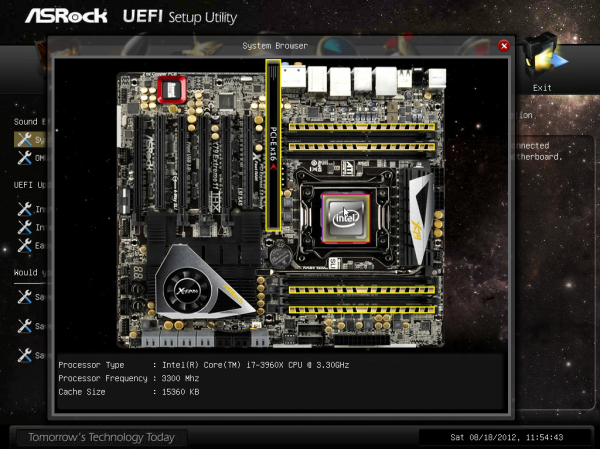 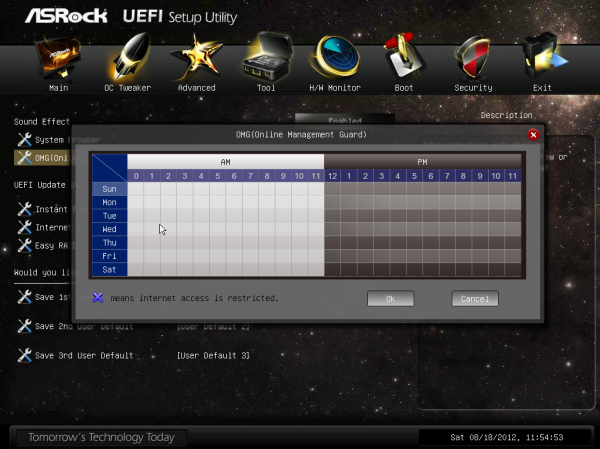 The H/W Monitor menu option shows the temperatures, fan speeds and voltages of the system.  As I mention repeatedly, it would be worth having a few of these readings on the first screen of the BIOS, just to aid a little in debugging.  Also in the H/W Monitor menu are our fan options. 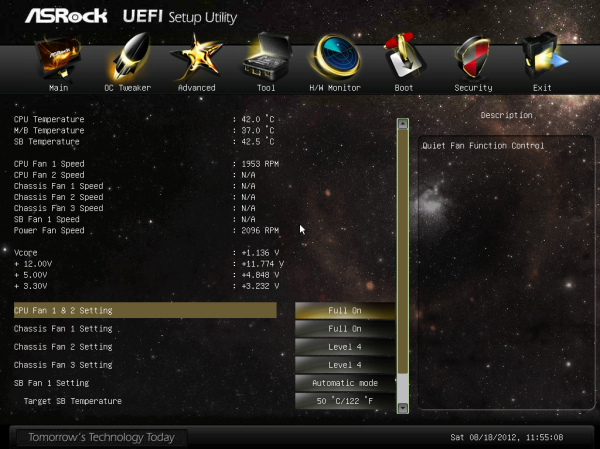 As with all ASRock boards of late, the main fan options allow for a target temperature and a ‘level’ in order to decide the slope of the ramp for fan speed against temperature.  All other fans are given only a level to choose from for their ramp.  There is plenty of scope to offer adaptive fan control if the motherboard manufacturers are willing to invest a little money and time into their fan controls – a lot is possible in software alone.