While there have been a few reasonably impressive Acer laptops over the years, most target a familiar refrain: deliver better performance at a lower price than the competition. Acer manages this quite thanks to their size (e.g. large buying power) and their willingness to compromise on certain aspects of the laptop experience. Their latest Aspire V3 series does come with several noteworthy updates compared to previous value offerings, however, and the price might just scare a few of their competitors into making some much-needed improvements.

Starting with the exterior overview, we find a throwback to some of the older style Acer laptops with a preponderance of glossy black plastic. Let’s be frank: I like glossy black plastic on a laptop about as much as I like letting my kids borrow my tablet after they’ve been eating chicken wings. I’m not sure if Acer actually did some research study that determined their customers actually like glossy plastic shells, but this one is about as bad as it gets on the lid and palm rest, and if you’re a bit OCD on such things you’ll find yourself constantly wiping away the inevitable fingerprints and smudges. The keyboard area at least gets a matte silver finish, which makes me wonder why they couldn’t have done the same for the rest of the laptop. (Probably because it didn’t photograph/render as well in the early design stages, and if so the people who made this decision need to clue in to the difference between marketing photos and actually using a laptop!) 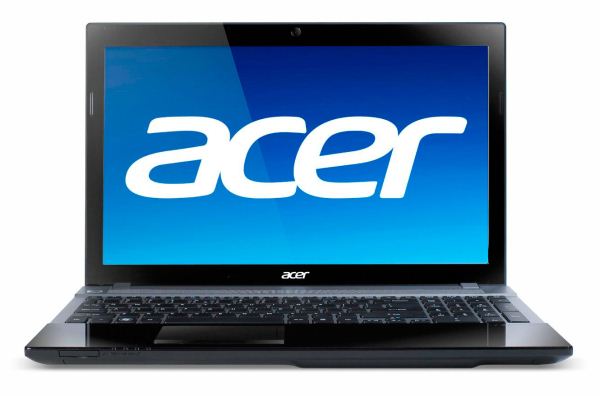 Naturally, the display is also glossy, but just about the only laptops delivering matte displays these days are business models—oh, and the ASUS N56VM/N56VZ that we really liked when we previewed Ivy Bridge. The casing of the laptop in general just feels a bit cheap, which is what you’d expect from plastic, but if you’re not the type that abuses their laptop by stuffing it into a backpack with some heavy textbooks, or occasionally dropping it, the V3-571G should hold up okay.

The one thing that Acer gets right is something near and dear to my heart, however: the keyboard. Gone are the horrible floating island keys, replaced instead by a conventional chiclet keyboard. It may not be the absolute best laptop keyboard in the world, but there’s little flex, key travel is decent, the spacing is right, and what’s more Acer seems to be one of the few companies that understands what a laptop 10-key is supposed to look like. There’s no silly half-size zero key, the plus, minus, etc. keys are all in the correct places, and for accountants or others that routinely input a lot of numbers the 10-key is exactly what it should be.

The only complaint I have is a minor one: the “merged” Enter and Backslash keys. We’ve seen this on a few Acer laptops in the past year, and I don’t know what purpose the non-gap layout serves, but for the most part it’s more of an aesthetic oddity than something that actually bothered me. I did a fair amount of typing on the V3 during the course of this review, and while I still prefer the key action on older ThinkPad and Latitude laptops, there's a lot of personal preference in what makes for a comfortable keyboard. At least the new key style doesn't make me want to cry.

For those interested in some shots of the internals, we did completely disassemble the V3-571G during testing (more on this later). Mostly, users might want to upgrade the RAM or storage, and that’s thankfully much easier than getting at the other components. Before continuing the discussion, let’s check out the full spec sheet to see exactly what hardware Acer delivers with the V3-571G-9435.

We’ll start with the good news: quad-core Ivy Bridge i7-3610QM comes standard, along with NVIDIA’s GT 640M Kepler GPU. That’s an awful lot of performance potential right there, especially considering the sub-$800 price. Back when AMD’s Trinity launched, I expressed concern about the target pricing we were hearing from AMD. At $700+ for laptops sporting the top-end A10-4600M APU, that left an awfully big gap in CPU performance compared to Intel’s Ivy Bridge. Acer has now successfully managed to put together a laptop with a significantly faster CPU and GPU for a price that’s not much higher than we’re seeing from many A10-4600M laptops. Thankfully for AMD, there are also companies like Toshiba selling 15.6” A10-4600M notebooks for under $700 ($660 at Amazon at the time of writing). Make no mistake, however: the i7-3610QM will run circles around the A10-4600M, and the GT 640M DDR3 will easily trounce the HD 7660G (though battery life is a different matter); we’ll have the full results in our benchmarks.

There are a few other nice hardware updates this round, including a dual-band 300Mb WiFi solution instead of the all-too-common 2.4GHz only 150Mb adapters. Bluetooth 4.0 is also present, along with Gigabit Ethernet, so at least Acer has everything covered on the networking front. And last but not least, like nearly all modern NVIDIA-equipped laptops, Acer supports NVIDIA’s Optimus Technology to enable dynamic switching between the Intel IGP and the discrete GPU. We finished our benchmarking with the original 295-series NVIDIA drivers, but the latest 304.48 beta drivers installed without a hitch (though spot-testing several games didn’t show any notable improvements in performance).

If that’s the good news, what’s the bad? For starters, there’s the LCD. Glossy isn’t the end of the world—some people actually like glossy panels—but the 1366x768 resolution for a 15.6” panel continues to be woefully inadequate. When companies like Apple are pushing the boundaries of what is possible with their Retina displays, and ASUS has 11.6” and 13.3” Ultrabooks with 1080p displays, 1366x768 needs to simply go away. Not surprisingly, the color quality and contrast on the LG panel are also mediocre at best. There are two other pretty significant shortcomings, but both are again a factor of the pricing. The Toshiba 500GB 5400RPM hard drive is pretty much bottom of the barrel as far as storage performance goes, and there’s no option for SSD caching available to lend a hand. The final complaint isn’t quite as egregious, but the 48Wh battery capacity is decidedly out of date compared to other 6-cell batteries. Couple all of this with the moderately large chassis size and we can’t help but feel disappointed.

I should also take a moment to discuss the softare loadout of the laptop. Like many OEMs, Acer stuffs all sorts of junk onto their machines. Some of it provides real value (e.g. a fully functional copy of CyberLink's Media Espresso video transcoding utility with support for Quick Sync), but much of the software is useless junk. It's not the hard drive space that's a problem with all these unwanted extras, but rather it's the toll they take on machine responsiveness and boot times--and I received an email from one user complaining about how the auto-update functionality for much of the software comes enabled by default and how it can hog a lot of bandwidth on an office network. Here's the list of software I uninstalled before I even bothered with starting testing:

Besides the above items that I felt were completely useless and had the potential to interfere with using the laptop, there are some other software packages that you might want to uninstall as well:

One hour or so later, with a few reboots, and we're finally at a Windows desktop without a bunch of other extras loading in the background. Don't forget to defrag the hard drive at this point, of course! And some people might like a few of the items in the above list (Evernote isn't all bad, some of the Acer utilities could prove useful, etc.)

Ah, but there’s still that price, isn’t there? If you’re not a stickler on such things as display quality, hard drive performance (you can always upgrade to an SSD on your own dime), greater than six hours of moderate use battery life, and you don’t mind a less durable/rigid plastic chassis, Acer’s performance is going to be tough—actually nearly impossible—to beat at this price point, at least until we see the next generation CPUs and GPUs come out. That’s still a ways off considering Ivy Bridge and Kepler just came out within the last couple of months. And with that out of the way, let’s see what Acer’s V3 value offering delivers in our performance metrics.