From a performance standpoint, the 2012 MBP lines up basically where we would expect it. My tester was the high-spec SKU with the same 2.6GHz i7-3720QM, 8GB of DDR3, and 1GB GT 650M as Anand’s Retina MacBook Pro evaluation unit, with the primary hardware difference being the 750GB mechanical hard drive in place of the Samsung PM830-based SSD in the rMBP. Performance matched up pretty close, with the MBP being just a tick behind the rMBP in most of our benchmark suite. And with the performance deltas we're talking about, it's really almost like splitting hairs. 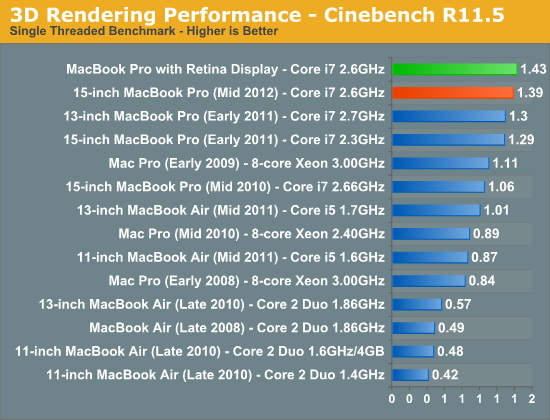 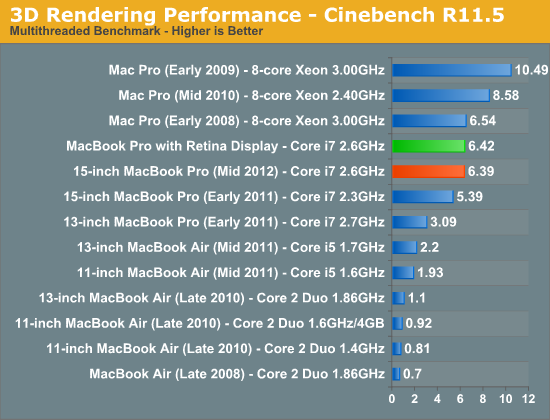 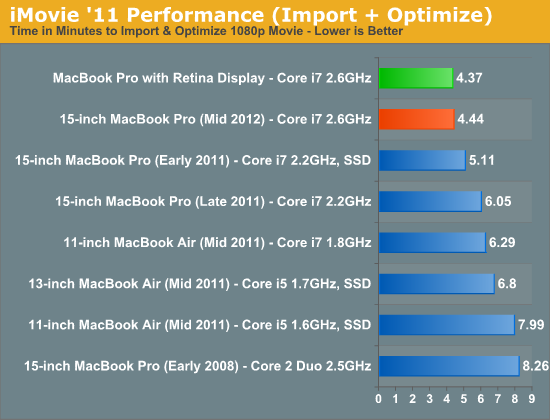 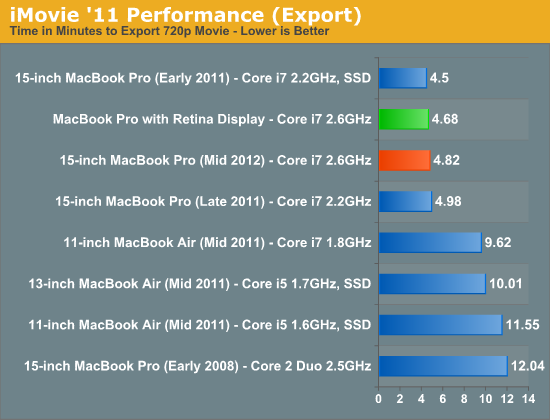 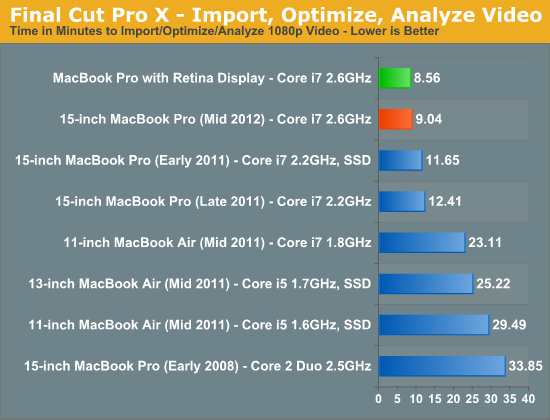 It appears that the i7's Turbo mode is less aggressive in the MBP versus the Retina, possibly due to the revised cooling system that the Retina model has. The 2012 MBP retains the same thermal design as the 2011 model, so it's unsurprising to see that Apple is being more cautious with it. 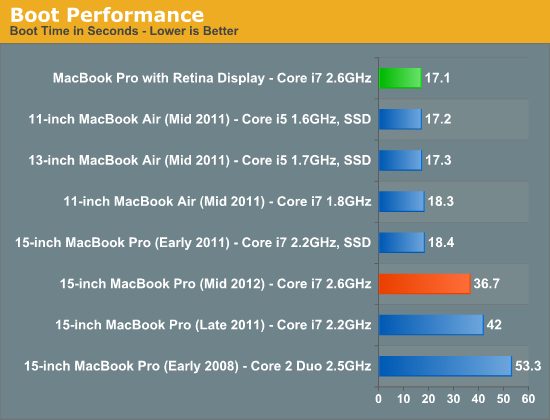 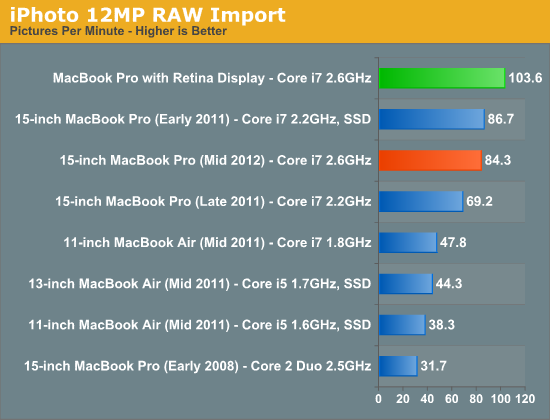 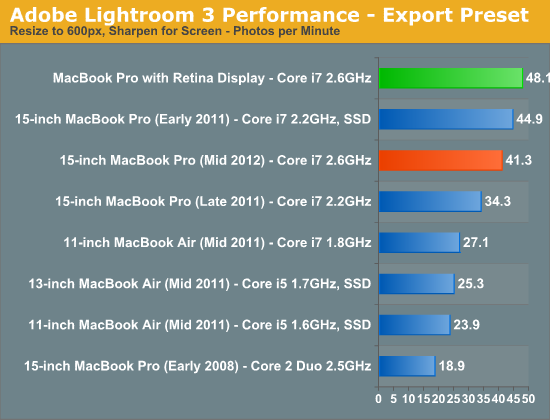 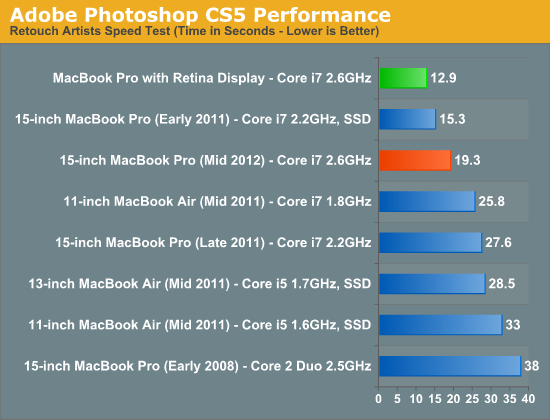 The SSD-based Retina obviously has faster boot times and performs significantly better in any disk-based activity. Based on my limited experiences with the Retina, it really feels substantially more responsive. Our usual recommendation from the last couple of years stands here too: if you're buying a new MacBook Pro, your first upgrade should be to add an SSD. 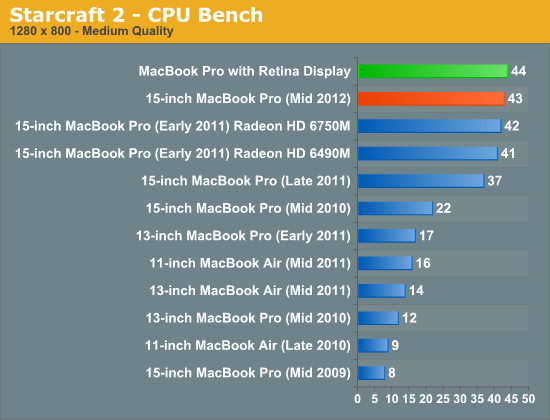 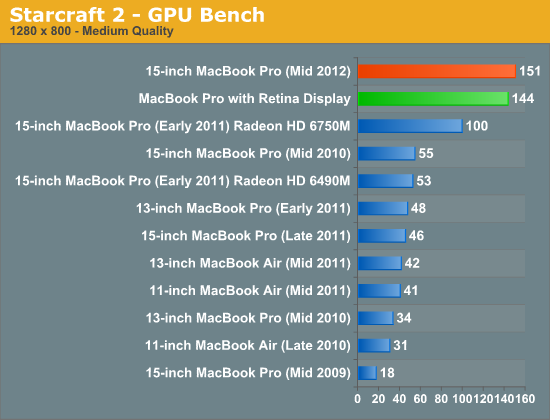 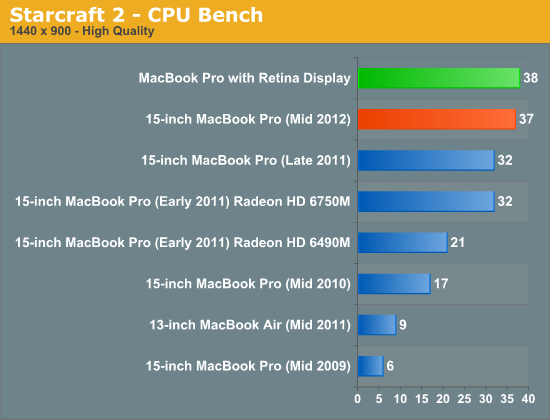 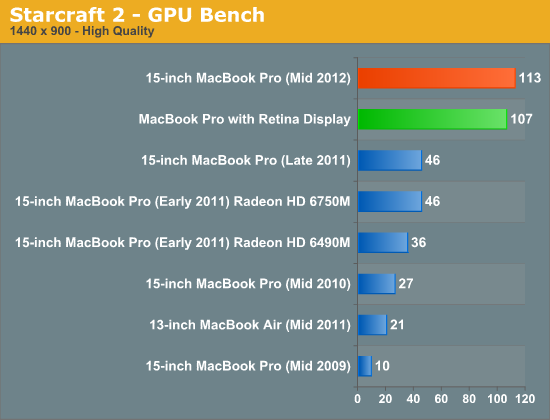 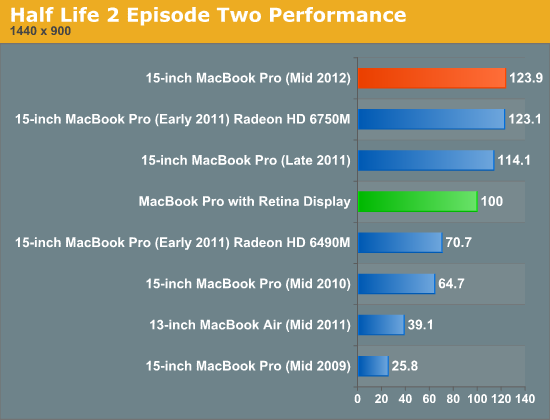 GPU performance is substantially improved over the 2011 MBP, with the GT 650M outpacing both the HD 6750 and 6770, to say nothing of the HD 6490 in the early 2011 Pro. We saw roughly equivalent performance with the rMBP again, with the MBP maintaining a slight edge over the Retina, but again with a margin of less than 5%. 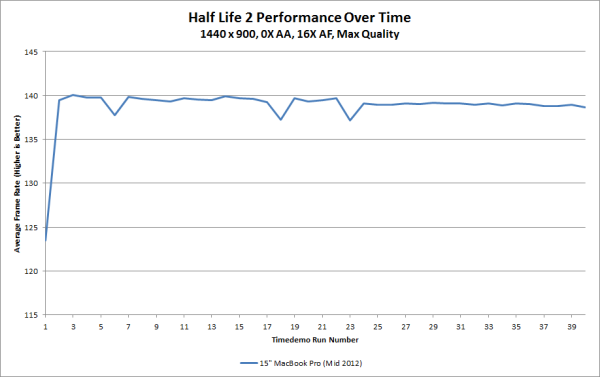 We took a look at performance over time, and as expected, Ivy Bridge and Kepler do a really good job of minimizing heat buildup over time and the corresponding amount of throttling that occurs. Through 40 runs of our Half-Life 2 test (at native res with maxed out settings), I ended up with nearly identical numbers the entire way through, with a very slight downward trend emerging (the delta between the average of runs 2 through 10 was a bit under 1% better than the average of runs 32 through 40). It's pretty much a flat line all the way across, the new chips really let the MBP run at significantly lower temperatures. Using it versus a Core 2 or SNB MacBook Pro, it noticeably doesn't get anywhere near as hot to the touch in day to day use. 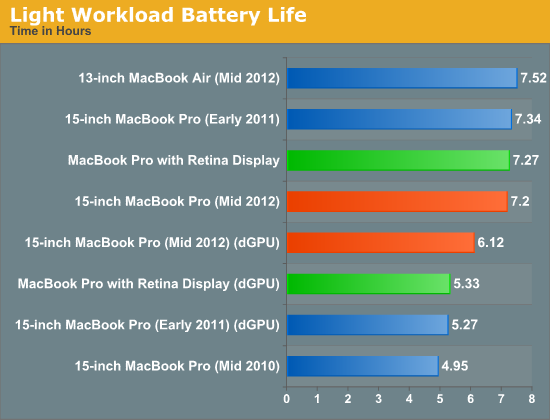 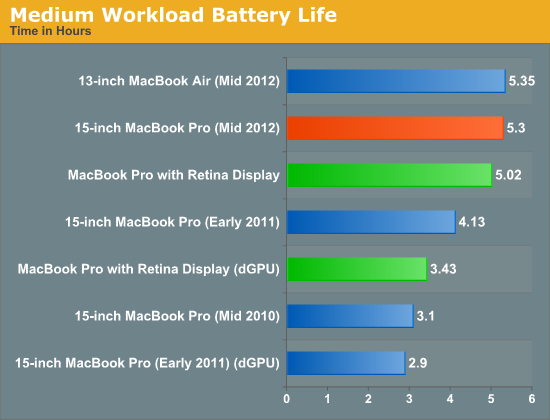 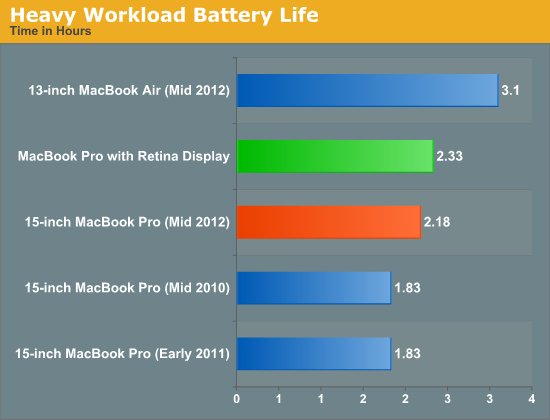 Battery life is pretty solid – we got a bit over 7 hours in our light web browsing test (with dynamic GPU switching on), a hair over 6 with dynamic GPU switching off (forcing the GPU to stay on), close to 5.5 hours in our medium-heavy browsing workload, and a bit over 2 hours in our brutal, heavy use case test (which adds a 1MB/s file transfer and a looping 1080p video to our heavy browsing test). Apple quotes 7 hours of “normal” use, and that’s about right based on my standard usage – if you use your notebook for light browsing and word processing with medium levels of brightness, you’ll get at least 7 hours if not a bit more. Obviously, once you start hitting the dGPU hard, it’ll die pretty quickly, but at least GPU efficiency has improved enough that just leaving the GPU on in light workloads doesn’t run down the battery too much.