Plextor as a brand has been around for quite a while, but most of our long-time readers are likely more familiar with the name as a purveyor of optical drives (especially 8-15 years back when optical drive performance actually mattered). For our younger audience, the name may be a relative unknown. However, Plextor is not a newcomer in the SSD market or component world in general.

Plextor’s history dates back almost a century as it is a subsidiary of Shinano Kenshi Corporation, which was founded in 1918. The actual Plextor brand was founded in 1990 and Plextor mainly manufactured optical disc drives in the 90s. (For a fun blast from the past, you can still find our old Plextor drive reviews.) Plextor’s product lineup has always been and is still heavily optical drive orientated but in March 2010, Plextor revealed their first SSD lineup: The PX-64M1s and PX-128M1S.

About a year later, Plextor released their second generation SSDs: the M2 Series. It was among the first consumer SATA 6Gb/s drives and was based on Marvell’s 88SS9174-BJP2 controller, which is the same controller used in Crucial RealSSD C300. Plextor is now on its third generation of SSDs and we finally have the chance to take a look at their M3 Series. 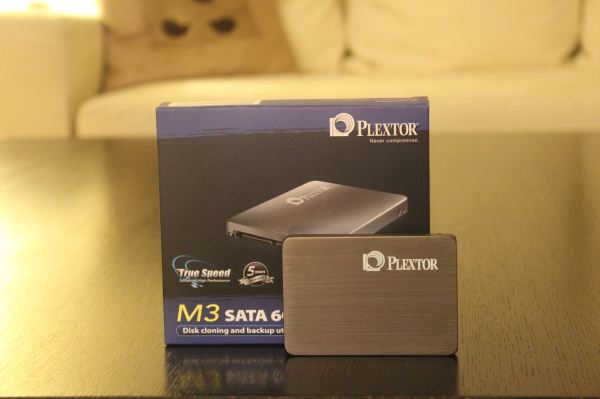 Before we go into the actual drive, let’s talk briefly about gaining popularity and generating revenue in the SSD world. There are essentially two ways for an SSD manufacturer to generate revenue. The first is to make a deal with a PC OEM and supply them with SSDs. This is a relatively safe way because OEMs rarely offer more than one or two SSD choices, so if a customer wants an SSD pre-installed, there is a good chance that the drive will be yours. Toshiba’s SSD business model is solely based on OEM sales for example, and having scored a good deal with Apple (they used to be the only supplier of SSDs for Macs, and still ship most of the SSDs used in Macs), they are selling millions of SSDs every year thanks to Apple’s success.

The downside of an OEM partnership is the difficulty of building one. If you look at the SSDs that OEMs offer, they are mostly made by Intel or Samsung. Reliability is far more important for PC OEMs than raw performance figures because when a consumer is buying a computer, he is buying the big picture and not a specific SSD. Nobody likes failures and it should be one of the OEM’s main goals to build a reliable machine to avoid a stained brand image.

Furthermore, Intel and Samsung are both fab owners and use their own proprietary controllers (except for Intel’s Series 520 SATA 6Gb/s SSDs, but the firmware is still custom). Owning a fab means you have total control over what you produce and sell, and also know what to expect in terms of yields. If there is a problem in production, you can focus the available NAND on your own SSD products and ship the leftovers to others. That guarantees a fairly stable supply of SSDs, while fab-less SSD makers are at the mercy of NAND manufacturers and their supply can fluctuate a lot.

Using custom firmware, and especially an in-house controller, removes additional overhead that is produced by a third party controller and firmware. If you go with a drive that uses a third party controller and firmware, when an issue arises you first report it to the manufacturer of the drive, who then reports it to the maker of the controller and/or firmware, and then there's a delay while you wait for the problem to be fixed. SandForce in particularly cannot be praised for the quickness of their firmware updates in the past, and hence it’s a safer bet for PC OEMs to go with a manufacturer who also designs the firmware as it’s easier to work out potential issues that might crop up.

If you can’t establish a relationship with a PC OEM, then you are left with selling SSDs through retailers. This is what most SSD OEMs do and some do it along with OEM sales. The retail market greatly differs from the OEM market. Your SSD is no longer part of the whole product—it is the whole product. That means your SSD has to sell itself. The best way is obviously to have a high performance yet reasonably priced SSD, as that is what buyers will see when buying a product. Reliability is another big concern but it's something you can't really use as a marketing tool because there aren't any extensive, unbiased studies.

The positive side is that if you have an SSD that is very competitive, it will also sell. In the OEM market, you may not get a lot sales if the end-product isn't competitive. Take for example the Razer Blade that we just reviewed. It uses Plextor's M2 SSD (see why I picked the Blade now? Note however that our review sample was an earlier unit that used a Lite-On SSD) but as we mentioned in our review, the Blade is too expensive for what you get. Plextor will of course get some SSD sales through Razer but due to the small niche of the Blade, it's not a gold mine.

As far as brand awareness for Plextor, I believe the reason for their relative obscurity of late has been the lack of media awareness and contacts. Their journey to become an SSD manufacturer has been rather abnormal. When you think of the history of other SSD manufacturers, they were mostly known for RAM before entering the SSD world. Being in the RAM market acts as a shortcut because you are likely to have relations with the media that are interested in your products, plus there is a good chance that people are already familiar with your brand. For optical drive manufacturers, the case is the opposite.

These days, optical drives aren’t tested and benchmarked as much as other components; it’s not a component where people pay a lot attention when building a computer. When most people don’t really care what you are making, it’s tough to create media contacts and build brand image. Coming up with a new product line won’t solve the problem overnight but give it some time and it may. This is essentially what has happened to Plextor—it has taken a few generations of SSDs before consumers and media started recognizing the new player in the game—and now it’s time for us to take a look at what they have been holding in their sleeves.