For a while now, our chief complaint when talking about 4G LTE handsets has been battery life. The combination of 45nm cellular basebands, ever increasing screen size, and 4x nm SoCs has been unforgiving in the power department. Handset manufacturers are always engaged in a difficult balancing act between device size, price, and the resulting battery life. Too big of a battery and you’ve created a brick that looks unattractive next to other svelte phones, too small and you’ve created something that looks great but needs to be tethered to the wall all day. 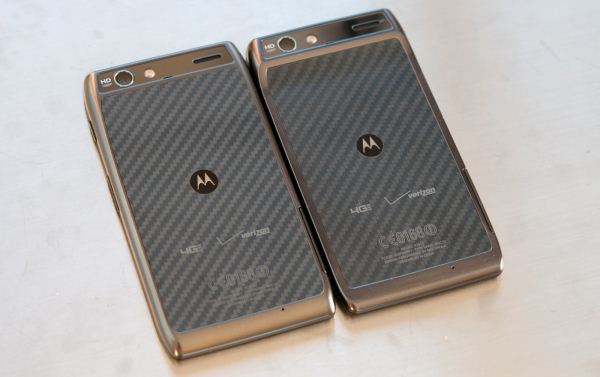 We’ve already reviewed the Motorola Droid RAZR, which itself is a close cousin of the Motorola Droid Bionic. As a result, we’re not going to go into super depth with the MAXX since it would be a 1:1 repeat in basically every part to what we talked about in the RAZR review already. The RAZR MAXX and RAZR are quite literally the exact same device (PCB, display, cellular basebands, camera, etc.) with the exception of battery and exterior case.

The two share the same model number (XT912), FCC-ID (IHDP56ME1), and run the same software. Motorola has talked about reducing the number of devices released yearly and consolidating down to just a few flagships, and though it’s easy to claim otherwise, the RAZR and RAZR MAXX don’t really confuse things that much since, again, they’re really the same phone with a different case and battery. The result of that similarity is that from a software and carrier testing perspective, delivering updates to one means delivering updates to the other, something we’ve already seen turn out to be the case with the recent 6.12.173 update.

What’s changed with the MAXX incantation is its battery, which is significantly larger. It seems as though Motorola has been feeling nostalgic about some of its old brands lately, reviving first the RAZR brand, and now the “MAXX” brand in the form of a moniker (anyone else remember the MOTORAZR MAXX?). In this case, what’s MAXX about the RAZR MAXX is its battery, which is 1.88 times the size of the RAZR battery. (As an aside, I can’t help but think of the Rage Fury MAXX every time I type MAXX)

The MAXX also continues use of Motorola’s higher voltage Li-ion chemistry, which is 3.8V nominal as opposed to the standard 3.7V nominal voltage. Motorola continues to use this higher voltage chemistry on a majority of its new devices. As I talked about in the Bionic and RAZR reviews, this means you can’t directly compare mAh, instead watt-hours is better for comparison purposes here. We’ve been careful about using Whr, and I only think in Whr anymore, which finally paid off with this jump to a higher voltage.

Against the competition, the RAZR MAXX battery is positively huge, and is larger than the Bionic’s extended battery which itself was a hefty 10.2 Whr. The battery remains sealed inside and not easily replaceable, but given its size this is a totally acceptable trade-off. That’s really where the MAXX makes sense - if you’re going to sacrifice battery access and replaceability, it should be absolutely beyond a doubt big enough to make it through at least one day’s worth of constant abuse.

The MAXX does put on some weight and get heftier in the midsection as a result, but the phone is still remarkably thin. What’s interesting is that although the RAZR MAXX is thicker than the RAZR at its thinnest point, the two phones’ thickest points are still the same. I guess that really illustrates what’s wrong with the way that OEMs are specifying device “thickness” these days more than anything, as most intentionally cite the device thickness at its thinnest point. One other OEM has told me it’s going to move to a mean thickness measurement, which seems to be more representative but potentially complicated. Personally, giving min and max seems to be the most honest disclosure, and again on the MAXX only the thinnest point gets thicker. Mass goes up 17 grams, just 13% over the RAZR.

In the hand, I find the MAXX to unsurprisingly feel very similar to the RAZR. The thickness change is obviously perceptible, but not a big deal. The RAZR remains a thin, flat device, and adding 2 mm at the thinnest point honestly doesn’t change the way that things feel to me. In the pocket, I think you’d have a hard time feeling the difference between the RAZR and the RAZR MAXX - neither print very much in a pair of jeans or dress slacks.

Interestingly enough the most notable change between the RAZR and the RAZR MAXX is that the two don’t lie flat the same way back down on a table. The RAZR tilts slightly thanks to that thickness difference, the RAZR MAXX is very close to being completely coplanar with the surface it’s resting on. The backside still has the slightly rubberized Kevlar material, though the curve at the top isn’t nearly as small. The microSD and microSIM door at the side gets a bit taller as well.

The RAZR MAXX is probably the first time I’ve seen a device offer a significantly larger battery without it being an obvious afterthought. The traditional extended battery upgrade path usually involves getting a new battery door with a huge, obvious, awkward bulge. Almost every single time, that battery door either doesn’t match or fit properly, or it’s just an awkward afterthought. The other upgrade option is usually a battery with the same volume but slightly more capacity. The MAXX is neither - a device with a notably bigger battery that doesn’t make all the concessions that normally accompany such an upgrade.