In the last year or so, three major SoC manufacturers vied for market share in the media streamer market. While Intel's CE41xx took the high end path with design wins in the Logitech Revue and Boxee Box, Sigma Designs and Realtek continued to retain design wins with their existing customers. Sigma's customers used SMP 8642/8643/8655 while Realtek customers migrated from RTD 1073 / RTD 1283 to RTD 1185. We have had media streamers based on these SoCs in-house for quite some time now. Almost all of them have been touched upon in one piece or the other. However, a comprehensive comparison piece was never published.

Today, we will summarize the media streaming capabilities of some of the media streamers which vied for consumer attention over the last 1 year. Representing Sigma's platform is the Netgear NeoTV 550 (based on the SMP 8642). From the Realtek side, we have the A.C.Ryan PlayOn!HD2 based on the RTD 1185. In our original Boxee Box review, we had indicated that a second look would be coming soon. We will see whether firmware updates have improved the capabilities of the Boxee Box since we last looked at it. 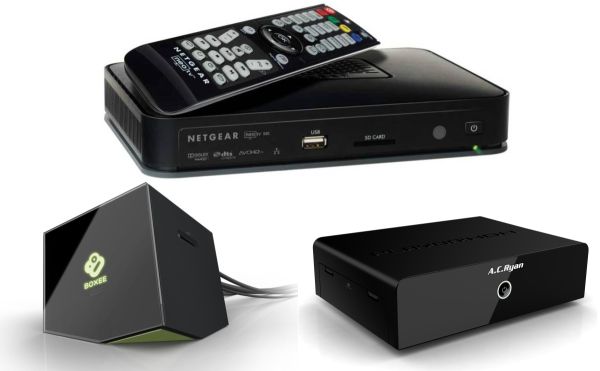 With Intel exiting the media streamer market, only Sigma Designs and Realtek have introduced SoC updates for their customers. Sigma Designs adopted a three-pronged approach, introducing one set of SoCs for the premium Blu-ray player market (SMP 8646/8647), another for IP set top boxes / OTT media players (SMP 8670/8671) and yet another one for the premium media players sans Blu-ray capabilities (SMP 8656/8657). Realtek delivered just one updated SoC, namely, the RTD 1186 which added Blu-ray 3D capabilities without the BDA certification hassles. Starting last month, devices based on the updated SoCs have also started appearing. In this situation, it is conceivable that the last gen models are going to be available at attractive prices in the coming months. This review should be able to serve as a guide for your purchase of one of those models.

Starting with this review, we are streamlining the presentation of our test suite results. In the first two sections, we will discuss hardware impressions (including build quality) and the user interface / jukebox capabilities. The bulk of our test suite results will be presented in the following five sections. An overview of the streaming services available will also be presented. Miscellaneous issues such as networking capabilities and power consumption profile will be covered in the final section.