Toshiba's Qosmio Goes on a Diet

The first thing I noticed about the refreshed Toshiba Qosmio is that it's not insanely enormous like its predecessors were. The Qosmio X775 has shed a lot of weight from the last generation and lost an inch off of the screen. The result: it's nearly four pounds lighter! Most of the extreme gloss is gone, replaced by textured glossy surfaces that at least don't pick up fingerprints, and a sort of "Coca-Cola Can" red-and-gray coloration has taken over for the black-and-red of prior models.

What you'll notice just starting from the lid is the "Fusion X2 Finish" that's a glossy plastic heavily textured enough to not be prone to fingerprints. The two-toned red and gray is different and liable to strike some users well and others not so much, but I think we can all agree it's a massive improvement from the last generation. The shell also feels much less bulbous than before and indeed, it's a bit more akin to the design of the new Tecra R850 than the other consumer notebooks in Toshiba's lineup.

That comparison holds up when you open the Qosmio X775. The keyboard isn't the irritating glossy flat-style keyboard that the other consumer Toshibas have; it's again that chiclet style from the Tecra and Portege. This time, though, it's backlit a sinister red in line with the rest of the backlighting on the system. I'm a fan of the coloring and it makes the most sense when the Qosmio is open, where the red-into-gray gradient appears again above the keyboard. My only complaint there is that the keyboard backlight just doesn't stay on long enough, at least by default. The rest of the inside is textured the same way as the lid.

Of course there's a glossy black bezel around the screen, and I think this is because Toshiba engineers knew I'd be reviewing the Qosmio. The nicest thing I can say here is that it doesn't look out of place compared to the rest of the notebook, but I'll counter that by saying Toshiba needs to just get rid of the gloss. I've said it before and it bears repeating: no more gloss. The other vendors have largely moved away from it, Toshiba; it's time for you to follow suit. 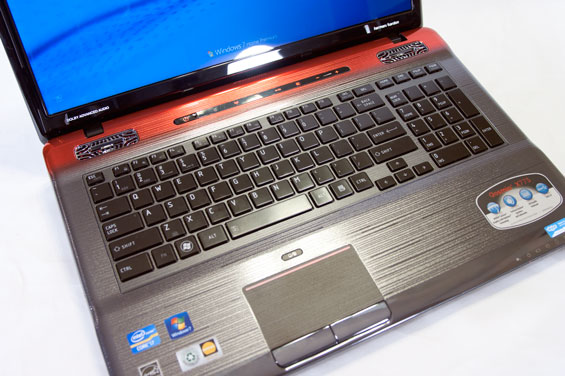 I do wish the keys in the keyboard were a matte plastic, but given their contours and the overall shape of the keyboard I'm not too bothered by it. On the flipside, Toshiba continues to have one of the smartest keyboard layouts in the industry, with a fully standardized 10-key and every key you'd need accounted for in a smart place. The touchpad is also very easy to use and I had no trouble with it, though the action on the mouse buttons is just a little bit stiff.

The big takeaway with the new Qosmio is that as a gaming notebook, it competes squarely against the other 17.3" monsters in the market where before it was just a massive desktop replacement. Shedding a third of its girth while maintaining performance was a big win for Toshiba; I just wish their styling would be less ostentatious.

AT Deals: MSI Katana GF66 Laptop Now $1250 at Walmart AT Deals: Razer Huntsman V2 TKL Keyboard Down to $90 at Amazon