With just a day left in April, AT&T made good on its promise to enable HSUPA for its two newest HSPA+ enabled smartphones, the Motorola Atrix and HTC Inspire 4G, before month's end. The two phones originally shipped with HSUPA disabled. As a result upstream throughput was capped at WCDMA rates of 384 kilobits/sec instead of much higher upstream throughput possible with both phones celluar basebands.

The HTC Inspire 4G uses a Qualcomm MSM8255 SoC with a bulit in cellular modem that supports HSPA+ 14.4 Mbps down, 5.76 Mbps up. The Motorola Atrix 4G uses a Tegra 2 SoC and an external Qualcomm MDM6600 which also supports the same HSPA+ rates of 14.4 Mbps down 5.76 Mbps up. In most AT&T markets upstream speeds of around 1.5 Mbps are possible with HSUPA enabled. 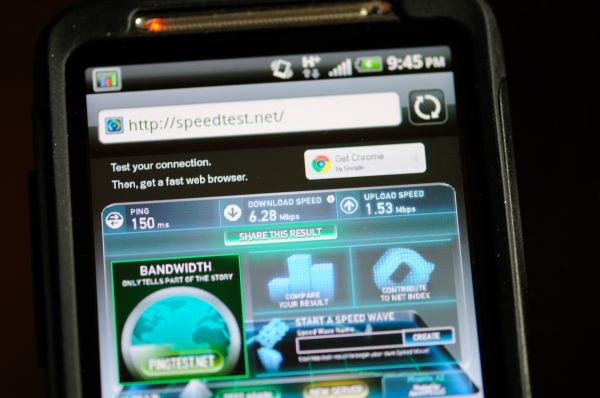 The updates bring a few other software improvements beyond enabling HSUPA. On the Atrix, Android is updated to 2.2.2, WiFi hotspots can be created on EDGE, and Yahoo email can be synchronized over WiFi. On the Inspire 4G, email account creation settings are updated and simplified, though unfortunately Android remains at 2.2.1 on the handset. Changelogs for both the Inspire and Atrix can be found at the respective links.

Anand reviewed the Atrix 4G a while back, and I purchased outright an HTC Inspire 4G both to review and use as a daily driver to replace my aging Nexus One. For a while now, enabling HSUPA on the Inspire 4G merely involved editing build.prop if you had root, and likewise XDA Devs enabled HSUPA on the Atrix a few days ago. I've been patiently waiting for HSUPA to be enabled on the official Inspire 4G ROM before diving into a review, since not having HSUPA in the stock ROM has been a major drawback.

I updated the Inspire 4G this morning and immediately set out doing some drive testing to determine what all has changed. My market has been HSPA+ (3GPP release 7) enabled for some time now, which I verified using some AT commands on a Sierra Aircard 308 a few months ago. In addition, I've seen upstream speeds of around 1.5 Mbps on countless devices.

After the update I originally could not get upstream speeds above the 384 kbps WCDMA rate on the Inspire 4G. After tinkering, I was able to get HSUPA speeds after a factory data reset and a number of battery pulls.  I've seen mixed reports in forums with people having immediate success and some hesitation similar to what I experienced.

My original intention was to show before and after speeds on the Inspire to illustrate the difference. Unfortunately, in my haste to figure out why I couldn't get any HSUPA, I nuked my tests from before the update with the factory reset. Having HSUPA enabled has not only improved upstream speeds, it also has improved how fast downstream throughput scales. I'm not sure whether the offical buld.prop also has changed the HSDPA category, but downstream is likewise noticeably faster. What's curious about the HTC Inspire is how bimodal upstream throughput seems to be. See for yourself in the graphs. I've run 169 tests on the Inspire today all over my local market of Tucson, AZ and generated some plots. 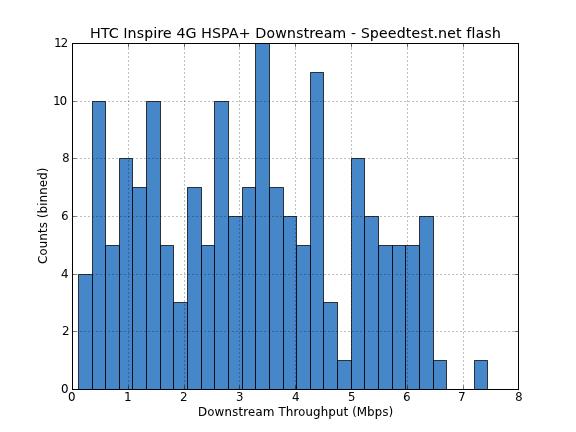 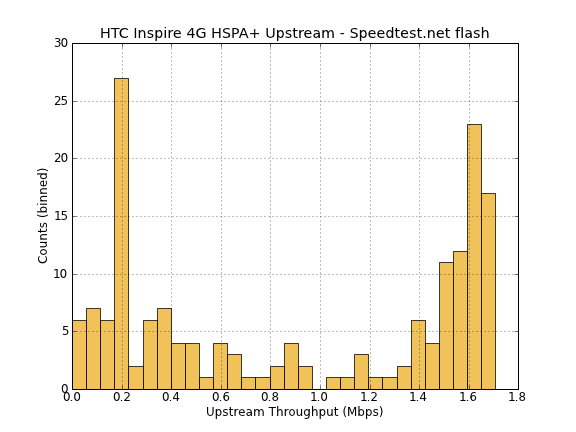 It's easy to see that upstream speeds are much improved on the Inspire. What's puzzling again is that there's a clear double distribution going on, with one cluster of results centered around the WCDMA upstream rate of 384 kbps, and another around the much more typical 1.5 Mbps upstream throughput I see on virtually every other 3G handset I've used on AT&T. It almost seemed like every other test I ran would alternate between upstream throughput of 1.5 Mbps, and then 384 kbps, even in the same position. I took some photos of the Inspire 4G showing this behavior just a minute apart in an area with very good AT&T signal. 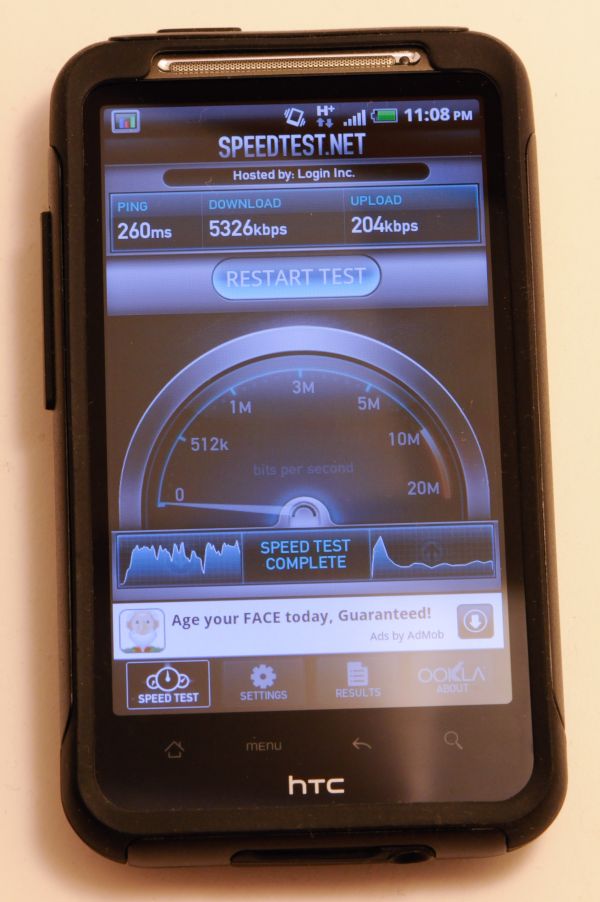 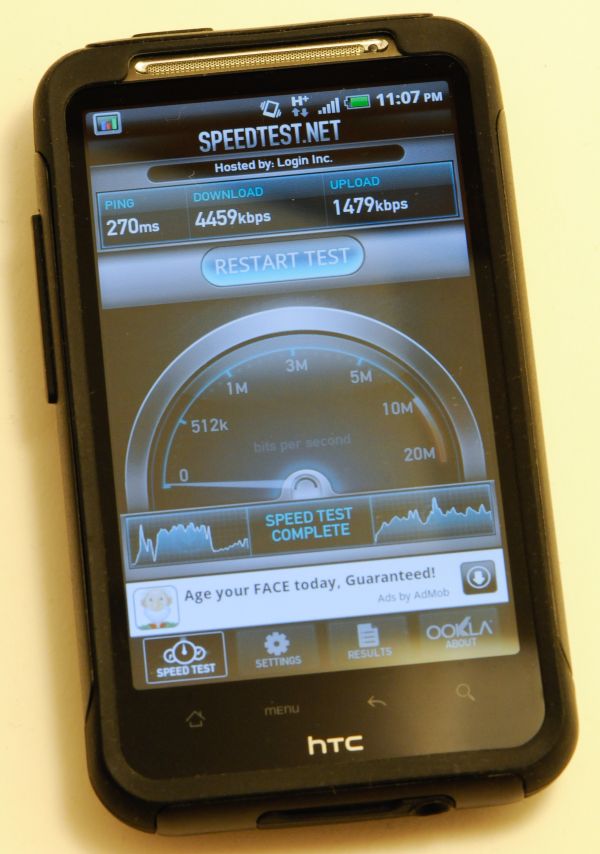 HSUPA is definitely enabled, however it seems that there's some other shaping going on which will toss the phone back on just WCDMA for upstream occasionally. I haven't seen this off and on behavior on any other AT&T handset in this market yet. Finally, downstream throughput now occasionally peaks all the way up to over 6 Mbps. It still isn't as fast as LTE's 10 - 20 Mbps, but it's also not bad.

For comparison, you can see the iPhone 4's throughput profile from the last 100 or so tests I've run over the course of months. The iPhone 4's baseband is an Infineon X-Gold 618 with HSDPA 7.2 and HSUPA 5.76 support, and isn't HSPA+ enabled. 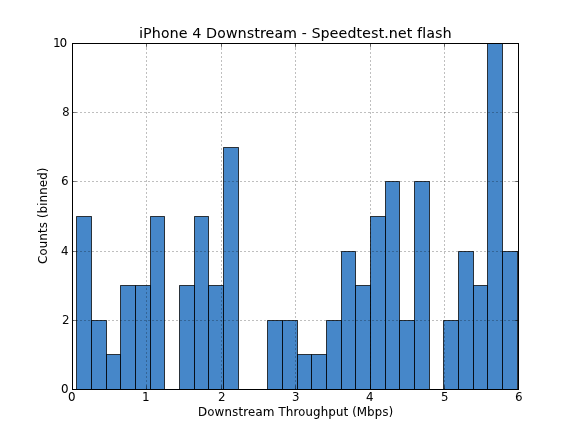 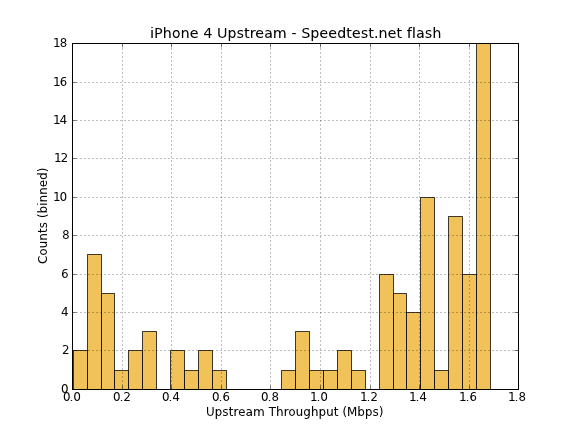 It's nice that AT&T has updated both the Atrix and Inspire to support the full potential of each's cellular modem, though it took a few months. It will also be interesting to see whether upstream speeds fall below the relatively regular 1.5 Mbps I've become accustomed to seeing on everything from the iPhone 4 to Nexus One.