If you just look at the model number, you might get the idea that the GeForce GT 540M is a significant upgrade from the other GT 420M found in the original XPS 15. Unfortunately, that’s the problem with model numbers; the reality is the only key differences are in clock speeds (and power requirements). Both the GT 420M and the GT 540M sport the same 96 CUDA cores and a 128-bit DDR3 memory interface; however, the GT 420M comes clocked at 500/1000MHz on the core/shaders while the GT 540M sports a 672/1344MHz clock. The memory also runs at 900MHz instead of 800MHz. The result is up to 34% faster computational performance but only 12.5% more memory bandwidth. That means in practice the L502x should beat the L501x by 10 to 35% in gaming performance, depending on where the bottleneck happens to lie—though it could be higher on games that depend more on the CPU.

Here are the full results at our low, medium, and high default settings. Twenty-four graphs for your viewing pleasure; please, take your time. 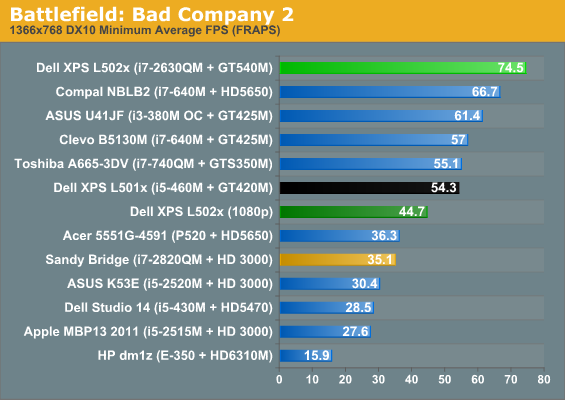 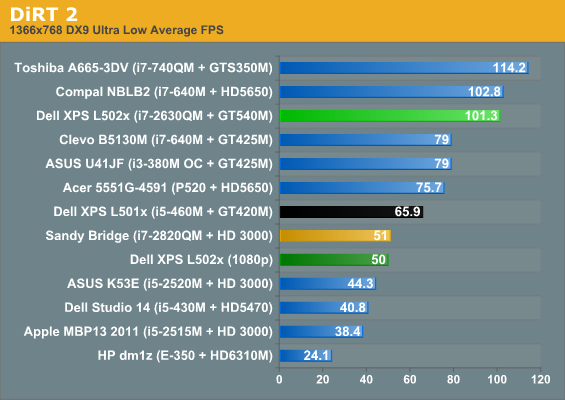 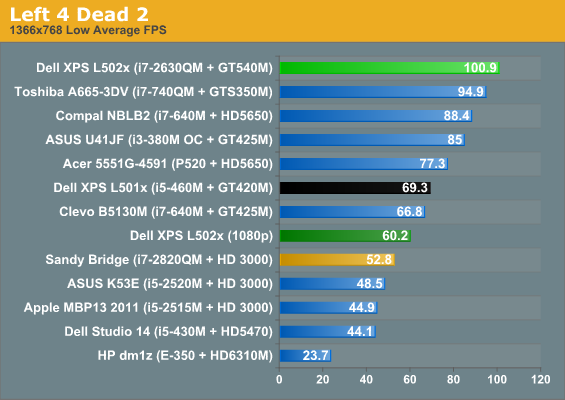 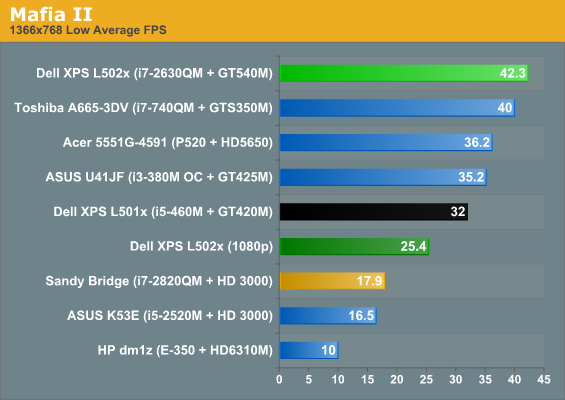 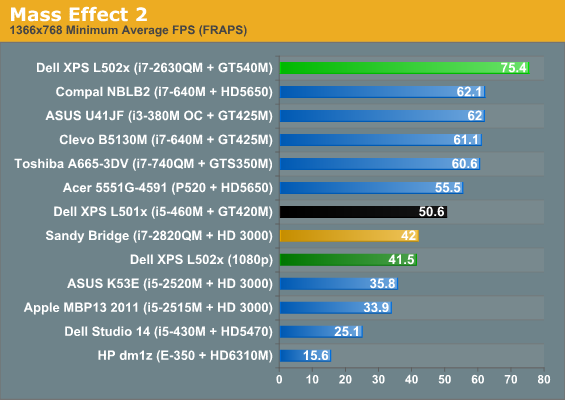 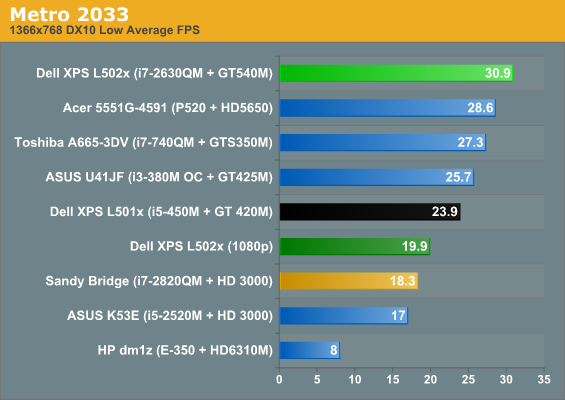 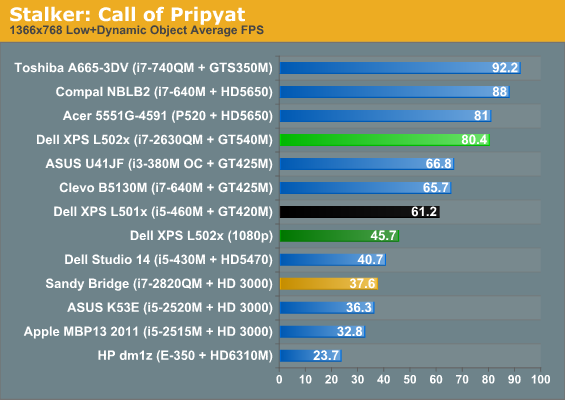 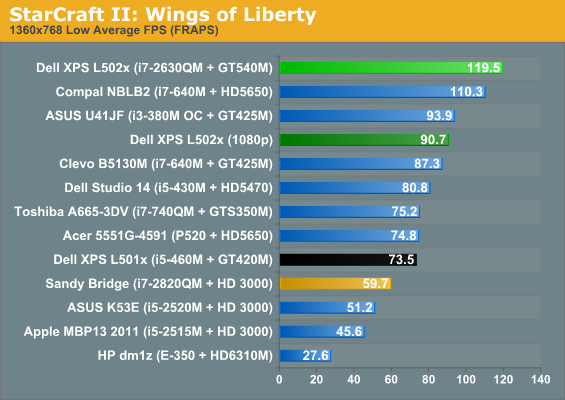 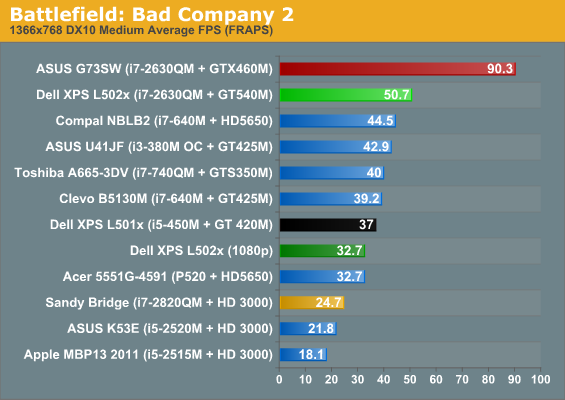 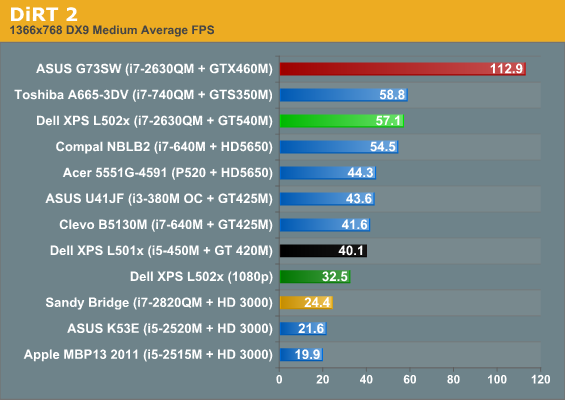 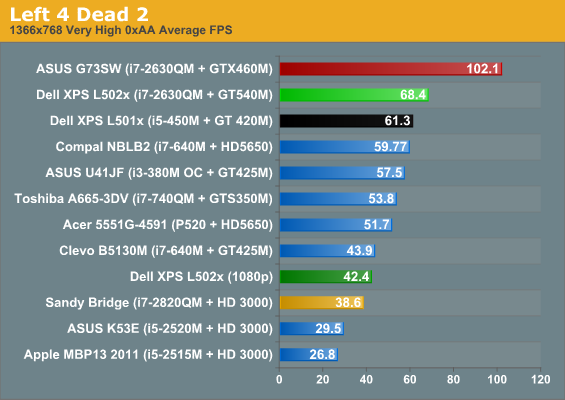 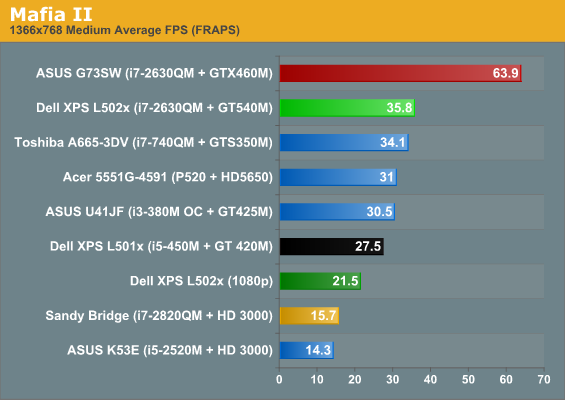 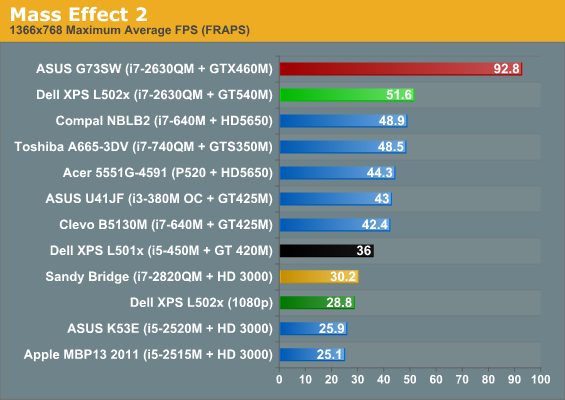 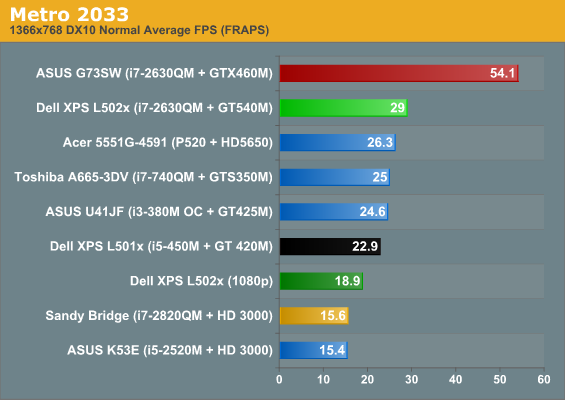 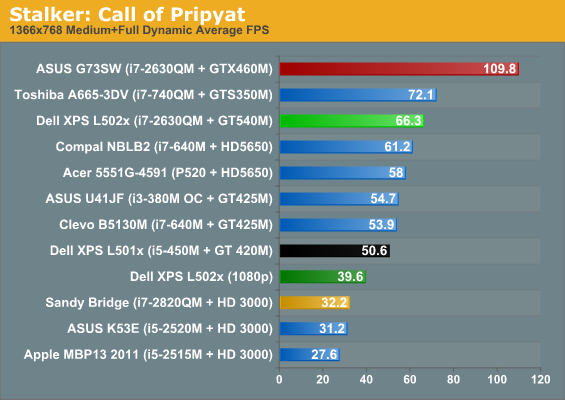 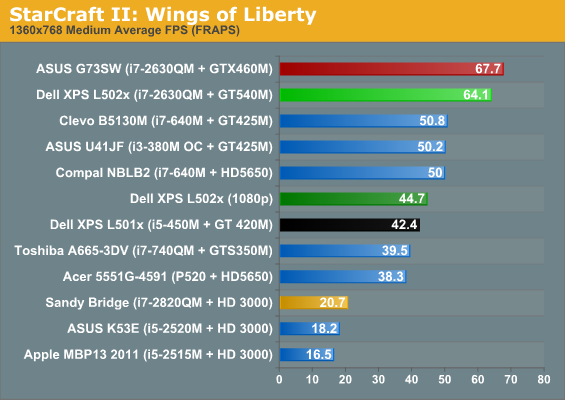 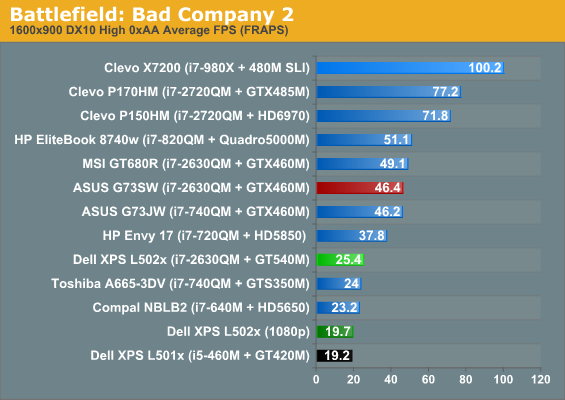 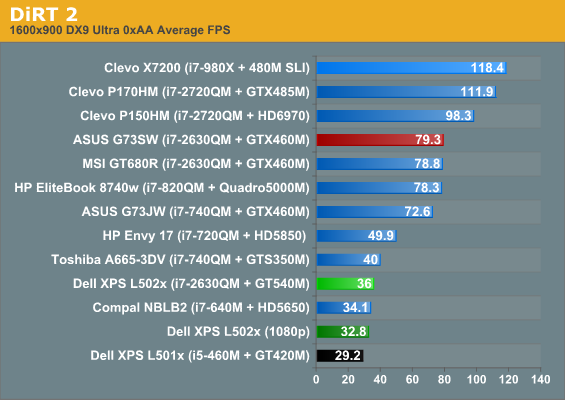 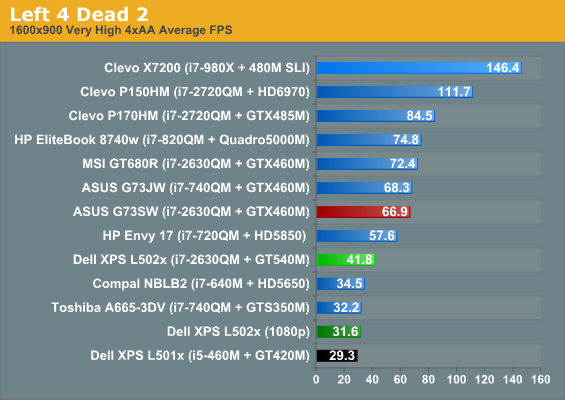 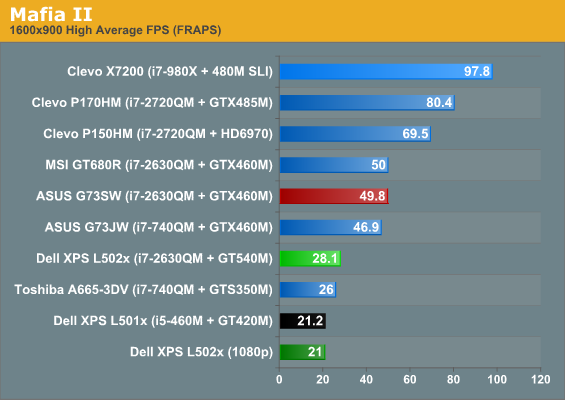 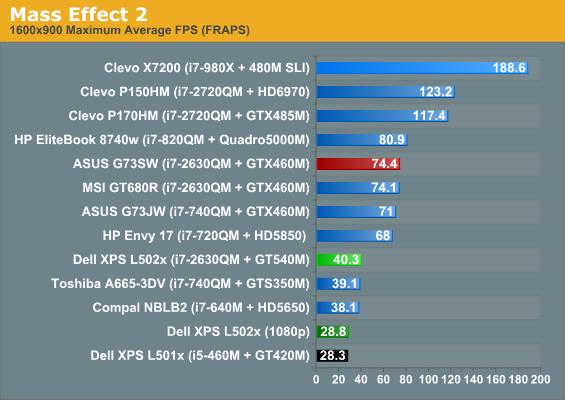 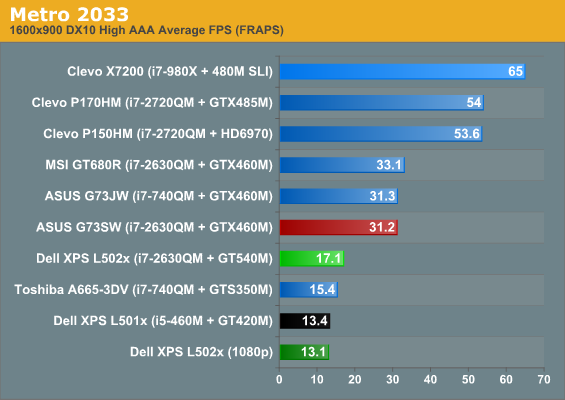 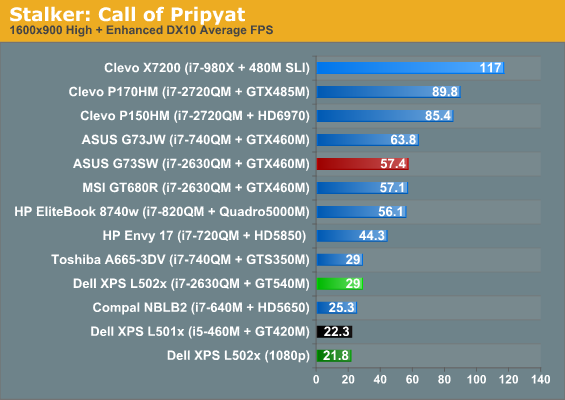 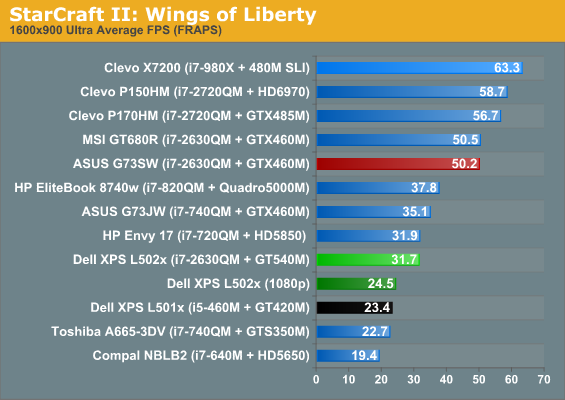 Looking at the charts and comparing the L501x with the L502x, the CPU actually appears to be a significant bottleneck at lower quality settings. That starts to go away once we move to medium quality and is largely gone at high quality, and there’s still the question of driver differences. The L502x is 31 to 63% faster than the L501x at our low settings, 12 to 51% faster at medium, and 23-43% faster at high. In general, the L502x is able to handle low to medium detail at the native 1080p resolution; if you want to run at medium to high settings you’ll often have to lower the resolution.

Going back to the ASUS G73SW (GTX 460M) comparison once more, we don’t have results for at low quality on the 460M, but the gap at medium is 6 to 198%—with the small 6% lead coming in StarCraft II, a game that can be extremely CPU limited at lower detail settings. If we remove SC2 from the list, the lead is 49 to 98%, which is more in line with what you’d expect from the GPU differences. At high detail, the lead grows to 58 to 120%—again with SC2 being the smallest difference, though L4D2 is similar in that it’s only a 60% lead for the 460M. So how does a GPU that’s got twice the computational performance and slightly more than double the bandwidth end up 120% faster in some games? The 540M in the XPS 15 comes with 2GB RAM versus 1.5GB in the G73SW, so that’s not the explanation. The likely culprit is Optimus, which can have a bit of a PCIe bandwidth bottleneck at times, though it’s possible there’s just something peculiar in how DiRT 2 does things.

If you’re after a good all-around laptop that can handle most games, the new XPS 15 improves on the old model but it’s often not a big enough change to allow you to run at native resolution with higher quality settings. What it does provide is a smoother experience at reasonable settings. The L501x could hit 30 FPS at 1080p and medium detail in three of our eight test games and the L502x breaks 30FPS with the same settings in five games (Mafia II, Mass Effect 2, and Metro 2033 being the exceptions). At our 900p High defaults, the L501x couldn’t break 30FPS in any of the games, but the L502x gets half the games (DiRT 2, Left 4 Dead 2, Mass Effect 2, and STALKER) above our “minimum desired performance” threshold. Dedicated laptop gamers however will still want more.

We’re still waiting to see where the GT 555M falls in terms of performance, but it should slot in nicely between the 540M and the significantly faster GTX offerings. All of the 540M and lower GPUs get saddled with the same 128-bit memory interface, and without GDDR5 to increase bandwidth there’s a significant bottleneck when you start increasing resolution. GDDR5 unfortunately is power hungry, so for the time being most mobile GPUs are saving it for their high-end SKUs where battery life isn’t a concern. Outside of the GTX line, the GT 555M is one of the few NVIDIA mobile GPUs where you can find GDDR5—and there’s some weird changes in the core and memory interfaces for the two 555M models.