The ID49C is a Land of Confusion

It's important to consider all facets of a laptop design in evaluating the overall build. Gateway tried to go upscale with the ID49C and produce something classy and stylish, something you might not immediately link to the Gateway name at first glance. What they produced is something that achieves that purpose in some areas, but there are other aspects of the design that completely miss the mark.

We'll start at the lid, which is admittedly very attractive. Accentuating the generally slender build of the ID49C, Gateway opted to use an aluminum alloy on the lid. It's basically aluminum over a plastic frame, and feels cool to the touch. Credit where credit is due: there isn't a speck of glossy plastic to be found on it (and very little anywhere else on the notebook for that matter.) Flex is actually pretty good and it, along with the matte plastic frame of the glossy screen, feels pretty firm. The build quality here at least is a lot better than we're used to seeing on other Acer and Gateway laptops, and certinaly a step up from Clevo's candy shells designed solely to house high performance hardware and not melt in sunlight.

What's inside is a welcome change from the glossy fingerprint-magnet hells we've come to expect from most of the other manufacturers, with a similar aluminum (or at least aluminum-looking) material used for most of the surface of the body. What little glossy plastic there is exists tastefully under the speaker grille, where the wireless switch and touch-based media controls are located. If the ID49C can be accused of anything just by looking at the internal design, it's that it's almost too spare and almost too plain. I'd sooner chalk that up to "you can't please everyone" than anything else, though. 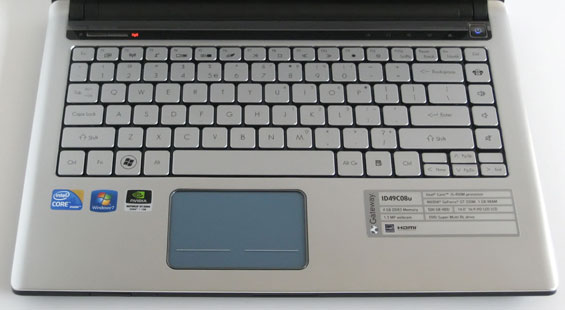 Before I get to the backlit touchpad (a phrase that will seem progressively sillier as this review wears on), a personal note to Acer/Gateway: your keyboard sucks. Seriously, this is a terrible design. It was bad when it was introduced, and has only gotten more terrible over time as you've continually foisted it on every single notebook and netbook you've released since its inception. If it were possible to hate something to the point of combustion, this notebook would be a flaming effigy on my front porch because of the sheer force of my disdain for this keyboard as it mangles every single Acer and Gateway review unit that comes across my desk, producing a point of compromise on otherwise reasonable value builds where none need exist. The aluminum shell is a nice change, but frankly we'd rather have a plastic case with a better keyboard first.

Of course, it only gets better on the ID49C, and by better I mean worse. While the silver key surfaces are at least mildly attractive, the keyboard bows in the middle whenever you type on it. The half-sized arrow keys are a little difficult to use, but the worst decision has to be switching the standard column of document navigation keys to "Fn" combos on the arrows and then using those keys to handle volume control and smiley faces. No, really, the key that would be "Home" on any sane keyboard has a trio of smiling people on it, and when you press it, it opens Gateway's "Social Networks" application. The others are volume up, volume down, and mute—functions that up until this point were really just fine being "Fn" combos. Acer keyboards, and the one on this unit in particular, cause me extreme existential duress. I can't sleep at night.

But I did mention backlit touchpad, didn't I? Why yes, yes I did. It's a unified touchpad (meaning it has the buttons built in instead of dedicated) similar to Apple's MacBook Pro line, but without the careful thought that went into the design. This is one of the better implementations I've seen, but it'll make you a tapper instead of a clicker in a hurry. The rubbery surface is actually pretty nice and easy to use, but the best part is the backlighting. Whenever you touch the "button areas", the touchpad lights up with a full-bodied white LED backlight. This functionality can be toggled on and off, but the pressing question is why was it included in the first place?

You can easily make a case for backlit keyboards; even touch typists periodically need to get their bearings in the dark—especially if you're looking for a function key or an Fn combo. But that's more than eighty individual keys. This is a single, big touchpad that operates as a single, big button. There's no practical purpose for it, and the instant the other cuts made to the design and configuration pop into your mind it only becomes more perplexing. Here's a thought: Gateway can't do keyboard backlighting with the silly "floating island" keys, and rather than giving us a better keyboard we get...this touchpad.

The rest of the build is an exercise in compromise as well. The port selection on the ID49C is paltry and behind the times. If you're not going to include USB 3.0, at least include eSATA. I'm the only person left in the world who cares about ExpressCard and FireWire, so I can live without those two on this machine, but not having any way to access external storage at a reasonable speed beyond USB 2.0 is ridiculous. Not even a combo port. The port placement is at least fairly sensible, but the row of three ports on the right hand side does run the risk of getting in the way of your mousing hand.

Finally, Gateway actually does a great job with the internals, with just a single panel and two screws giving you access to the hard disk, the wireless card, and the memory. Unfortunately, there's no notch for you to slip your fingernail into to pop the panel off: you have to wedge a flathead screwdriver between the panel and body of the notebook and then use some force to snap it off. I was actually worried the panel would snap in half when I was trying to remove it, so a measure of caution is required. Once you're in, though, it's well designed and easy to upgrade the individual components.