Build quality on the GX640 is a step up from the last MSI G-series laptop we looked at, though a few weak spots remain. The chassis is essentially unchanged, consisting of a main cover and palm rest with a classy brushed aluminum finish, but the glossy plastic highlights detract from this somewhat. Considering the amount of performance packed into the chassis, the 6.3 pound weight and 1.2" uniform thickness are actually quite good. It's still heavier and will run hotter than less potent laptops, but it's small enough that using it on a plane is possible (albeit cramped). 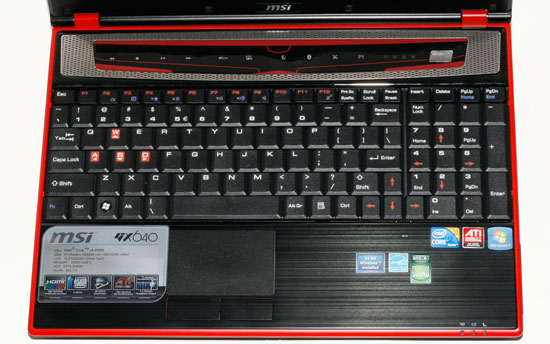 The keyboard continues to be the weakest link here, with an old-style design. We actually don't mind the shape of the keys, but the action is mushy and the keyboard exhibits a lot of flex. This has been a complaint we've leveled against several MSI laptops over the years, and yet we have to bring it up again. Really, fixing the keyboard should be very easy—just give it a stiffer backplate and we'd be happy. Other laptops also include LED backlighting on the keyboard, which is a nice feature and might make it more difficult for engineering to create a flimsy keyboard. Just a thought.

Other than the flex, the layout is generally good, and the number keypad has the correct oversize Enter and Plus keys on the right. However, there are a few areas where important keys require an Fn combination, specifically the Home and End keys. I can't tell you the last time I used the Pause/Break key or the Scroll Lock key on a computer, but I use End/Home all the time; there's really no need to waste space on keys no one uses with this size chassis. Finally, the Fn and Ctrl keys in the bottom-left have their locations reversed, at least relative to how I like them. Lenovo and some others provide a BIOS function to swap these keys, and we'd really like to see that feature on every laptop; it allows you to please all users in a simple fashion.

Above the keyboard are 10 multimedia/quick access keys that allow you to enable/disable WiFi, Bluetooth, and the webcam as well as controlling the "Eco" mode. In testing the Eco utility didn't help much unfortunately. We're missing the functionality of other laptops (i.e. ASUS) where you can have the system power off the optical drive and other features when they're not needed. Finally, the P1 key can be programmed to launch a favorite application if you're so inclined.

The touchpad works well, and we don't have any real complaints there. It supports multitouch and has two "separate" mouse buttons. We put that in quotes because the buttons are partially punched out of the aluminum palm rest. It's not the nicest set of buttons I've used, but I do appreciate the fact that they don't have a glossy rocker button that only serves to catch fingerprints. The Fn+F3 key combination gives you an easy way to disable the touchpad if you're typing fast and getting inadvertent "clicks"—or if you happen to connect an external mouse, which is still pretty much required for playing games.

Poking around inside the GX640 is pretty simple. There are two covers on the bottom, each secured by two screws. We're a little leery of the large cover and the potential for some of the plastic clasps to break if you open/close it regularly, but for infrequent access it should be fine. The smaller cover is for the hard drive, while the large panel gives you access to the RAM, CPU, GPU, mini-PCIe slots, and the entire heatsink/heatpipe assembly. Not surprisingly, judging by the size of the cooling plate and heatpipe, the GPU is capable of putting out quite a bit more heat than the CPU. In use, the system is always warm, and gets downright hot when playing games for extended periods. It's possible to swap out the CPU for something faster (we've seen resellers allow up to the top i7-920XM processor), but cooling might be a problem if you push things too far.

The GX640 is a decent laptop overall, with the biggest complaints involving the keyboard. Build quality is acceptable, and the aesthetic has improved since the last G-series we looked at. However, the biggest attraction remains the price, as $1100 (slightly less) for this much laptop is a great deal. It's the latest iteration of the midrange gaming notebook ideal that started with the Gateway P-6831 FX, and in many ways the design is similar—right down to the oversize battery jutting out the back. You can find faster laptops, or laptops that don't run quite as hot or loud, but the next step up is going to be the ASUS G73Jh (or MSI's own 17.3" GX740 with HD 5870), which means several hundred dollars more for a larger box and only a moderate bump in performance.