The performance of the Kingston DT Max in various real-world access traces as well as synthetic workloads was brought out in the previous section. We also looked at the performance consistency for these cases. Power users may also be interested in performance consistency under worst-case conditions, as well as drive power consumption. The latter is also important when used with battery powered devices such as notebooks and smartphones. Pricing is also an important aspect. We analyze each of these in detail below.

Flash-based storage devices tend to slow down in unpredictable ways when subject to a large number of small-sized random writes. Many benchmarks use that scheme to pre-condition devices prior to the actual testing in order to get a worst-case representative number. Fortunately, such workloads are uncommon for direct-attached storage devices, where workloads are largely sequential in nature. Use of SLC caching as well as firmware caps to prevent overheating may cause drop in write speeds when a flash-based DAS device is subject to sustained sequential writes.

Our Sequential Writes Performance Consistency Test configures the device as a raw physical disk (after deleting configured volumes). A fio workload is set up to write sequential data to the raw drive with a block size of 128K and iodepth of 32 to cover 90% of the drive capacity. The internal temperature is recorded at either end of the workload, while the instantaneous write data rate and cumulative total write data amount are recorded at 1-second intervals.

The Kingston DT Max sustains the maximum write transfer rate for close to 100 seconds - around 95GB of data - before the 'direct-to-TLC' writes start. Beyond that, the write speeds drop down to an average of around 80 MBps. This type of SLC caching behavior / direct-to-TLC penalty is not seen in the dual-chip bridge solutions. It must also be noted that the temperature read-out was 92C at the end of the process. Given the lack of a thermal solution inside the UFD, and the transfer rates involved, it is not much of a surprise to see the high temperature.

While bridge chip-based solutions operate at around 2.5W with peaks of 5W+, the Kingston DT Max is much more power efficient. The UFD goes to deep sleep of around 8 - 9mW after around 20 minutes of lack of traffic. Average power usage is around 1.4W, and the peak is only 3.04W.

The Kingston DT Max is available for pre-order today - hovering around $166 on B&H. It appears that retailers are happy to tag on a premium to this product for its uniqueness, given that the 2GBps-capable Kingston XS2000 is priced lower at $160. Given that the 256GB and 512GB versions are priced at $58 and $97, a sub-$150 price for the 1TB Data Traveler Max would work better on the current market. The real competition here is the dual-interface Akasa AK-ENU3M2-04 with its male connectors and user-replaceable SSD. Including a 1TB SSD would still land it at a sub $140 price point. 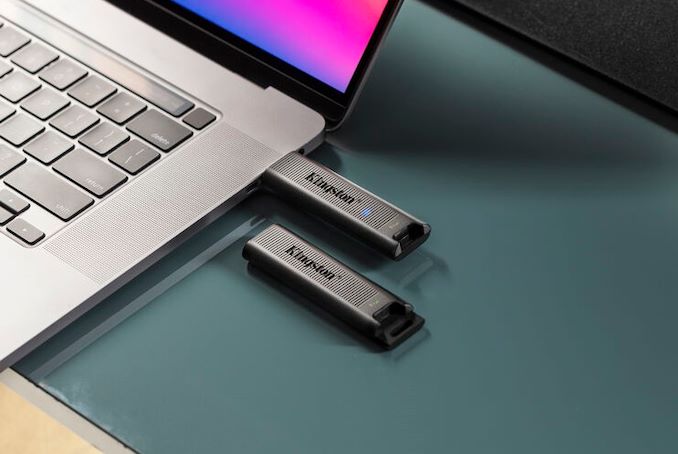 Overall, the Kingston DataTraveler Max is a hands-down winner in terms of industrial design, form-factor, performance, power efficiency, and uniqueness. The SLC cache is big enough for users to not worry too much about the sub-100 MBps performance numbers seen for extreme workloads. That said, there is some scope for improvement in thermal design. Additionally, a dual-connector (Type-C + Type-A) product could be a great addition to the family. Given what we have seen of Silicon Motion's SM2320 in the Kingston DataTraveler Max, it is clear that USB thumb drives are approaching portable SSDs in performance - that is good from a consumer viewpoint.