We’ve known for a while that AMD was set to launch its next generation enterprise EPYC processor family, collectively known by its codename Milan, sometime in the first quarter of this year. Today AMD has put out a press release confirming the date and time of its online event – the launch of the new 7003 series processors will occur starting at 8am PT/11am ET on March 15, 2021. 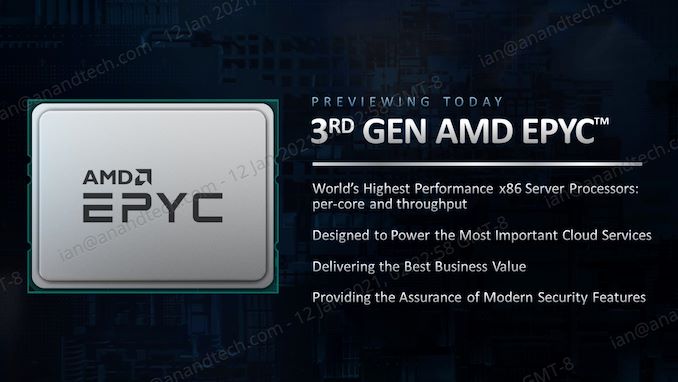 To date we know that AMD’s Milan processor line will feature up to 64 Zen 3 cores, using a seemless transition from the Zen 2 EPYC Rome ecosystem with pin-compatible processors. Milan will also offer up to 128 PCIe lanes, eight channel memory, and dual socket configurations. If the desktop Zen 3-based processors are any measure, +19% IPC generational gains are expected with the new processor, despite main memory access likely remaining the same. We have questions on exact performance, frequencies and efficiency, but this launch date should showcase all the product specifications such that we will see where the solution sits compared to current market offerings.

AMD has provided some previous benchmarking numbers – at CES the company showcased weather prediction simulation code, with two new 32-core Milan processors up against two of Intel’s popular 28-core Xeon Gold 6258R units. In that first party demo, a six hour simulation showed that Milan was 46% faster in dual socket compute. Later we were shown a single socket comparison, where the difference rose to 68%. These were first party tests without any comparison system details, however we expect more data on the March 15th launch. 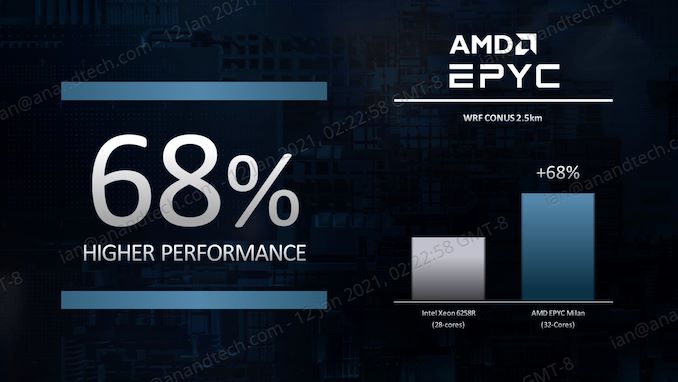 Questions will be asked about AMD’s ability to supply EPYC, given it currently has a squeeze on its supply chain for a number of products. We are aware that AMD has already been providing key customers with complete silicon, and also to add to this, Dr. Lisa Su has stated that one of AMD’s key targets for 2021 is going to be the enterprise market.

We will be live blogging AMD’s launch – it can also be found online at the AMD events website.