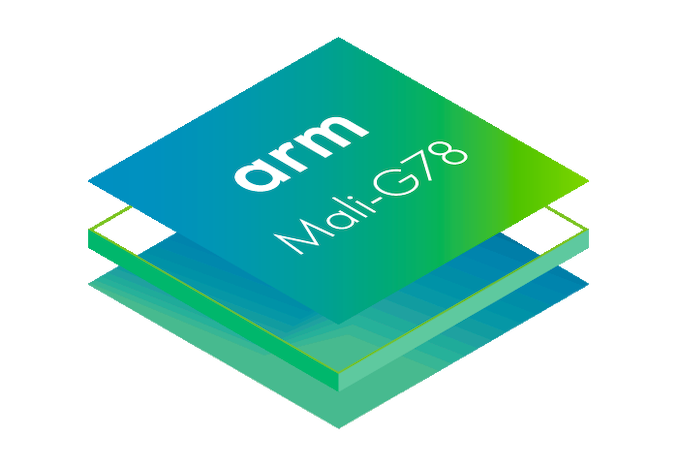 Today as part of Arm’s 2020 TechDay announcements, alongside the release of the brand-new Cortex-A78 and Cortex-X1 CPUs, Arm is also revealing its brand-new Mali-G78 and Mali-G68 GPU IPs.

Last year, Arm had unveiled the new Mali-G77 which was the company’s newest GPU design based on a brand-new compute architecture called Valhall. The design promised major improvements for the company’s GPU IP, shedding some of the disadvantages of past iterations and adapting the architectures to more modern workloads. It was a big change in the design, with implementations seen in chips such as the Samsung Exynos 990 or the MediaTek Dimensity 1000. 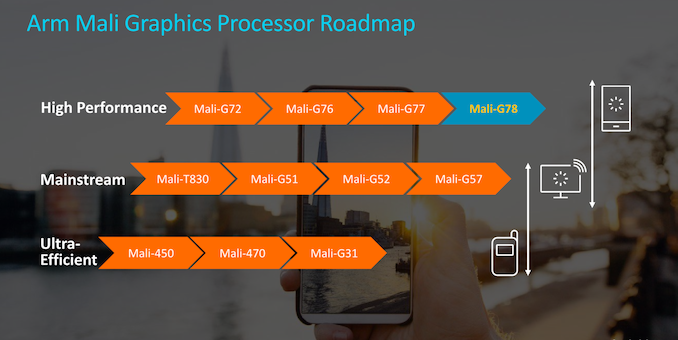 The new Mali-G78 in comparison is more of an iterative update to the microarchitecture, making some key improvements in the matter of scalability of the configuration as well as balance of the design for workloads, up to some more radical changes such as a complete redesign of its FMA units. 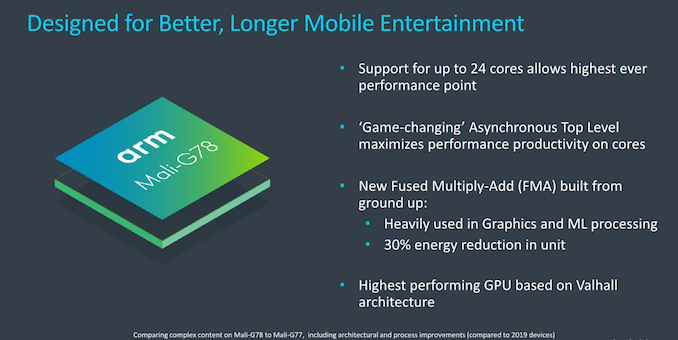 On the scalability side, the new Mali-G78 now goes up to 24 cores in an implementation, which is a 50% increase in core count compared to the maximum MP16 configuration of the Mali-G77. To date, the biggest configuration we’ve seen in the wild of the G77 was the M11 setup of the Exynos 990, with MediaTek employing an MP9 setup. 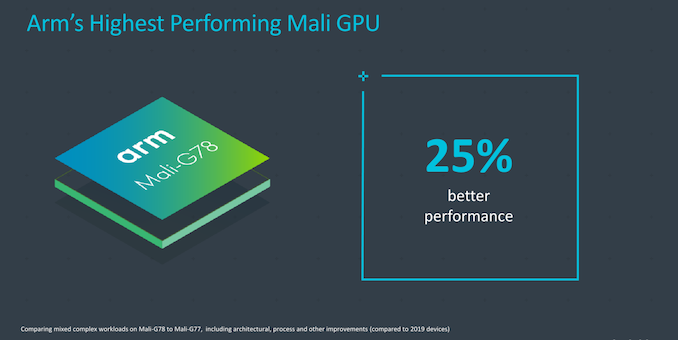 In a projected end-device solution comparison between 2020 and 2021 devices, Arm is projecting the new Mali-G78 to achieve 25% better performance, which includes both microarchitectural as well as process node improvements. That’s generally the reasonable target that vendors are able to achieve on newer generation IPs, but it’s also going to be strongly depending on the exact process node improvements that are projected here – as GPUs generally scale better with improves process density rather than just frequency and power improvements of the silicon. 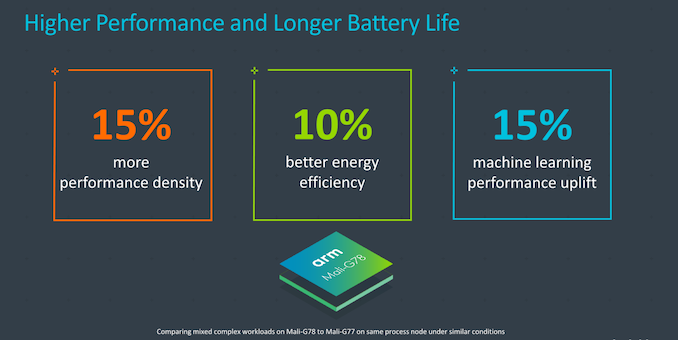 At an ISO-process node under similar implementation area conditions, the Mali-G78 is claimed to improve performance density by 15%. This is referring to the either performing 15% better at the same area, or shaving off 15% area for the same performance, given that this can be done linearly by just adjusting the amount of GPU cores implemented.

Power efficiency sees a more meagre 10% improvement, which honestly isn’t too fantastic and not that big of a leap to the Mali-G77. ML performance is also said to be improved by 15% thanks to some new microarchitectural tweaks.

Seemingly, the Mali-G78 doesn’t look like too much of an upgrade compared to the vast new redesign we saw last year with the G77 – and in a sense, that does seem somewhat reasonable. Still, the G78 does some interesting changes to its microarchitecture, let’s dwell a bit deeper into what’s changed…