04:41PM EDT - The keynote for day one at Hot Chips is from Dr. Lisa Su, AMD of CEO. AMD is riding high after successful Ryzen 3000 and 2nd Gen EPYC Rome launches, so it will be interesting to hear what she has to say.

04:41PM EDT - I'm sat down and we should be starting here in a few minutes

04:42PM EDT - The audience suddenly got a lot denser

04:43PM EDT - I'm sitting next to Paul Alcorn from Tom's Hardware. The other usual Hot Chips suspects are in the crowd - Patrick Kennedy, David Schor

04:43PM EDT - I'm sitting next to Paul Alcorn from Tom's Hardware. The other usual Hot Chips suspects are in the crowd - Patrick Kennedy, David Schor

04:48PM EDT - Today we generate a large amount of data. That data has to be processed and analysed. Data is driving the next generation of high performance computing

04:48PM EDT - Hot Chips has had a long time focus on big data and data analytics

04:49PM EDT - The industry has been driving for high performance compute. Not just AMD

04:50PM EDT - CPU and GPU - doubling perfromance about every 2.5x years. This is the rate and pace of innovation 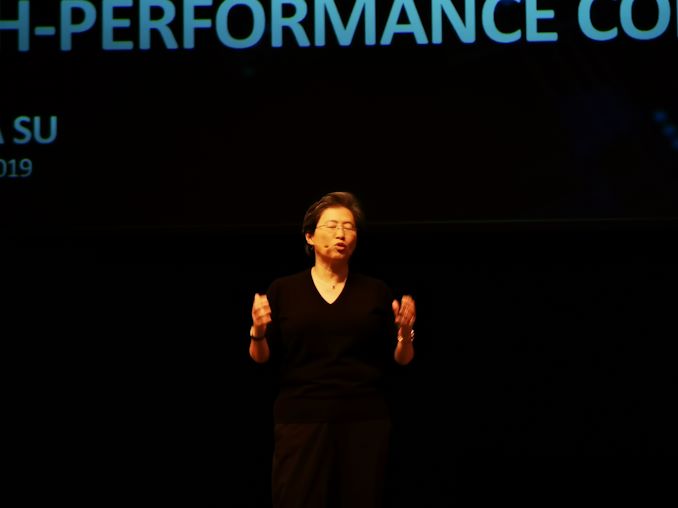 04:50PM EDT - But density and power efficiency is not improving at the same rate.

04:51PM EDT - Power is becoming the new constraint with the newest generation of products 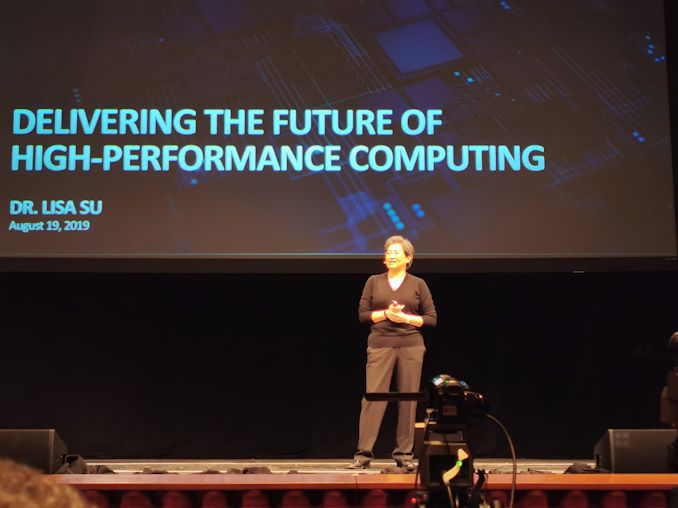 04:52PM EDT - 17% microarchitecture, 15% on power management, 8% compilers. All of these are non-silicon and architectural 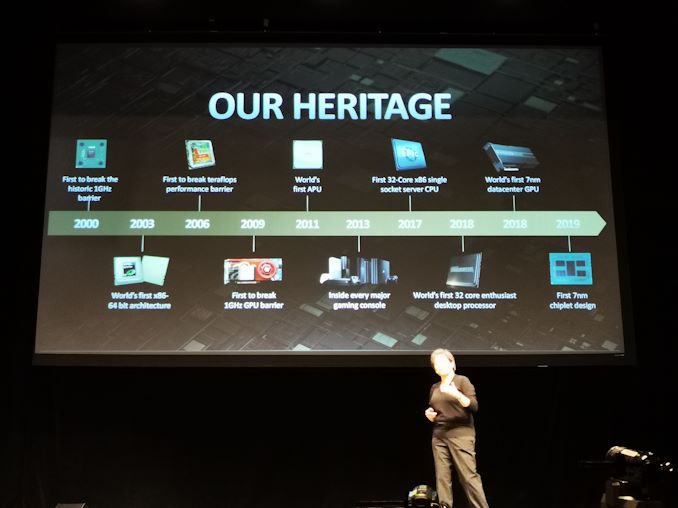 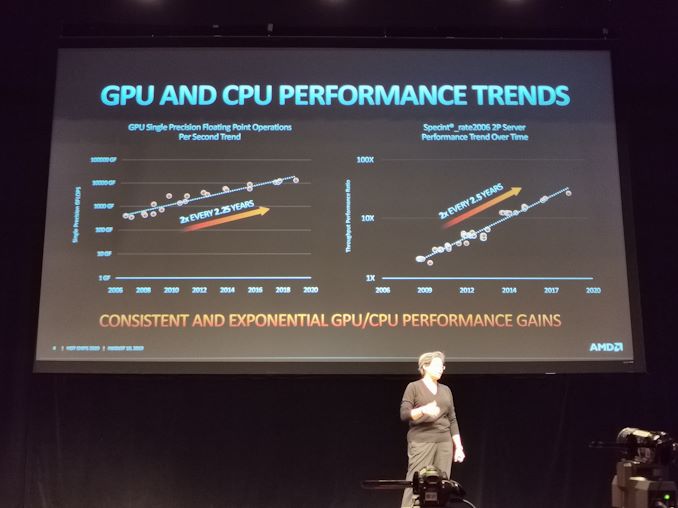 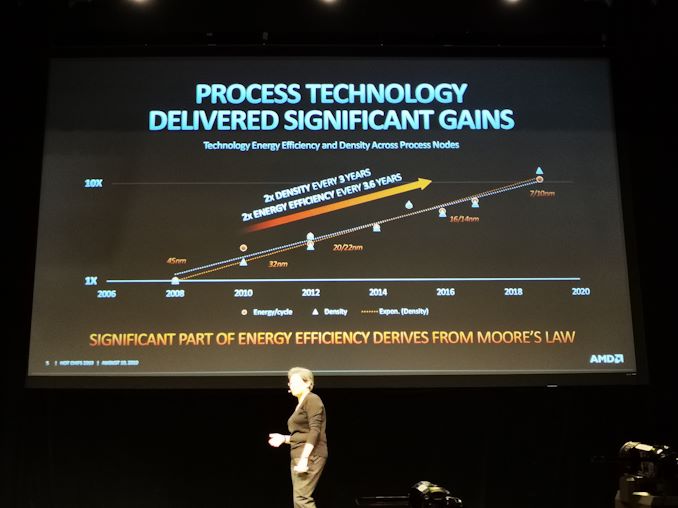 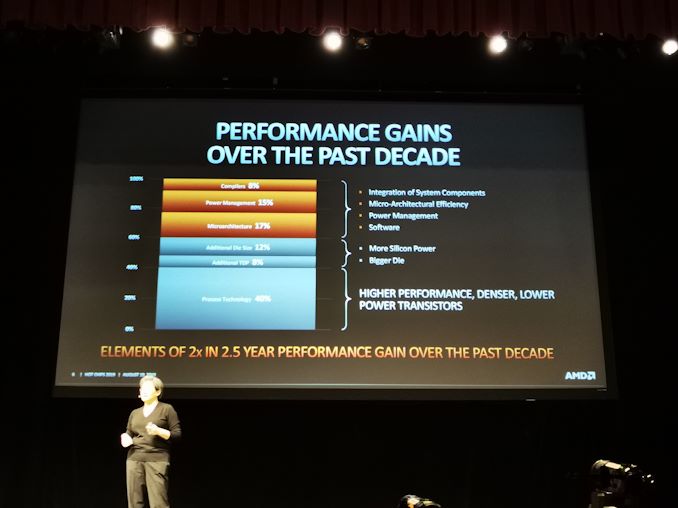 04:53PM EDT - It's getting harder and harder every generation on every vector too

04:54PM EDT - New process nodes take longer and longer, that reduces some of the cadence gains 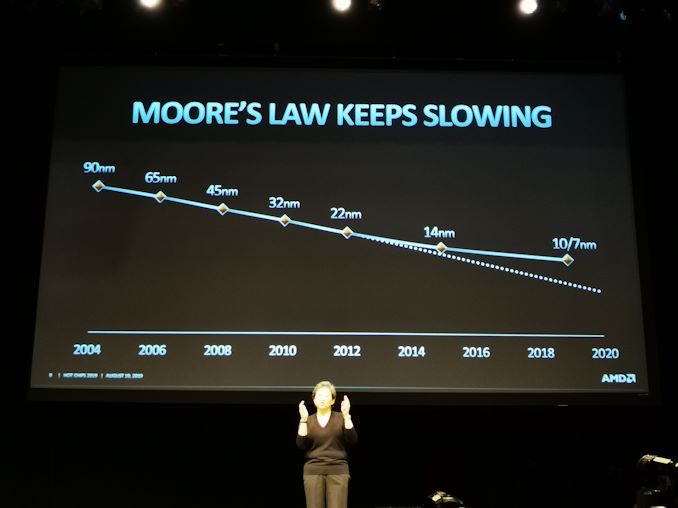 04:54PM EDT - Cost per transistor increases with the newest processes 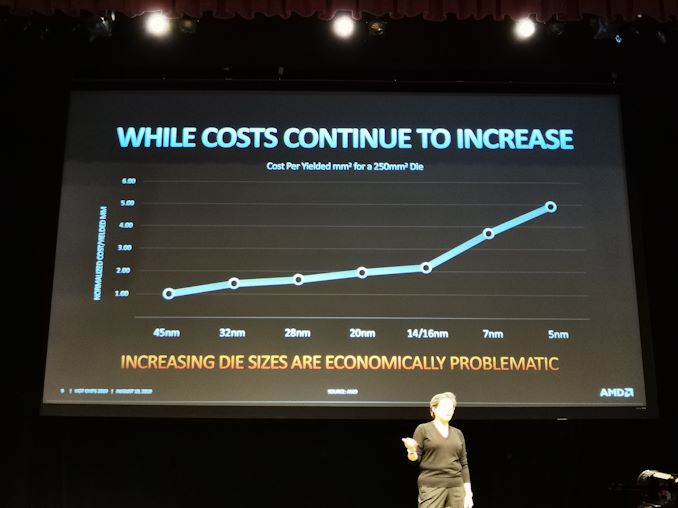 04:56PM EDT - Pure computation of server power is not that big 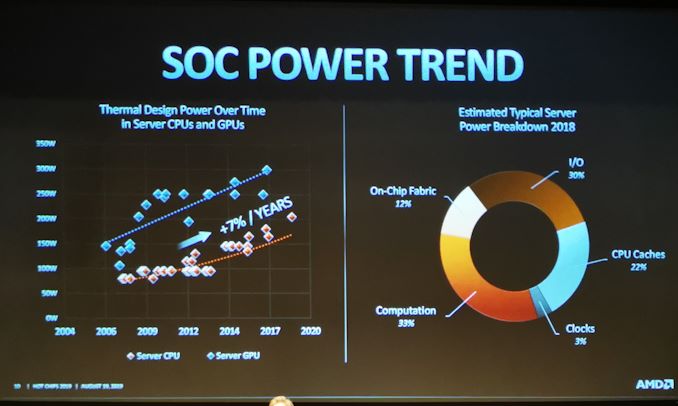 04:57PM EDT - Large die sizes are not that efficient for yields and costs 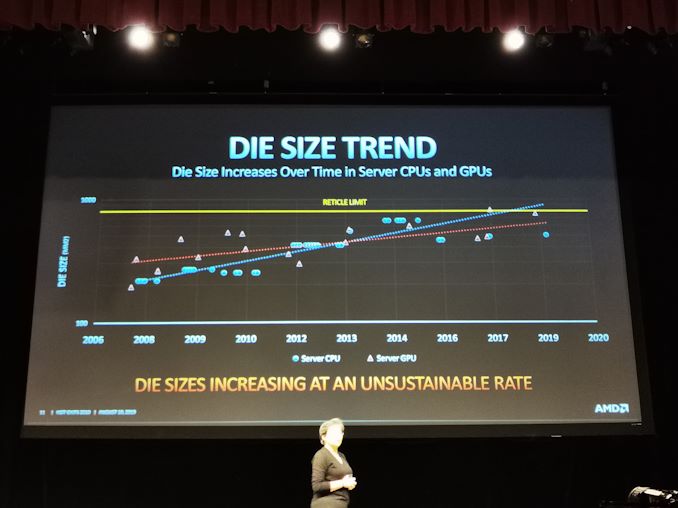 04:59PM EDT - Ecosystem has to work together

04:59PM EDT - AMD can bring the best of the ecosystem together in terms of silicon and software to maintain the trends around high perf computing 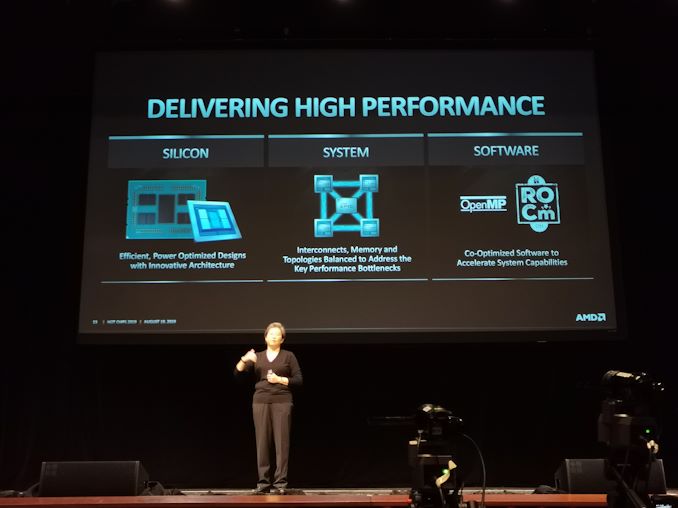 05:00PM EDT - AMD has being going above the industry trend in IPC 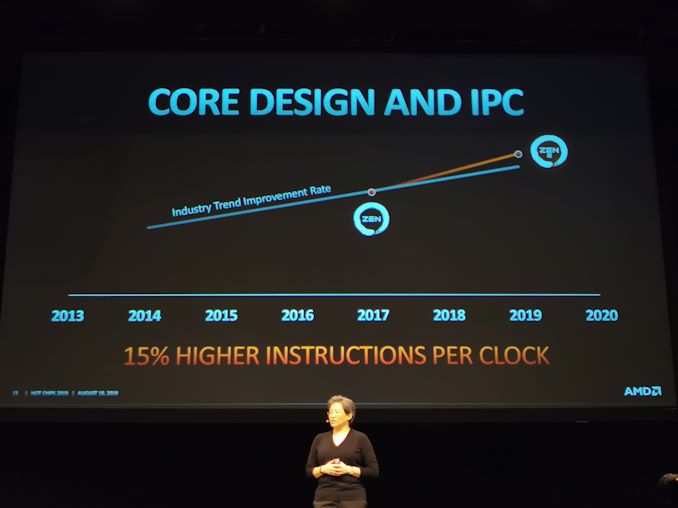 05:00PM EDT - AMD's goal is to stay above the industry trend line

05:01PM EDT - Every generation there is low hanging fruit to optimize for. We always do this 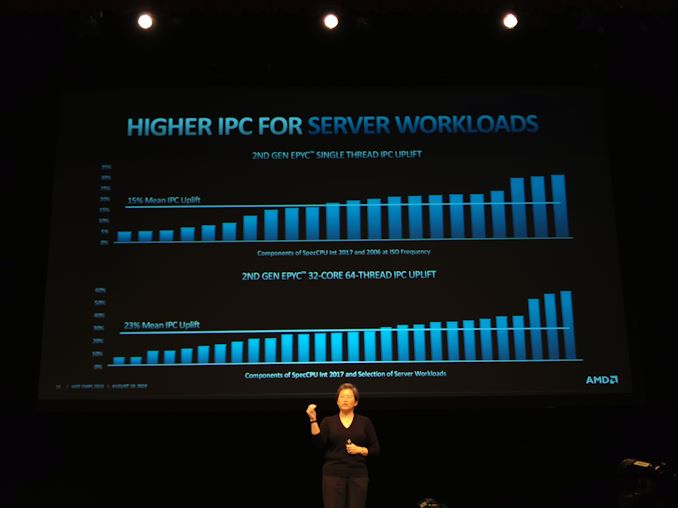 05:03PM EDT - You can keep doing monolithic chips, but you end up being limited on performance 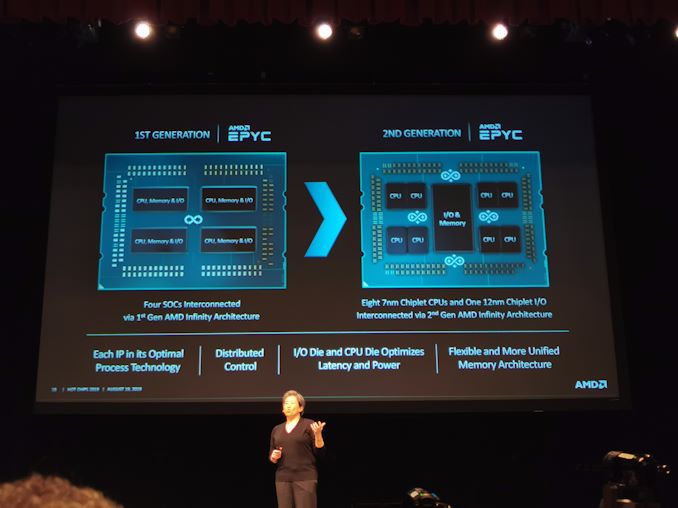 05:04PM EDT - Optimizing the right transistor for the right technology

05:04PM EDT - Each IP is in its optimal process technology

05:05PM EDT - "You will see this in high performance workstations"

05:07PM EDT - The mroe you know about the application, the better you can optimize the system and silicon 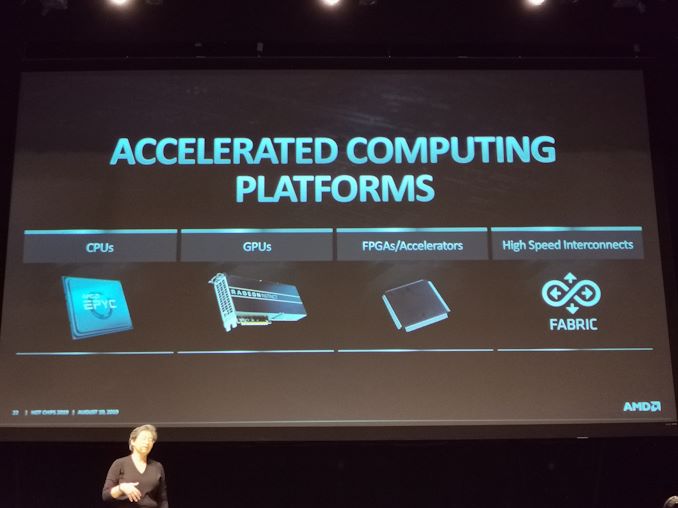 05:07PM EDT - Pick the best compute for the best application

05:08PM EDT - Each workload has different ratios of CPU/GPU

05:08PM EDT - All of it still needs to connect properly, no matter the ratio 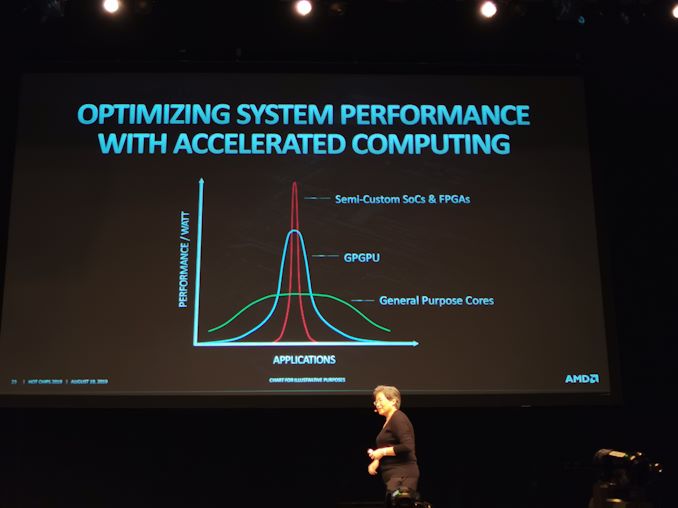 05:09PM EDT - Optimize for the problem based on the hardware

05:10PM EDT - These are the elements of an accelerated platform 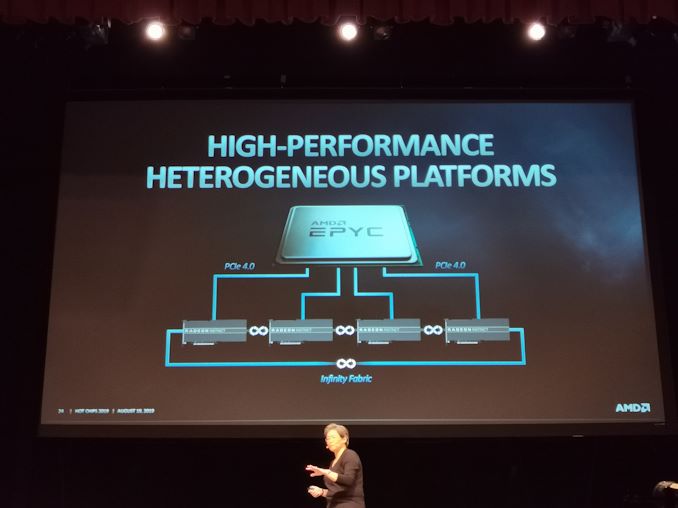 05:11PM EDT - System needs to be as programmable as possible to get the most out of the silicon

05:11PM EDT - Scale up and Scale out with hardware, and AMD believes in an open source environment on the software 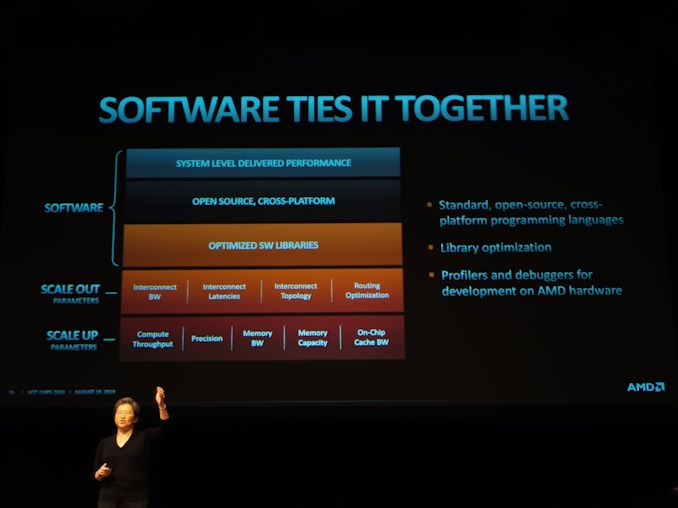 05:12PM EDT - Hardware and Software co-optimization to get the best performance

05:13PM EDT - Supercomputers are the best manifestation of all these technologies

05:13PM EDT - How to push the envelope with computing to enable a solution to a series of problems

05:14PM EDT - Traditional HPC and new Machine Learning methods are being mixed very quickly because they share many of the same compute requirement characteristics

05:14PM EDT - Problems that lend themselves to parallelism 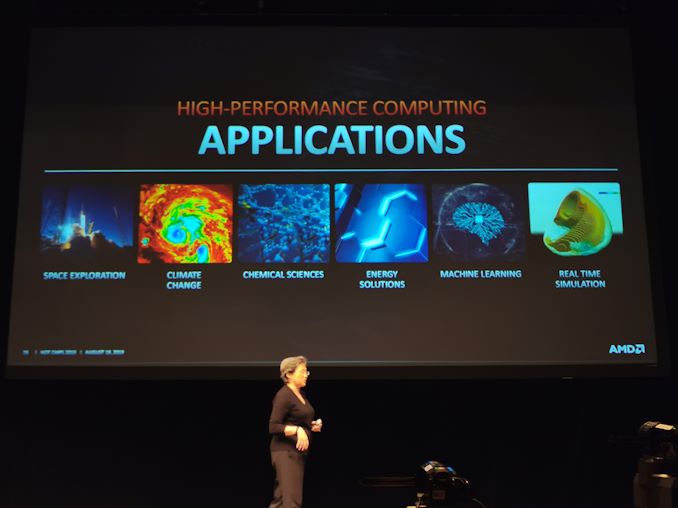 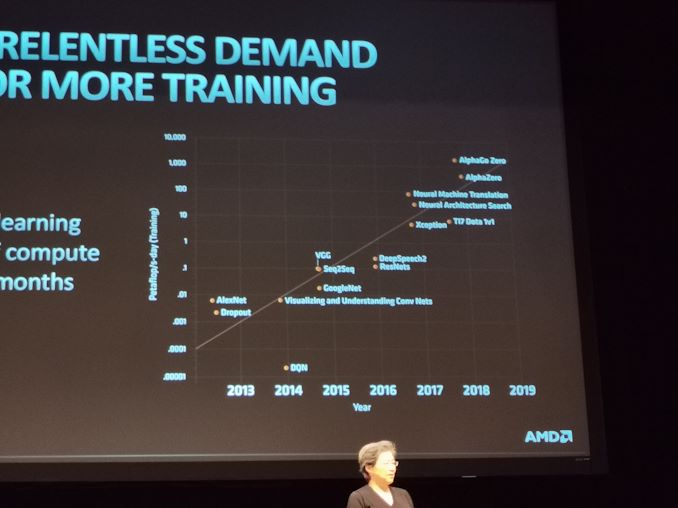 05:15PM EDT - For the most advanced algorithms, doubling of compute requirements every 3-4 months (Intel says the same)

05:16PM EDT - You either optimize for efficiency, or build out the compute. In reality, you do a bit of both

05:17PM EDT - But recently, the rate of progress is slowing 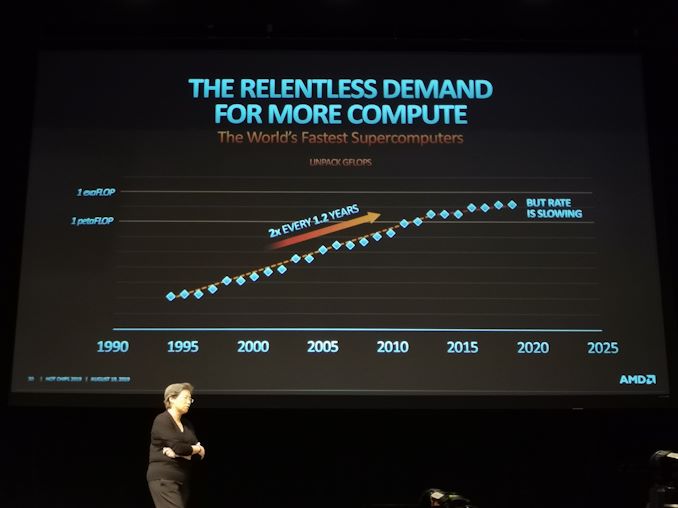 05:17PM EDT - AMD's goal is to use significant innovation to get that curve back on track 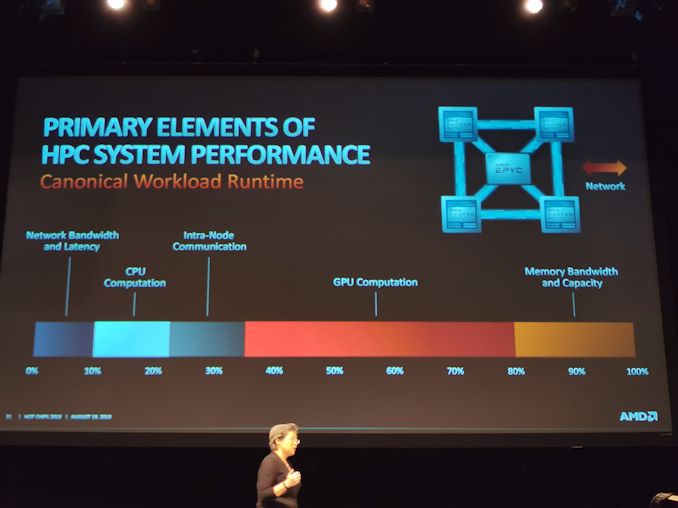 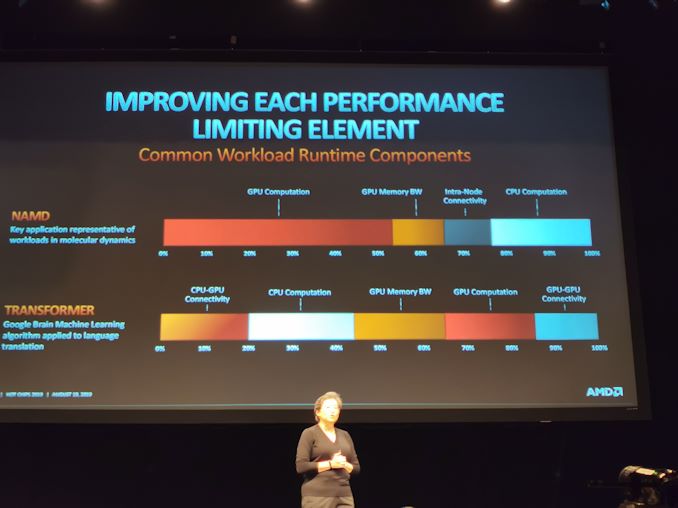 05:19PM EDT - There's not one way to speed up all of these workloads - old workloads and new workloads

05:20PM EDT - Not only compute, but memory and connectivity 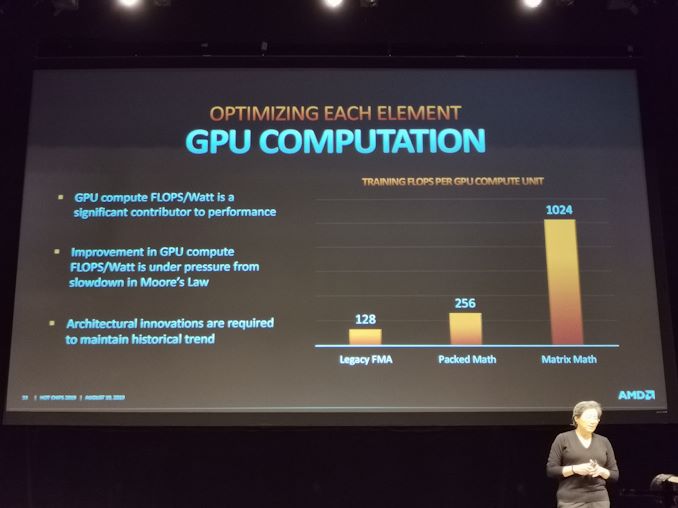 05:20PM EDT - That's going to continue to be innovated upon

05:21PM EDT - Connectivity is also increasing, but not as fast as CPU compute 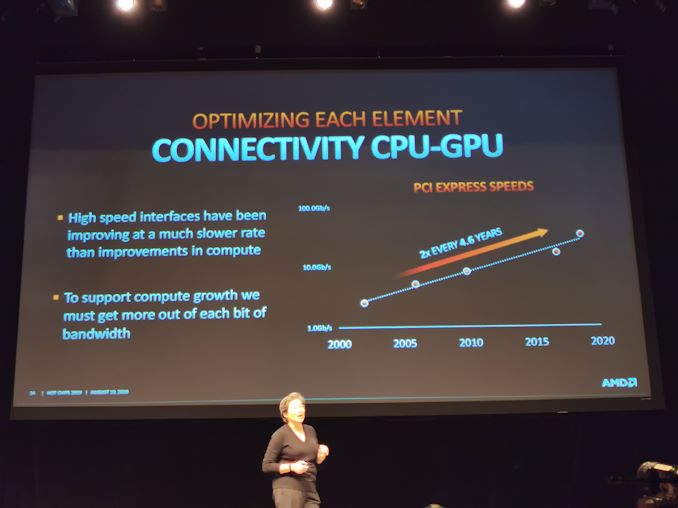 05:21PM EDT - Connectivity to accelerators is a hot topic

05:22PM EDT - Memory bandwidth is also increasing, but memory bw over time isn't quite keeping up 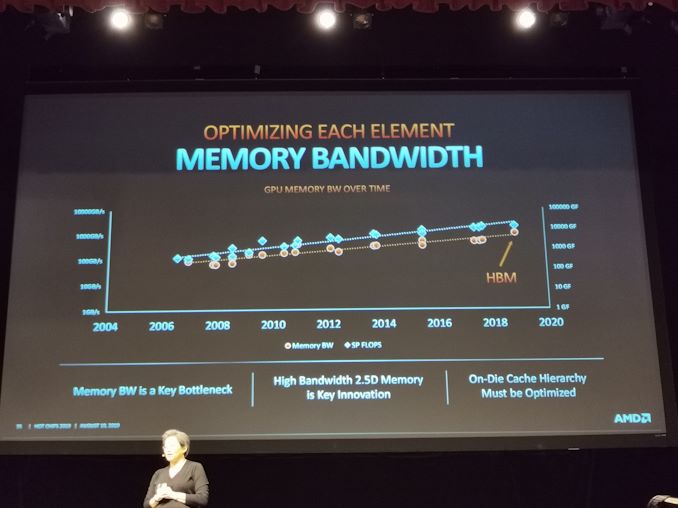 05:22PM EDT - on-die cache hierarchy must be optimized on GPUs 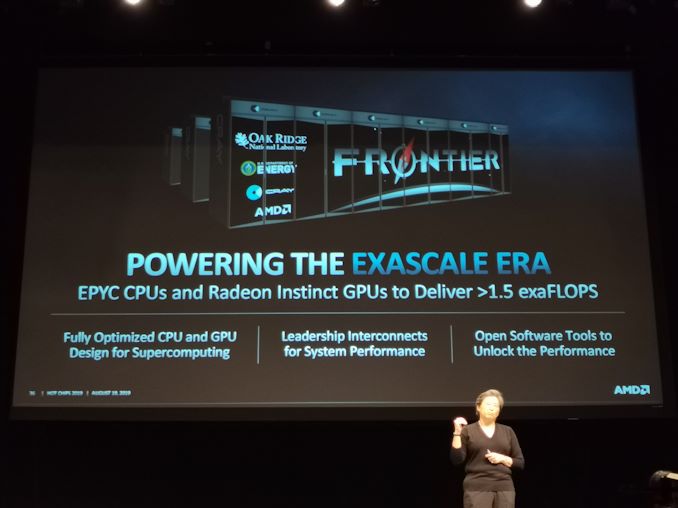 05:24PM EDT - Important for traditional HPC applications as well as AI and ML

05:25PM EDT - How to push the envelope in computing on every element of the HPC system

05:25PM EDT - Computational efficiency has a knock on effect

05:25PM EDT - High Performance Computing is one of the most exciting areas of the market today 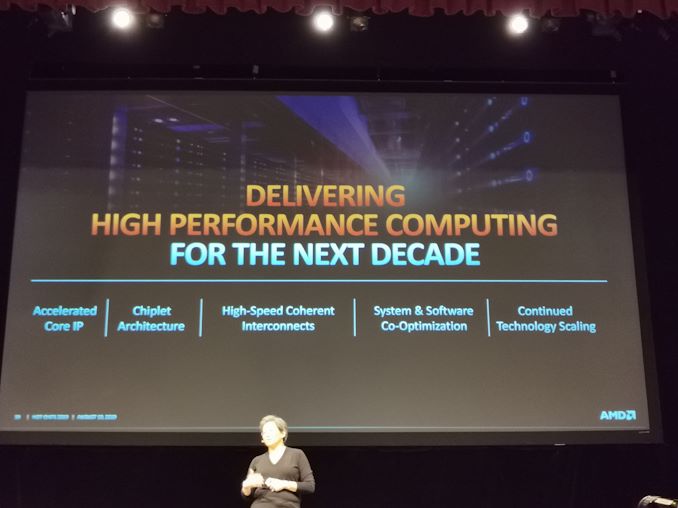 05:26PM EDT - If we know what the application is doing, can develop better silicon

05:26PM EDT - Exponential curves look nice, and there are plenty of smart people in the industry to keep pushing

05:29PM EDT - Q: What is the next step for AMD against things like the TPU in AI? A: There is tremendous innovation in the industry. Lots of companies doing purpose built ASICs for specific applications. Over time, these things will narrow. Lots of lots new ideas, and the ideas that are most sustainable will shine through. AMD's goal is to optimize each element. That includes CPU/GPu/Interconnect. That may include purpose built accelerators. But what is important to AMD is to connect the ecosystem together, connect to AMD's CPUs and GPUs. We believe not any one company will have the best ideas. The more we can drive standards, the better we will be for AI.

05:30PM EDT - Q: Any plans for any speicfic AI accelerators? A: You will see as a large player in AI. Our desire to pick the winning solution - there will be many solutions - the importance is that we're putting more and more purpose built accelerators on our silicon as part as that. Whether we do our own accelerators will depend how the industry evolves. But the CPU/GPU/interconnect strategy is to move forward.

05:32PM EDT - Q: Do you see thermal as a limit? A: Yes, for sure. Thermal is a big driver. If you look at the amount of power management that our newer generation of processors do, the sophistication of our algorithms, all of that is really important. We also look how to best thermal characteristic across the chip as uniform as possible. No question that this is a huge part of the optimization, we tend to believe there are some limitations, but a tremendous amount of sophistication on these processors and every square mm is optimized.

05:34PM EDT - Q: Neural computing, quantum computing. Do you see this time of paradigm will also recreate the RISC vs CISC argument? A: I think we can all say we have at least a 30 year job, so I'm not worried :) Quantum computing is very interesting, and who will get there first. We're still at the early stages of these focused problem architectures, unlikely one will become the next general purpose architectures. There is so much energy today about optimizing general prupose compute, and these things have to intercept at some point, but it's still very early in that time frame.

05:35PM EDT - Q: GPu-to-GPU comms? Is Crossfire coming back? A: We love gamers and we always talk about gamers. I would say that GPU performance will continue to go forward at a fast pace. To be honest, the software is going faster than the hardware, I would say that Crossfire isn't a significant focus. GPUs can do a lot in the consumer space.