As we briefly touched on when going over the display technologies, the basic operation of a LCD display is that voltage is applied to the liquid crystal, which either twists or rotates it, allowing polarized light from the backlight through to the different subpixels which provide the red, green, and blue colors. In case you hadn’t noticed yet from all this discussion on color, what most of us are taught in elementary school on what the primary colors are is – while not entirely incorrect – not applicable to displays. Red, green, and blue are the primary colors for emissive (additive) light to give the widest range of color combinations, which is why subpixels are that color. If you were looking at subtractive colors, such as printing on white paper, you'd use cyan, magenta, and yellow. 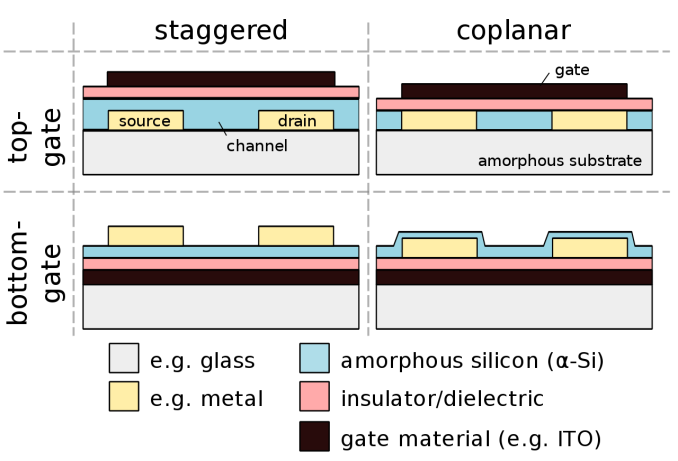 The basic function of an LCD is to twist an appropriate amount to provide varying levels of light through in order to combine red, green, and blue to make all of the colors you see on your display. To move the liquid crystal, voltage is required, and that voltage is provided through at least one transistor. Since transistors are semiconductors, manufacturers are somewhat limited in what they can use to build the matrix out of, and since you must shine a backlight through it, preferably the transistor will not block all of the backlighting.

Displays leverage a thin-film transistor, or TFT, to provide the matrix of transistors which control all of the subpixels. Traditionally, TFTs were generally made out of amorphous silicon (a-Si) which can be made much thinner than the more traditional crystalline silicon (c-Si) you’d find in an integrated circuit. This allows the backlight to shine through the TFT without being attenuated as drastically as it would be on a c-Si TFT.

While a-Si has served us well for a long, long time, as displays move up in pixel density, the amount of light blocked by the TFT gets to be a higher percentage, since you need more transistors in a given area to control the increased number of pixels. To combat this, manufacturers are developing new TFT materials which provide increased aperture for the backlight.

This is likely to be an ever-expanding list of materials, but materials which provide a higher aperture than a-Si are low-temperature polycrystalline silicon (LTPS) and indium gallium zinc oxide (IGZO). Sharp has been manufacturing IGZO displays for several years now, and LTPS is used in both laptops and smartphones. 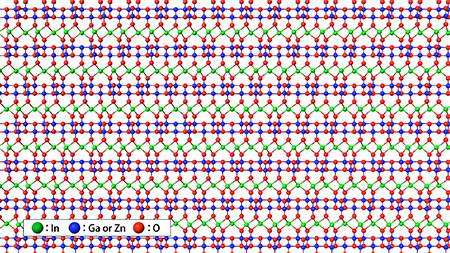 An image of the crystaline structure of IGZO - Source: Sharp

Of course, the major reason for the push to these technologies is to improve power efficiency. When you’re powered by a battery, any increases to the efficiency of the display can be dramatic, since the display backlight is often the highest power draw component of a laptop at idle (and laptops like to be idle). As an example, a Surface Book 2 15 with the display set to 100% brightness draws 7.65 W of power at idle. Of that, the display constitutes an amazing 6.22 W, or 81.3% of the power draw. By allowing more light through – via creating a thinner TFT – the net result is a reduction in power required for a backlight, improving its overall efficiency and generally providing a major benefit to a laptop's battery life.

There’s a lot of confusion here, and a common question you may see is if an IGZO or an IPS display is better, but IGZO is the TFT material, and IPS is the LCD type.

As far as backlighting goes, all modern laptop LCDs require a backlight. Laptops in turn generally rely on white LED backlighting, where the LEDs are located at the edges of the display, and the lighting from those LEDs is shone through a diffuser plate behind the display to provide a uniform backlight. This is most commonly referred to as an edge-lit display.

On larger displays where power draw isn’t as much of a concern, such as televisions, some manufacturers have moved to a full-array backlight, which puts the LEDs directly behind the display. This allows the individual LEDs to be dimmed to provide local dimming, which improves black levels quite dramatically, however it’s unlikely laptops will adopt this due to the extra thickness and power required. On high-end computer monitors, you may find a backlight made up of RGB lighting as well, but for the same reasons, laptops are unlikely to leverage this design.

The only display that doesn’t require a backlight is Organic Light Emitting Diode, or OLED, since the individual OLED subpixels emit their own light.

Backlighting brightness is typically controlled by using pulse-width modulation (PWM). A voltage is applied through a transistor that turns on and off quickly, and depending on how much time is spent in the on versus off position, various average voltage levels are achieved. This is called the duty cycle. A 50% duty cycle will have the voltage on for 50% of the time, and off for 50% of the time, and the average voltage will be half of the maximum. 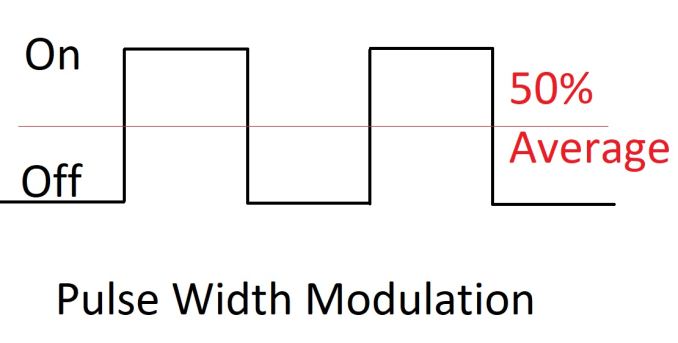 The downside to PWM is that some people can be susceptible to the flickering that can occur, especially if the PWM frequency is too low. If a manufacturer is trying to save costs, they may utilize a cheaper PWM controller which operates at a frequency that is far too low. This can be more noticeable when the display is dimmed, since the amount of time the backlight is on in the duty cycle is much less. Laptops with a PWM frequency in the low hundreds of Hz can have a noticeable flicker, but quality controllers should operate at frequencies around 10 KHz or so, as to not make it noticeable to the human eye.