Liquid crystal displays more or less fall into three categories based on their manufacturer and the driving force behind the liquid crystal. All have their own strengths and weaknesses. Twisted nematic, or TN as it’s often called, is an older display technology. Later, In-Plane Switching, or IPS displays, were developed to combat some of the problems with TN, and a third major technology is the Vertical Aligned, or VA panel.

All LCDs are pretty much built the same, with a backlight, two polarizers, the liquid crystal, and the thin-film transistor which provides the current to the individual pixels. The major difference between the three display types is how the liquid crystal is used to block the backlight for each subpixel.

Generally, laptop displays refresh the image sixty times per second, or at 60 Hertz. Some gaming laptops offer refresh rates at 144 Hz or more, which provide a smoother experience, and both AMD and NVIDIA support variable refresh rates as well. The maximum refresh rate is impacted by the design of the LCD, and the various designs all have different limits and response times.

Twisted nematic, or TN, is the earliest LCD design that’s still used in laptop displays. As the name suggests, the liquid crystal actually twists to allow light through. The design is very simple, with only a single transistor required to drive the process, and therefore it’s the least expensive display to manufacture as well. In addition to it being the lowest cost, it also can operate very quickly, so the TN display is still the panel of choice for many gamers because the panels can hit the high refresh rates like 144 Hz.

While cost and speed are definite advantages of TN, they suffer from quite severe off-angle color shift and are really only usable when viewed directly. Large TN panels can exhibit the color shift even when viewed directly, because of the increasing angle of viewing (relative to the user) as the panel gets further from the center. Even when viewed directly, TN panels offer poor color accuracy as well. Due to these limitations, TN displays have fallen out of favor for most laptops, although they are still regrettably found in some budget devices, and gaming laptops where the higher refresh rate is of more importance than color reproduction.

In-plane switching, or IPS, was developed to provide solutions to the off-angle viewing issues that plague TN displays. The liquid crystal rotates horizontally rather than twisting like a spring in TN, allowing more light through the further it’s rotated, which in turn varies with the amount of voltage applied. This process requires two transistors per subpixel though, which drives up the manufacturing cost. IPS displays are not as quick to operate as a TN one would be either, so driving them to very high refresh rates is difficult. But, this design does offer excellent off-angle viewing, as well as very accurate color reproduction.

And while IPS is a significant step up in quality over TN, it does have some limitations of its own. In particular, it can’t produce the highest contrast ratios, especially compared to Vertical Aligned panels that we’ll look at next. But IPS displays offer the widest viewing angle of any display technology, and keep their color accuracy intact even when viewed at an angle. This makes them ideal for laptops and tablets, and pretty much all quality laptops utilize IPS displays at this point, although this really only started in earnest in the last several years.

Although IPS is the generic class, several manufacturers have created their own version of IPS, such as Samsung’s Plane to Line Switching (PLS) or AU Optronics with their Advanced Hyper-Viewing Angle (AHVA) technology, which by the acronym sounds like it is a VA panel, but it’s actually an IPS design.

The final display LCD display technology that is prevalent in the industry is the vertical alignment, or VA, panel. VA aligns the liquid crystal vertically when no voltage is applied, and with voltage, the crystals shift to the horizontal plane. This mechanism does have some drawbacks to viewing angles, but to counteract this, most VA panels use multi-domain vertical alignment (MVA) with the crystals rotating in different directions. 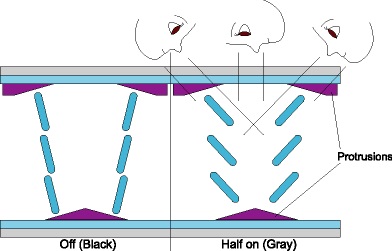 The biggest advantage of VA displays is their contrast ratio capabilities, and modern VA panels can achieve 3000:1 or more contrast. With MVA technology the off-angle viewing is also much better than TN displays, although not as good as IPS displays, and where an IPS display can achieve 178° viewing angles on both the horizontal and vertical planes, a VA panel is going to be around 160° or so depending on the exact type of panel.

The main disadvantage of VA panels is the very slow response time, especially in the gray-to-gray.

VA panels can be found in some computer monitors, but most laptops utilize IPS because the strengths are more suitable to a portable device. VA is still widely used in televisions though, since you generally don’t view them at a very oblique angle, and the increased contrast ratio provides better black levels for movies.

The final display technology that is available in laptops is organic light emitting diode, or OLED. Unlike all the LCD displays, OLED doesn’t require a backlight because the individual subpixels emit light. Because of this, OLED displays offer practically infinite contrast ratio, since the brightness of each subpixel can be varied on a subpixel-by-subpixel basis, and subpixels can be turned off completely.

OLED displays have been used quite a bit in smartphones, and you can even buy OLED televisions, but the technology has not been utilized very much in the PC space.

Although OLED displays offer a lot of advantages over LCD displays, OLED with an RGB (Red Green Blue) matrix of subpixels (aka RGB OLED) is quite expensive to build, especially on a larger panel. The amazing contrast and accurate color reproduction is a benefit, but the cost can be prohibitive. OLED also doesn’t use any power to display a black screen, but to get high brightness levels on a large panel showing a white image can use substantially more energy than a comparable LCD. 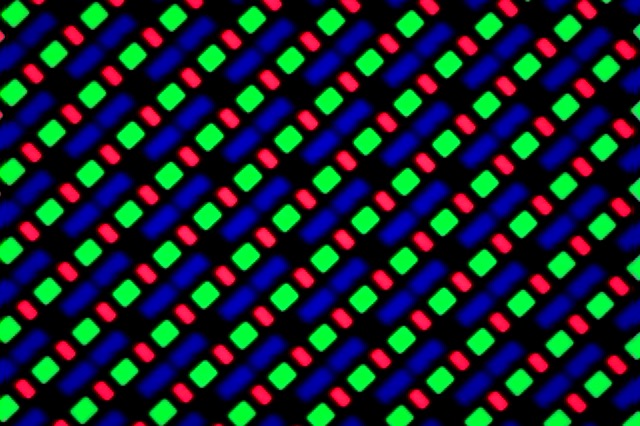 Besides price, the other notable drawback to OLED is that the nature of the technology can limit the longevity of the display. As the subpixels are used to create light in either red, green, or blue, the subpixels themselves age and will dim over time. The different colors also age at different rates – with blue being the fastest to go – and to compensate, the subpixels may not be arranged in a true RGB pattern which can reduce the effective resolution of the device. Because of the different rates, there’s also a chance of burn-in if a static image is left on the display for a long period of time, a problem which in turn can be mitigated, though not entirely.

Currently televisions that use OLED are almost exclusively built on a different technology than what you’d see in smartphones and laptops. Right now, LG owns the OLED TV market and produces panels for everyone else using WOLED, which is a white OLED subpixel that is paired with color filters to convert said subpixels to red, green, or blue subpixels. This allows the panels to be manufactured for a cost that people can actually afford, and partially mitigates burn-in since all subpixels have a similar life-expectancy curve. However WOLED subpixels will still age faster or slower depending on how heavily they're used, so burn-in can still be an issue.

Samsung is reportedly looking into something similar, but will use a blue OLED as the base and quantum dots as the filter/converter. But neither of these technologies are used in laptops at the moment, so when you see an OLED TV for several thousand, and wonder why an OLED PC monitor is double the cost for a quarter the size, just know that all things are not created equally.

OLED also can have an issue with ghosting as well, although inserting black frames in between images can reduce that effect.

Due to the cost, high power usage, and aging issues, OLED is currently not ideal for use in laptops, and although it can be stunning to see in a laptop, it does have its drawbacks.