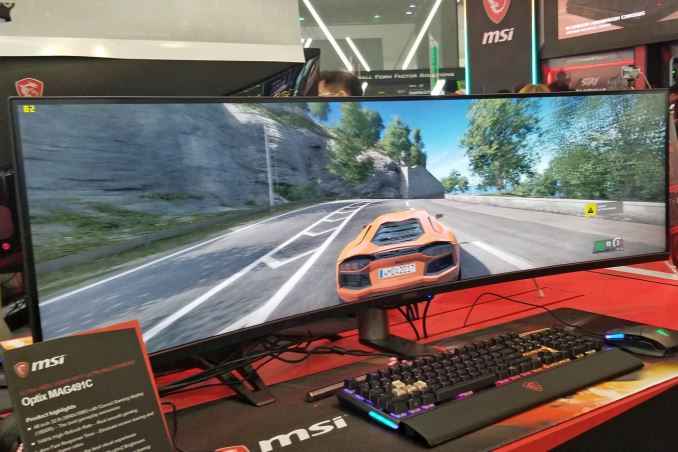 While MSI may be best known for motherboards and laptops, the company is making a big play at the monitor market as well. And this is in a quite literal way with their latest monitor, the Optix MAG491C. At 49 inches, the Optix MAG491C is closer in size to a TV than a monitor, providing significant screen real estate for playing high-end games or multitasking. Due out later this year for an estimated price of $999, this curved beauty can even fool your computer into thinking that it's two separate displays.

We had a chance to spend a few minutes playing Project Cars on the Optix MAG491C and were impressed both with the smoothness and just how easy it was to see the full screen without turning our heads. The surface is curved in just the right way so that you benefit from the width while keeping the entire image within your field of view.

The game was extremely smooth, with no ghosting or tearing evident. Perhaps that's because the MAG491C has a 144Hz refresh rate with a 3ms response time. The bright panel promises to reproduce 100% of the sRGB color gamut while outputting a luminous 400 nits of brightness.

You might think that a monitor of this size would have a 4K (or even 8K) resolution but the MAG491C has fewer vertical pixels than those standards require. It has the same 3,840 horizontal pixels as UHD, but only 1,080 vertical dots. That makes the display equivalent to putting two full HD (1920 x 1080) monitors right next to each other. 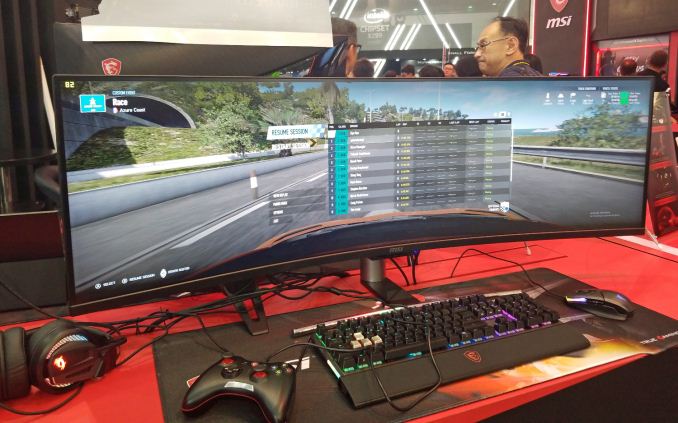 In fact, the coolest feature of the MAG491C is its ability to enter picture-by-picture mode, where it takes two separate inputs and gives each one half of the screen. So, if you really like the convenience of having dual monitors but don't like seeing an ugly bezel between them, MSI's screen could be your dream come true.

You just run two wires from your PC (or one each from different computers) into the MAG491C and Windows thinks you are connected to two separate physical monitors. If it were a full 4K (3840 x 2160), each half would be 1920 x 2160, an odd resolution that many computers probably don't support. The MAG491C also supports picture-in-picture mode, which displays a small window with the secondary input rather than giving each input half of the panel.

If you want the most responsive monitor you can get, you may be more excited about MSI's 25-inch TN panel based Oculux NXG251. This monitor refreshes at an astounding 240Hz with an amazing 0.5ms response time. To put that in perspective, most high-speed gaming panels are running at 144Hz with a 3-5ms response time. The panel is MSI's first display with a G-Sync module inside it as well. 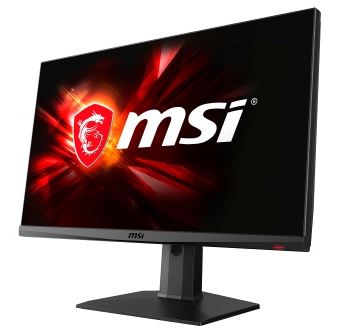 With G-Sync and the high refresh rate, you can run some games at over 200 fps, without any ghosting at all. Due out later this year, the NXG251 also provides 300 nits of brightness. In our brief time staring at the screen, colors appeared even brighter and more saturated than on the MAG491C.

Pricing was estimated to be around $999 for the MAG491C due out later this year while the Oculux NXG251 will be available in Q4 this year with a price tag of $599 - a bit of sticker shock for a FHD monitor. We will update with more information as it is received.

More coverage from Computex 2018 is below.

Avram Piltch contributed to this article.