The ASUS Z370-I Gaming motherboard has the same BIOS look at setup as we saw in the Z370 Apex review. It uses the 'ROG Red' background with the data being presented on a grey background with white and yellow writing. Like most motherboards, this board starts with the EZ Mode. 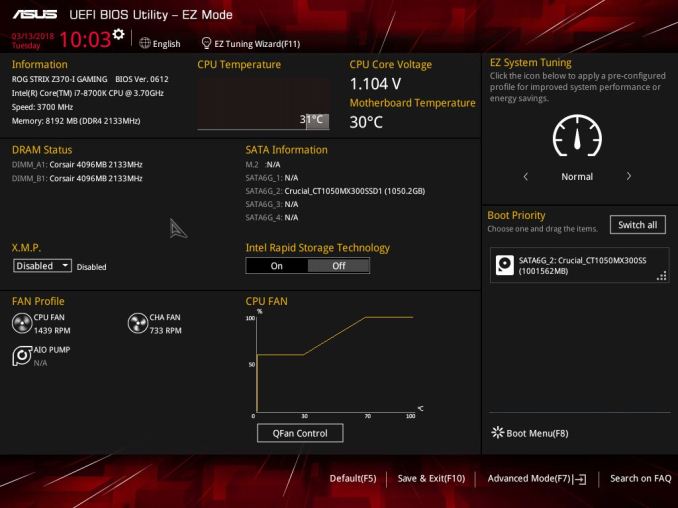 EZ Mode presents users with an informative dashboard displaying high-level system information. Included in this panel is the status of the memory, SATA information, installed CPU and BIOS, as well as fan information and temperature and voltage of the CPU. Users are also able to switch boot priority and enabled EZ System Tuning from here as well. 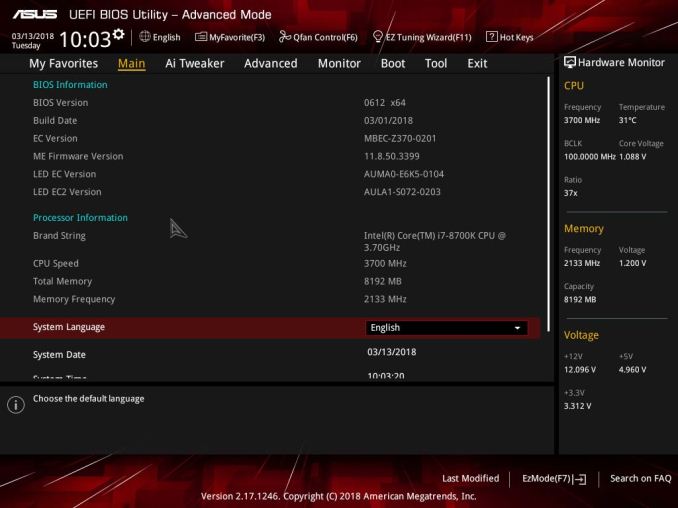 When switching over to advanced mode, users will find themselves at the AI iTweaker screen. To the left of Ai Tweaker is the Main tab (above). That header contains some more information about the BIOS and Processor and allows the system language to be changed. 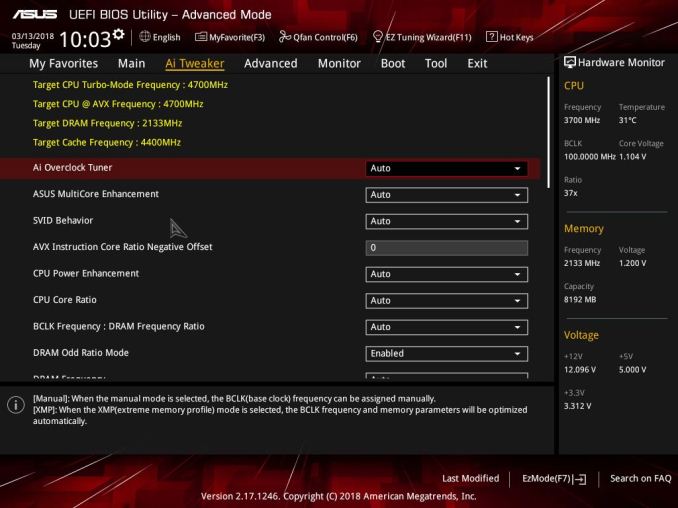 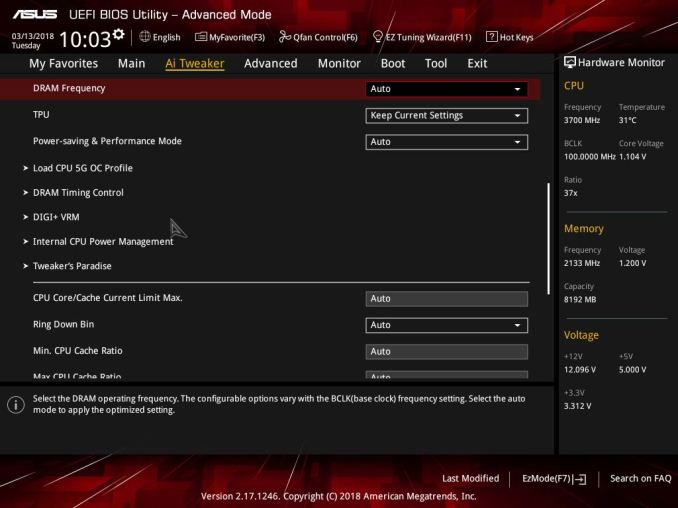 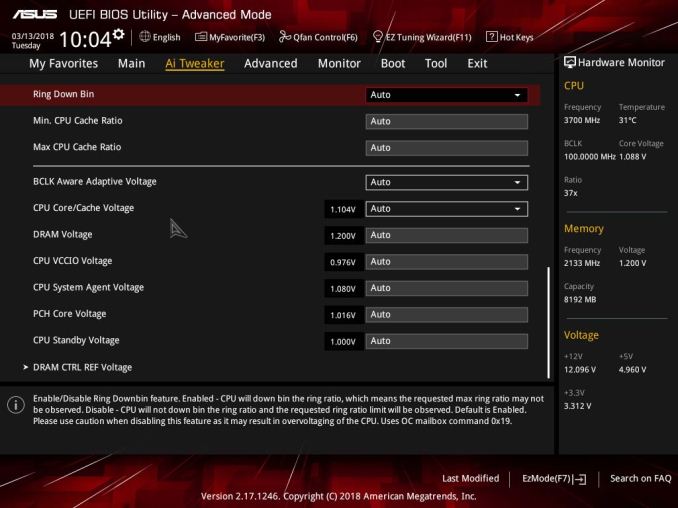 The AI Tweaker section is where users will find the options to overclock the installed CPU as well as make changes to memory speed/timings, power saving features and other details of the processor and memory. The BIOS offers users option to push the CPU or memory to the limit. About the only things I note are missing here are the more extreme overclocking profiles that were provided with the Apex, if only because the Apex is the bigger overclocking focused cousin. That said, this is a Mini-ITX board so I can't imagine anyone expects those to be included either. 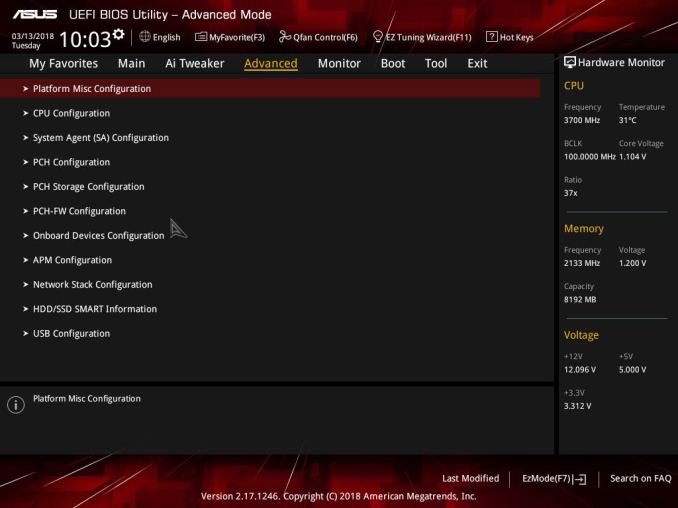 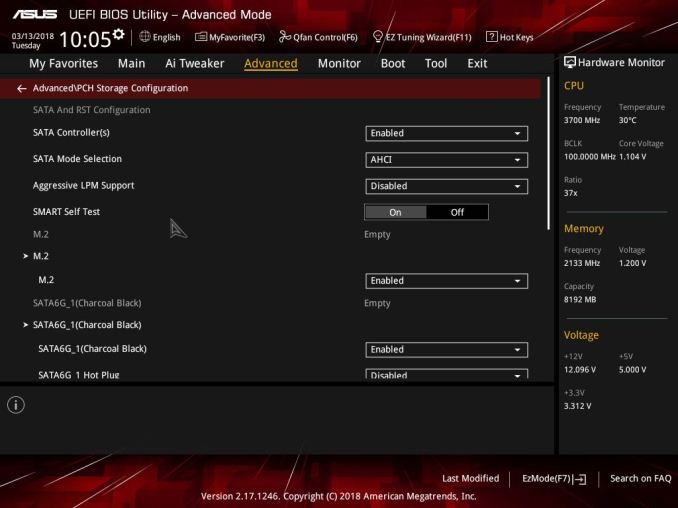 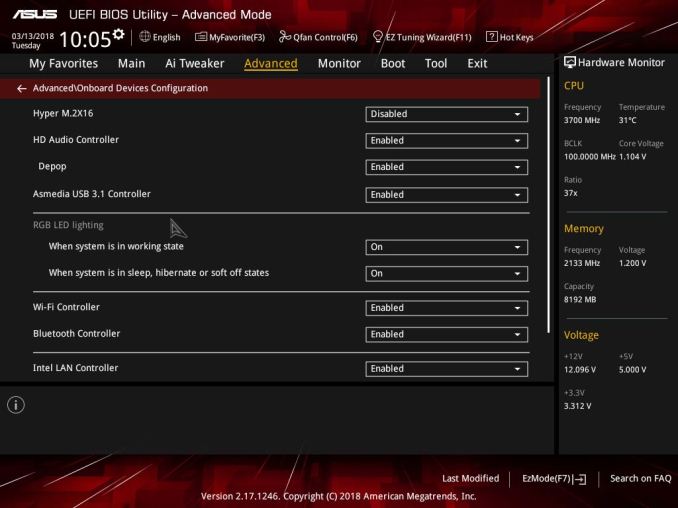 The Advanced section of the BIOS displays a plethora of sub-headings underneath. Each section allows for control over something different. From the CPU and storage configuration to the configuration of the onboard devices such as audio and USB controllers, Wi-Fi, LAN, all board level functionality can be found here. 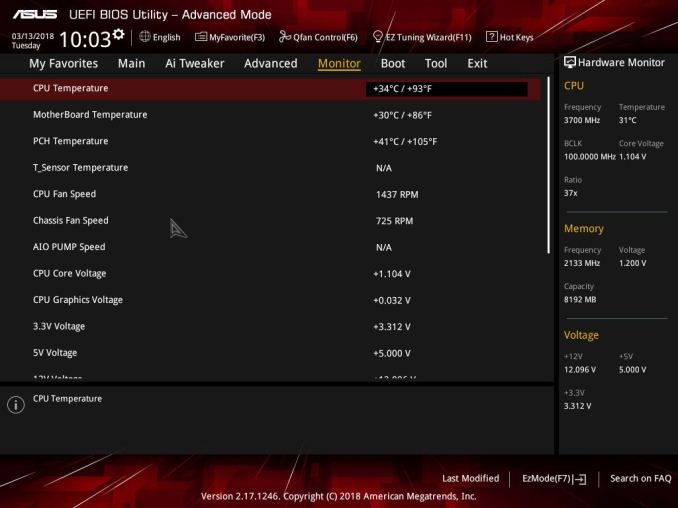 The Monitor section displays temperatures, fan speeds, and voltages of the system. Within this section is where we are able to find the Q-Fan settings which will test the fans/pump attached to the headers to determine their range and allow to set custom profiles accordingly. 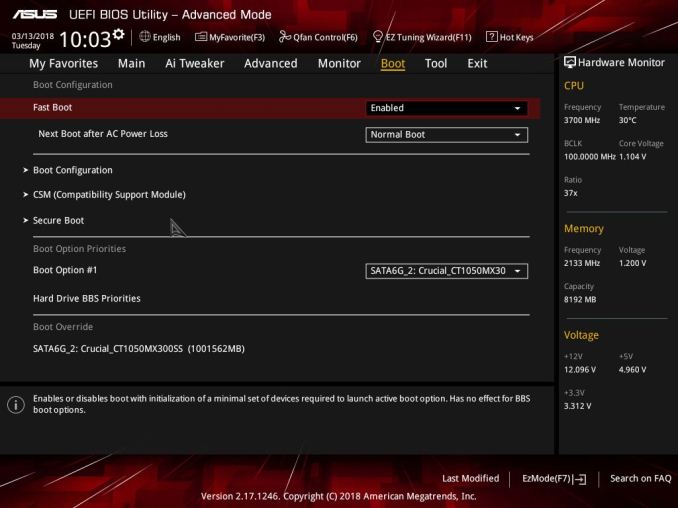 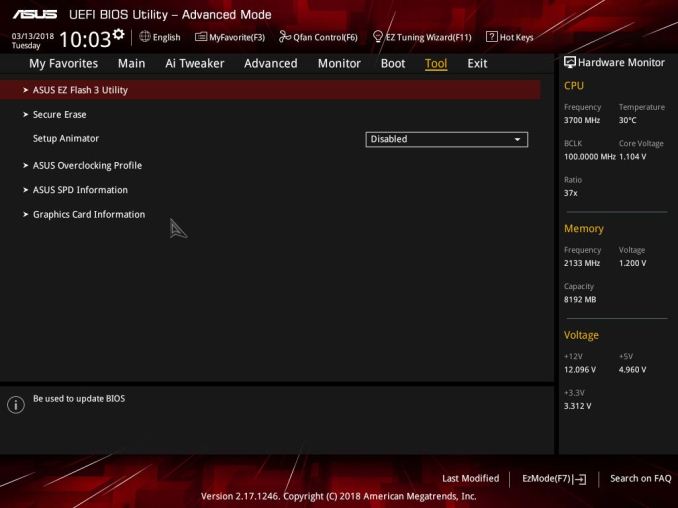 The Tool section contains functions to reset your BIOS in the ASUS EZ Flash 3 Utility, save overclocking profiles, as well as gather DRAM SPD and Graphics card information. ASUS also includes Secure Erase functionality to wipe your SSD's out and bring them back to that factory fresh feeling.

Each retail motherboard will come with a driver disk which includes the drivers to get thesystem up and running smoothly. These disks also include other utility type applications from the board partner, for example, RamCache, Cloning, and other utilities. 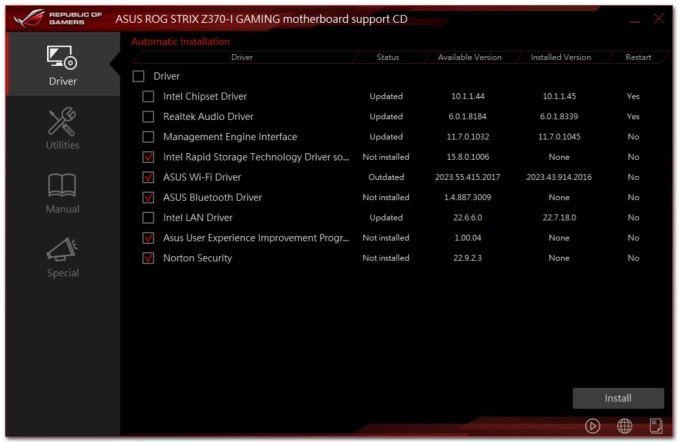 The picture above is of the driver section. We are able to see the shot was taken after everything was installed. The screen is pretty information showing the status of said software, the available version (on the disk) as well as the installed version. It also tells users if said installation will require a restart. 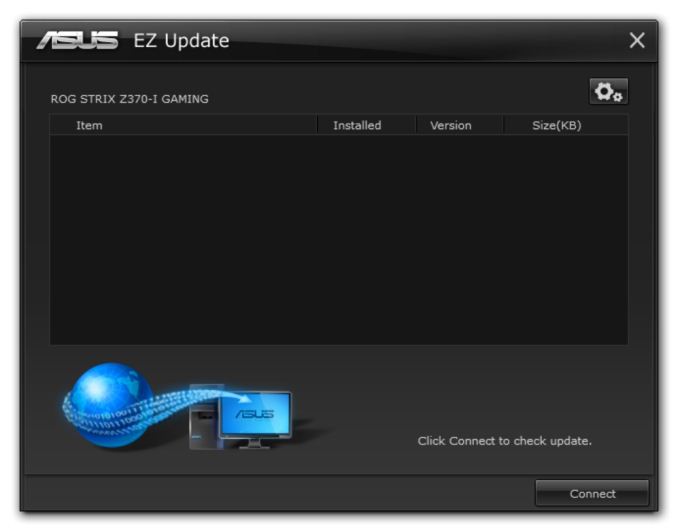 While the installation disks do have what is needed to get going, the files can be outdated depending on when the moterboard was purchased. To that end, ASUS has an EZ Update application which will search the ASUS website for updated drivers and get them installed on the system. 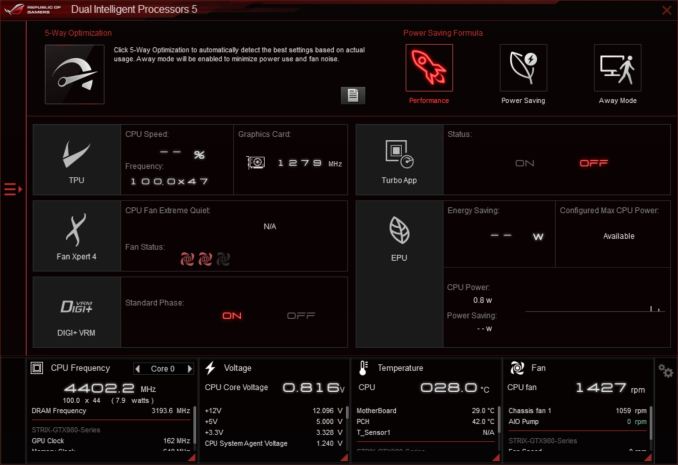 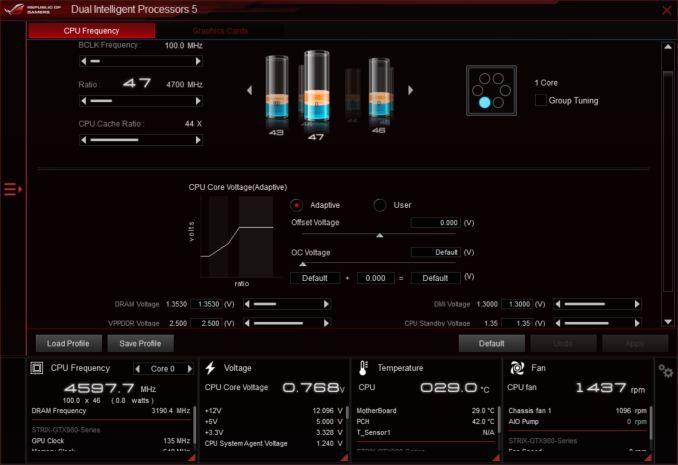 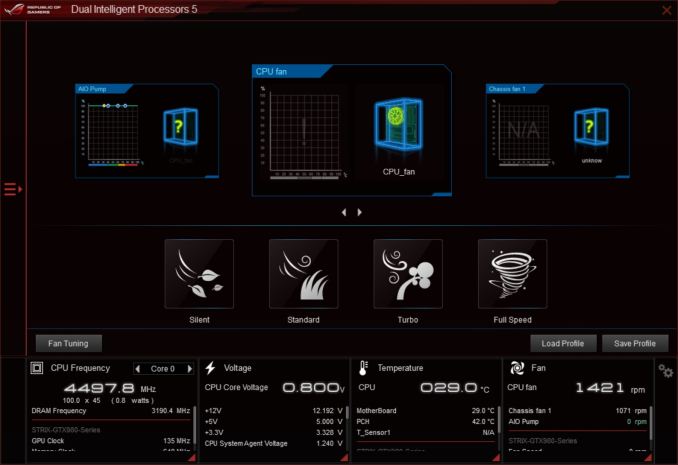 ASUS' AISuite software is a Windows based solution designed to monitor and control the system. The top portion of the window will change depending on which section is selected. Users are able to choose from a few different sections rach with their own distinct function. For example, the TPU section is for overclocking, EPU for power management, and FanExpert 4 to control system cooling. Overall it is a comprehensive suite and a good tool to use in conjunction with the system BIOS. 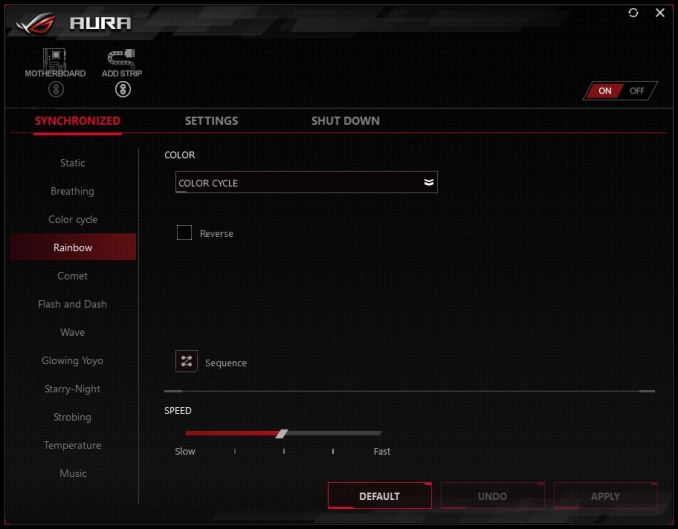 RGB lighting has made its way into just about every peripheral we can attach to our PCs. ASUS' uses its Aura software to to setup and configure the RGB LEDs on the board as well as any attached on the headers. There are several preset modes to choose from as well as being able to work by temperature or with music. 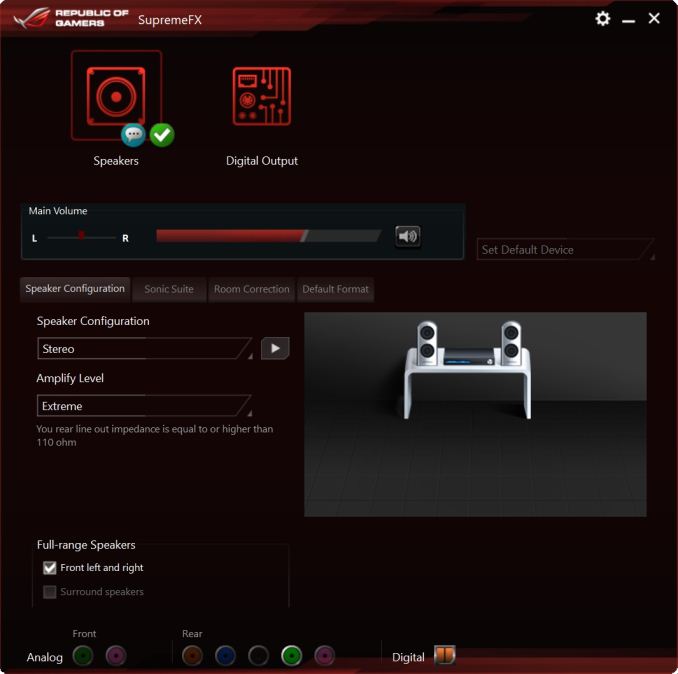 ASUS uses a tweaked version of the popular Realtek ALC1220 codec on the Z370-I Gaming, and as such we see a ROG themed version of the Realtek software. Between this and Sonic Studio 3 software, users are able to control all aspects of the audio from levels to surround sound.